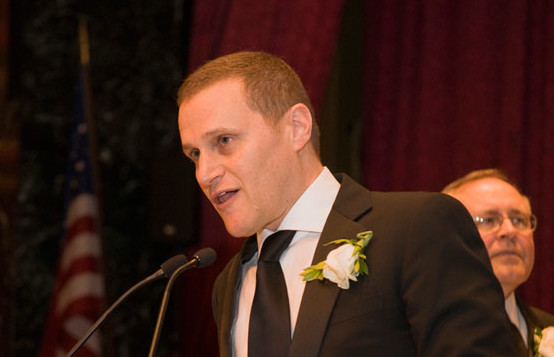 On January 18, 2018, at our 122nd Annual Banquet at the New York Hilton, I will have the great honor of presenting my friend and our Chairman, Rob Speyer, with the Real Estate Board of New York’s prestigious Harry B. Helmsley Distinguished New Yorker Award.

Under Rob’s leadership, REBNY has achieved some major successes and tackled a number of difficult challenges. Over his five-year term as REBNY Chairman, Rob has crafted an impressive legacy. The following is just a short list of the many accomplishments made possible through Rob’s active support:

A shining example of Rob’s leadership became clear to me during the tumultuous negotiations over the expiration of the 421-a tax abatement. The initiative, which is now known as the Affordable New York Housing Program, is vital to the development of new affordable housing throughout the five boroughs. For a while after the program expired, its future was uncertain.

Throughout the course of the often difficult negotiations, Rob never wavered.  When others were ready to throw in the towel, Rob persevered and made sure we all remained focused on the need to produce more affordable housing as well as a fair wage. The program might look very different – or might not even exist today – if it wasn’t for Rob’s steady and determined leadership.

Back in 2013, at the age of 42, Rob became the youngest person ever to lead REBNY, as well as the third generation of his distinguished family to serve as Chairman.  The fact that Rob agreed to serve for an additional two years after his original term expired demonstrates his exceptional commitment to the real estate community, as well as the tremendous confidence that REBNY’s members have in him.

Rob guided REBNY through two mayoral administrations and various significant policy challenges. He is also Chairman of the Advisory Board of the Mayor’s Fund to Advance New York City, appointed by Mayor Bloomberg in 2006 and reappointed by Mayor de Blasio in 2014.

Notwithstanding his civic responsibilities, Rob is leading Tishman Speyer during one of its strongest periods of growth globally.  As President and CEO, Rob oversees roughly 100 million square feet of commercial and residential real estate around the world.

Closer to home, Rob is responsible for the management of some of New York’s most iconic landmarks like Rockefeller Center, the Chrysler Building and the MetLife Building. If that weren’t enough, Rob is overseeing more than eight million square feet of new, ground-up development in Long Island City, Downtown Brooklyn and Manhattan’s Far West Side, which makes this the most active period ever for Tishman Speyer in New York City.

On a personal note, I have witnessed firsthand the many ways that Rob exemplifies what it means to be a leader. When I arrived at REBNY in 2015, I had enormous shoes to fill – for three decades, REBNY’s president Steven Spinola had served with distinction. How an organization responds to new leadership, after such a long period of steady and accomplished guidance, can be difficult in some cases.  Rob did everything possible to ensure that my transition into the REBNY presidency was seamless. I am grateful to Rob for leading the process that led to my selection and for providing all of the guidance and support I could have ever asked for – and then some.

We have been fortunate to be led by Rob Speyer for the past five years. Thanks to his tireless efforts, REBNY is stronger than ever before.  Please join me in honoring his already extraordinary career – which is nowhere near over, and for that, New York’s real estate industry ought to be exceptionally thankful.

REBNY members in Brooklyn: Bolster your public speaking and presentation skills by completing the Residential Education Committee’s Public Speaking & Presentation Skills Six-Week Course to be held at 1 Metro Tech Center. Classes will be held from 6 to 8 p.m. on select Mondays and Tuesdays starting November 14th and running through December 18th. The full, six-week course is $75 for REBNY members. For all class dates and to register, visit rebny.com.

Scott Rechler will headline our Annual Commercial Holiday Luncheon on Monday, December 4,  from 12 to 2 p.m. As Chief Executive Officer and Chairman, he has led RXR Realty LLC to become one of the largest owners, managers, and developers in the New York Tri-State area. Earlier this year, Governor Andrew Cuomo appointed Rechler to serve on the Metropolitan Transportation Authority board. He is highly respected for his ability to solve problems and seize opportunities to breathe new life into buildings and businesses. Join us next month as Scott Rechler discusses his strategy for keeping New York City economically competitive in the 21st Century. Register online. For more information about this event, including available sponsorship opportunities, email commercialbrokerage@rebny.com