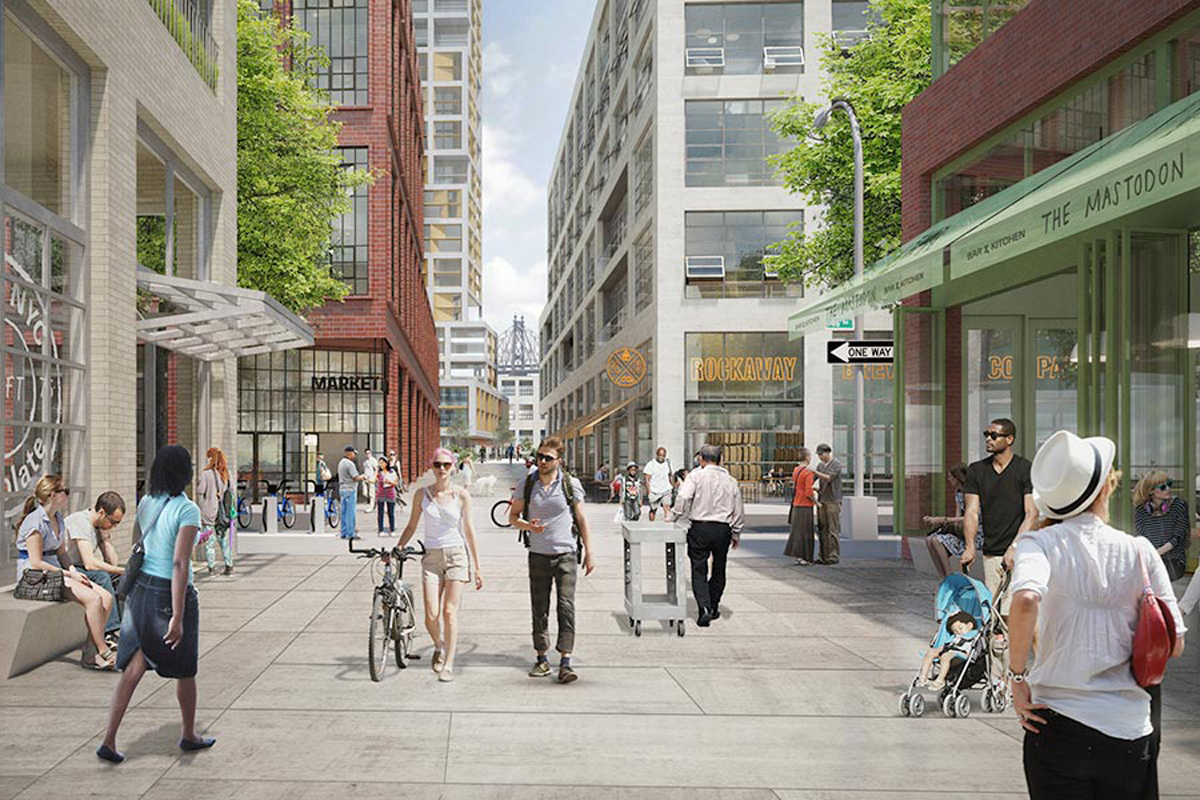 Plaxall, a Long Island City-based plastics manufacturer and real estate company, has proposed a special zoning district that would allow it to turn nearly 15 acres of underdeveloped industrial land in Hunters Point into a mixed-use waterfront hub.

Dubbing the project Anable Basin, a reference to the man-made inlet around which the district will be built, the family-owned company envisions a mixed-use development with high-rise apartment buildings, ground-floor retail and light industrial workspace, according to a press release issued by Plaxall.

Online renderings show about a dozen buildings of various heights surrounding the canal, with primary boundaries including 45th Avenue to the north, 46th Road to the south and Vernon Boulevard to the east. Digital images of trendy restaurant-lined streets with Queensboro Bridge vistas evoke a DUMBO-like aesthetic.

In total, the project aims to build a 335,000-sf “innovation hub” aimed at creative production and light industrial companies as well as 4,995 apartments, roughly 1,250 of which would meet the city’s standard for affordable housing.

Pre-certification documents and an Environmental Assessment Statement for the proposed district have been submitted to the City Planning Department.

Plaxall is a 70-year-old company started by Louis Pfohl a pioneer of a plastic-molding technology known as thermoforming. Over time, the company also collected properties and now Pfohl’s descendants also manage a real estate portfolio.

As tradeoffs for the zoning change, the company is offering to build a 700-seat school on 11th Street between 46th Road and 47th Avenue, community use facilities, new public walkways, greater access to the basin as well as flood-resistant barriers around the water.

Also known as the 11th Street Basin, the Anable Basin is a 1,000-foot-long waterway used to service the various manufacturing outfits that once dotted Long Island City’s East River waterfront. Today, it remains largely used with the exception of a community-owned floating dock used for kayak lessons.

If implemented, the plan would connect to the adjacent Gantry Plaza State Park, which is home to the often-Instagrammed Pepsi-Cola sign. It would also overtake the parking lot used for the weekly LIC Flea & Food market, one of several community initiatives sponsored by Plaxall.

With a planned development schedule of 15 years, Plaxall is targeting a tentative start date in 2020, although it still must go through the city’s Uniform Land Use Review Procedure. The company owns 12.6 of the 14.7 acres involved in the proposed district and plans to serve as master developer for the project if it gets approval.

Although Plaxall has been discussing the project informally for several years, a pre-application statement was not filed until September 2016. It hopes to wrap up the process next year.