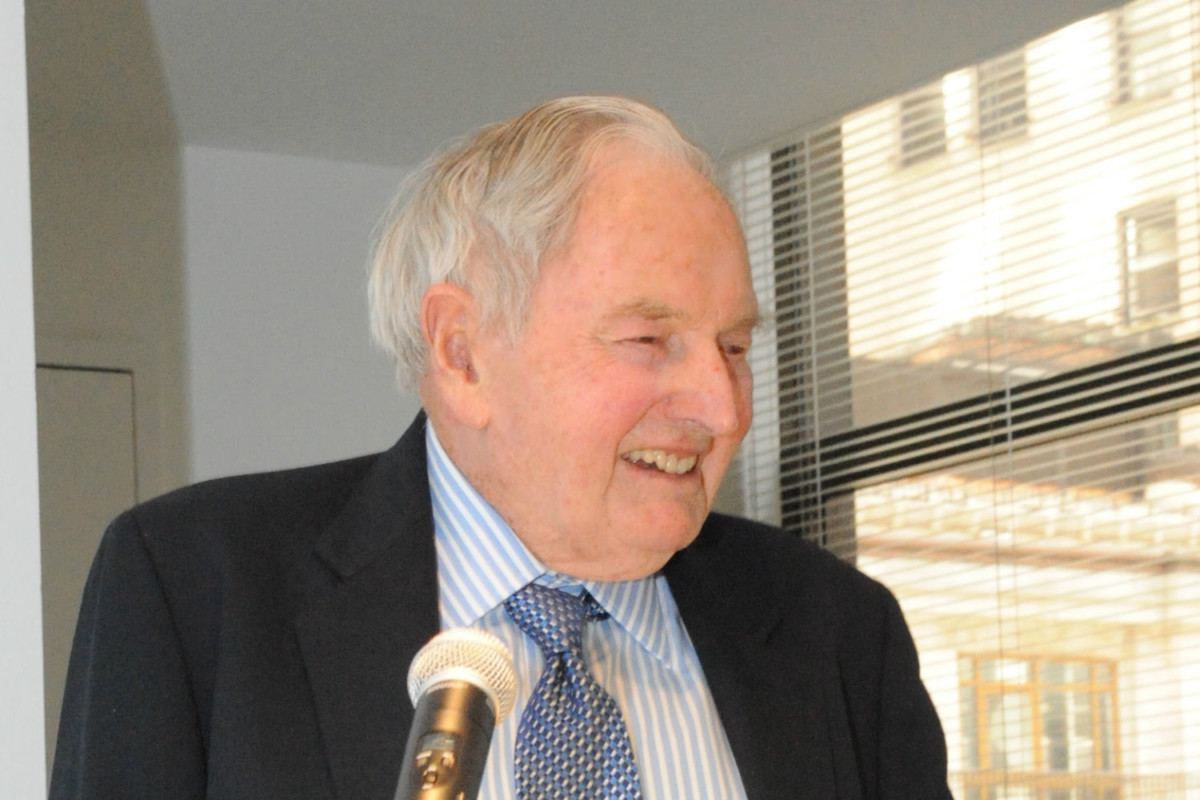 David Rockefeller, who founded the Downtown Alliance’s parent organization, the Downtown- Lower Manhattan Association, and whose advocacy helped ensure the rebirth and growth of Lower Manhattan, has died at his home in Pocantico Hills, New York. He was 101 years old.

Mr. Rockefeller was the chairman and CEO of Chase Manhattan Bank and the former chairman of the board of the Rockefeller Group. A businessman, philanthropist and global statesman, he was a role model of civic leadership whose influence extended far beyond Manhattan.

Jessica Lappin President of both the Alliance for Downtown New York and the Downtown-Lower Manhattan Association remembered Rockefeller as “a man whose vision was synonymous with the long term. What he saw and helped bring about could be measured in decades and generations, not mere weeks, months or years.”

David Rockefeller is credited with spurring the rebirth of Lower Manhattan more than five decades ago. In the early 1950s, the historic neighborhood where George Washington took the presidential oath was declining. The streets were dark and deserted, and many companies were leaving. That all changed after Mr. Rockefeller, who was leading the effort to build Chase Manhattan Bank’s new headquarters, convinced the board to locate not in midtown, but in the heart of the financial district. 1 Chase Manhattan Plaza opened in 1960, providing a new and sunny public space and improving the overall reputation of Lower Manhattan.

“In retrospect, it was a risky decision, but we hedged our bets by trying to convince others that remaining Downtown was not only in their best interests but also in the best interests of the community as a whole,” Rockefeller said in an interview with the Downtown Alliance. “Our commitment to both stay and build a new headquarters convinced a number of other banks, brokerage houses, and, indeed, the New York Stock Exchange, to remain Downtown and to upgrade their own facilities.”

Fosun International issued a statement saying the company was “deeply saddened” to learn of Mr Rockefeller’s death. Fosun is the current owner of One Chase Manhattan Plaza, the landmarked tower  now known as 28 Liberty. “The building is one of the many pieces of his  legacy,” said Fosun. “Mr. Rockefeller was a great man whose vision and energy helped to sustain the character of New York City and the United States.

David Rockefeller was born in 1915 in New York City, the youngest child of John D. Rockefeller, Jr. and Abby Aldrich Rockefeller. He graduated from Harvard University in 1936 and received a Ph.D. in economics from the University of Chicago in 1940. In 1940 and 1941, he was secretary to New York City Mayor Fiorello H. La Guardia and later became assistant regional director of the United States Office of Defense, Health and Welfare Service. He enlisted in the U.S. Army in May, 1942, serving in North Africa and France during World War II. In 1946, he joined Chase National Bank, rose through the ranks and became chief executive officer in 1969. He retired in 1981.

At a ceremony honoring Rockefeller in 2000, the Alliance for Downtown New York’s Chair at the time Robert R. Douglass said that his longtime friend had “done more for Downtown, over a longer period, than anyone… From his time as assistant to Fiorello La Guardia, to his years as head of the Chase and the Downtown-Lower Manhattan Association, David’s vision, perseverance and great skill laid the groundwork for today’s success.”

Mr. Rockefeller made significant contributions to many institutions, serving as the chairman of the Council on Foreign Relations, the Americas Society/ Council of the Americas, the Trilateral Commission and the Partnership for New York City.  He founded the Stones Barns Center for Food and Agriculture and helped to establish the David Rockefeller Center for Latin American Studies at Harvard University.

He is survived by four daughters and two sons. His wife of 55 years, Margaret, died in March, 1996.