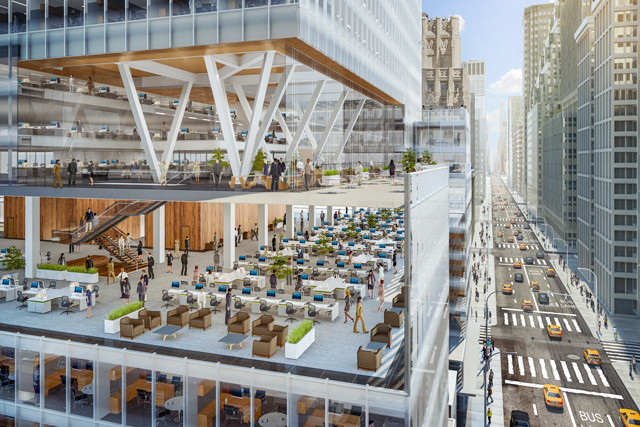 L&L bags another award, this time for 390 Madison Avenue

L&L Holding Company has earned a 2016 Design Award from the American Institute of Architects New York City Chapter (AIANYC) for its redevelopment of 390 Madison Avenue.

With 390 Madison Avenue, L&L Holding Company and its project architect, Kohn Pederson Fox Associates (KPF), have undertaken the most ambitious re-massing of an office building in New York City history.

Millions of pounds of steel and concrete will be removed from the base of the building and eight new floors will be added to the top of the building.

L&L and KPF, along with Tishman Construction, are re-imagining of the 1950’s era office building, with new new column-free spans and a brand new façade.

“We are honored to be recognized by such a prestigious group representing New York City’s greatest architects,” said L&L Holding Chairman and CEO David Levinson.

“Working in close collaboration with our many partners, we are dedicated to staying ahead of the curve in terms of understanding the evolving urban landscape and responding to the changing needs of top companies and the modern workforce.”

L&L Holding President and Chief Investment Officer Robert Lapidus, dded  “We believe that the AIA’s 2016 Design Award serves to validate our commitment to reimagining the outdated office stock in NYC and we believe that this project will become a template for other developers.”

The AIA award comes just weeks after L&L Holding was honored as the “Developer of the Year” by the Greater New York Construction User Council.

In addition to 390 Madison, the Council expressed admiration for L&L’s work at the Norman Foster-designed 425 Park Avenue, which will be the first full-block office development on this historic stretch in half a century.

The firm recently announced an agreement with Citadel to lease 200,000 s/f in the tower, which will be completed in 2018.

In addition, L&L Holding Company was named a finalist for an excellence award by the New York chapter of the Urban Land Institute for its work at 114 Fifth Avenue where L&L completed a $70 million building-wide redevelopment.

The company won widespread acclaim for its work at 200 Fifth Avenue, and it is also undertaking a multi-million dollar retail redevelopment at 195 Broadway.

On The Scene: EPIC announces exclusives, ModernSpaces in Jamaica