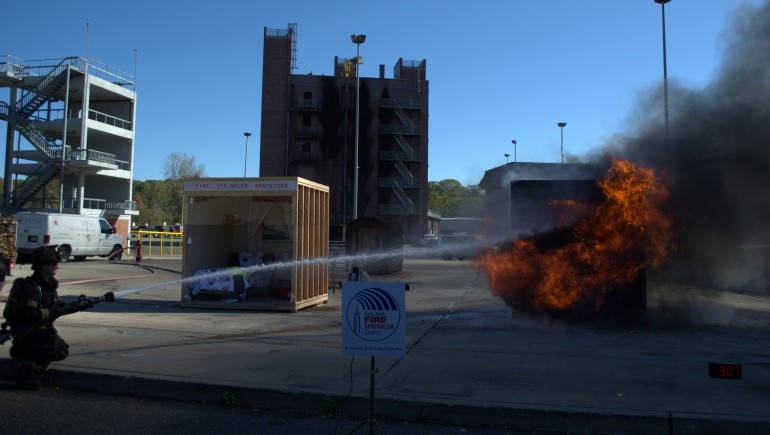 The event was hosted by the New York Fire Sprinkler Council, a division of the Mechanical Contractors Association of New York, Inc. (MCA).

“At this point, the combustion has created a condition that is uninhabitable and the survivability in the room is zero,” said commentator Tim Bowe, president of ABCO Peerless Sprinkler Corporation.

The second unit, equipped with sprinklers, detected a major change in room temperature and automatically responded to suppress and then extinguish the blaze, leaving minimal damage to the unit and furniture.

The National Fire Protection Association (NFPA) finds that sprinklers reduce fire fatalities by about 80 percent and property damage by 70 p3rcent.

In 2014, there were 1.3 million fires resulting in 3,275 civilian fatalities and more than $11 billion in property damage, according to the NFPA.

“Raising awareness about the life-saving benefits of sprinklers is one of our main goals at the New York Fire Sprinkler Council. In the U.S., a structural fire occurs every 64 seconds and there is a fire-related fatality every 2 hours and 41 minutes,” said Tony Saporito, executive vice president of the Mechanical Contractors Association.

“Fire sprinklers save lives time and time again. It’s a long-term investment that every parent should consider for their home and inquire about before sending their children to college.”

Sprinklers are getting more attention in Congress and with regulators because testing by both Underwriters Laboratories and NIST find that today’s home fires of reach flashover in less than four-minutes, or about 800 percent faster than in decades past.

This is due to the increased use of petroleum-based products in modern furnishings and construction methods.

The 2015 International Residential (Building) Code mandates sprinklers in any new one- and two-story residences.
While the New York Fire Prevention and Building Code Council recently voted to adopt the 2015 International Residential Code, the groups opted to remove its requirement to sprinkler new one- and two-family dwellings.

This September, the federal Fire Sprinkler Incentive Act of 2015 was introduced in the House of Representatives and U.S. Senate to strengthen and expedite tax incentives for larger property owners to add sprinklers.

Members of the Mechanical Contractors Association of New York, Inc. are responsible for fire-suppression in tens of thousands of high-density residential and commercial buildings, including, hospitals and industrial facilities.