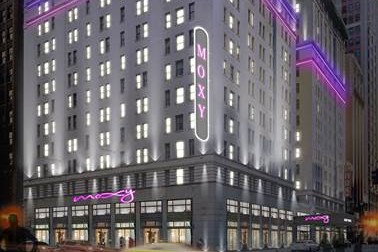 Square Mile Capital Management and Lightstone Group announced the closing of loans totaling $330 million for the development and construction of a 618-key Marriott Moxy Hotel in the Times Square South submarket.

The financings consisted of a $205 million construction loan originated by Square Mile, while the remaining capital was provided by two institutional investors.

Lightstone, a l national real estate investor/developer, is embarking on a complete adaptive repositioning of an existing 16-story property located at the intersection of 37th Street and 7th Avenue.

The property was built in 1907 as a 1,885-room single room occupancy building before being converted in the 1980s to its most recent office/retail use.

The developer said the proeprty is well positioned now for hotel conversion due to its “grandfathered” zoning status and the existing light and air due to its prototypical H-shape floorplate that would not be possible to construct ground-up today.

Its original SRO design makes it ideal for use as a micro/pod-style hotel, according to the developer.

For its current conversion, Lightstone vacated the former office tenants, and the property’s interior has been demolished and is in process of being renovated.

In addition to the flagship Moxy, three other Moxy Hotels are currently slated for development by Lightstone in New York City.  “Marriott is the leader in defining the next generation travel and lifestyle space and Moxy hotels are fun concentrated-format lifestyle hotels with smartly designed and technologically advanced rooms, coupled with generous socially activated public space,” said Mitchell Hochberg, president of Lightstone.

“It also establishes a lending relationship with Lightstone, who will be at the forefront of the trend developing two additional hotels of this type under the Moxy brand.  Marriott’s first-time involvement at the brand level made this transaction even more compelling.”

He continued, “It also represents a milestone transaction for us, given that it is the largest construction loan ever closed by Square Mile. Our debt investment platform has been extremely active during the past year and we are interested in more opportunities in New York City and elsewhere.”