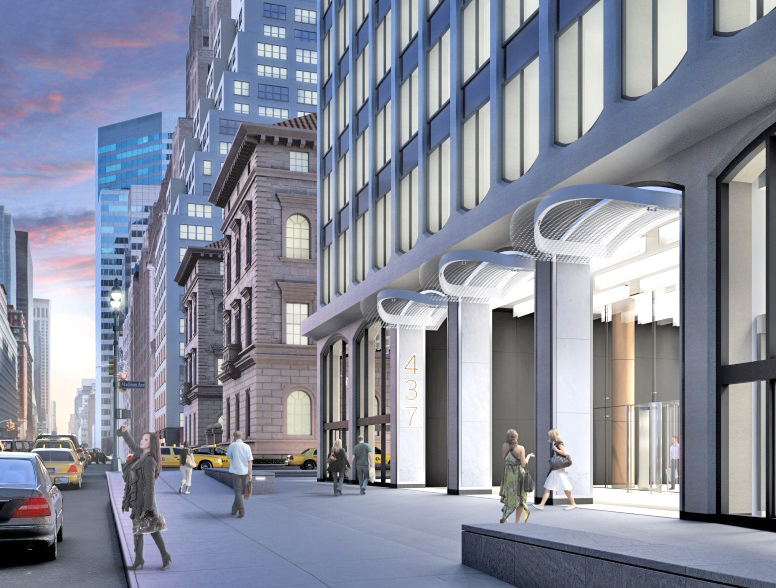 With its ambitious redevelopment project in full force and scheduled to be completed in early 2016, the William Kaufman Organization (WKO) announced that a longtime tenant has signed a 10-year lease renewal at 437 Madison Avenue.

Located on the full block front between East 49th and 50th Streets, the property is near St. Patrick’s Cathedral, Rockefeller Center and Fifth Avenue shopping. The company has been a tenant at the building since 1997.

Michael Lenchner, Vice President and Director of Leasing at Sage Realty Corporation, the leasing and management division of WKO, represented the building’s ownership in-house in the long-term transaction, while Paul Davidson and William Mendelson of Newmark Grubb Knight Frank represented the tenant. Asking rents in the building are from $80 to $110 per rentable square foot.

“We are delighted that Medallion Financial has reaffirmed its commitment to 437 Madison Avenue, which is widely known for its Plaza District prestige and Grand Central convenience,” Lenchner said, noting that Sage is currently in discussions with a number of other tenants for the available pre-built spaces and entire floors g.

Following an investigation of comparable buildings in the market, the NGKF team concluded that it was prudent for Medallion to complete a third cycle of renewal at the Class A property.

“The increased quality and value of the office building, coupled with the existing relationship between Medallion and ownership, proved to be deciding factors that led the company to stay on as a tenant in its current facility,” said Davidson.

When the $60 million capital improvement program is finalized early this year, 437 Madison will boast entirely new infrastructure and amenities, including a private 15th floor “sky lounge” with views of St. Patrick’s Cathedral and the Midtown skyline.

The building will also include a new, original amenity – garden terrace conference rooms that tenants can reserve for meetings and special functions. Sunrise yoga classes will also be offered to all tenants free of charge.

According to Lenchner, four full floors ranging from 17,400 to 18,650 s/f are available for lease at the building.

Three other entire floors of 14 new pre-builts are under construction, ranging in size from 2,893 to 6,402 s/f. A Jones Lang LaSalle leasing team of Frank Doyle, Cynthia Wasserberger, David Kleiner, and Hayley Shoener is the exclusive leasing agent for the property.