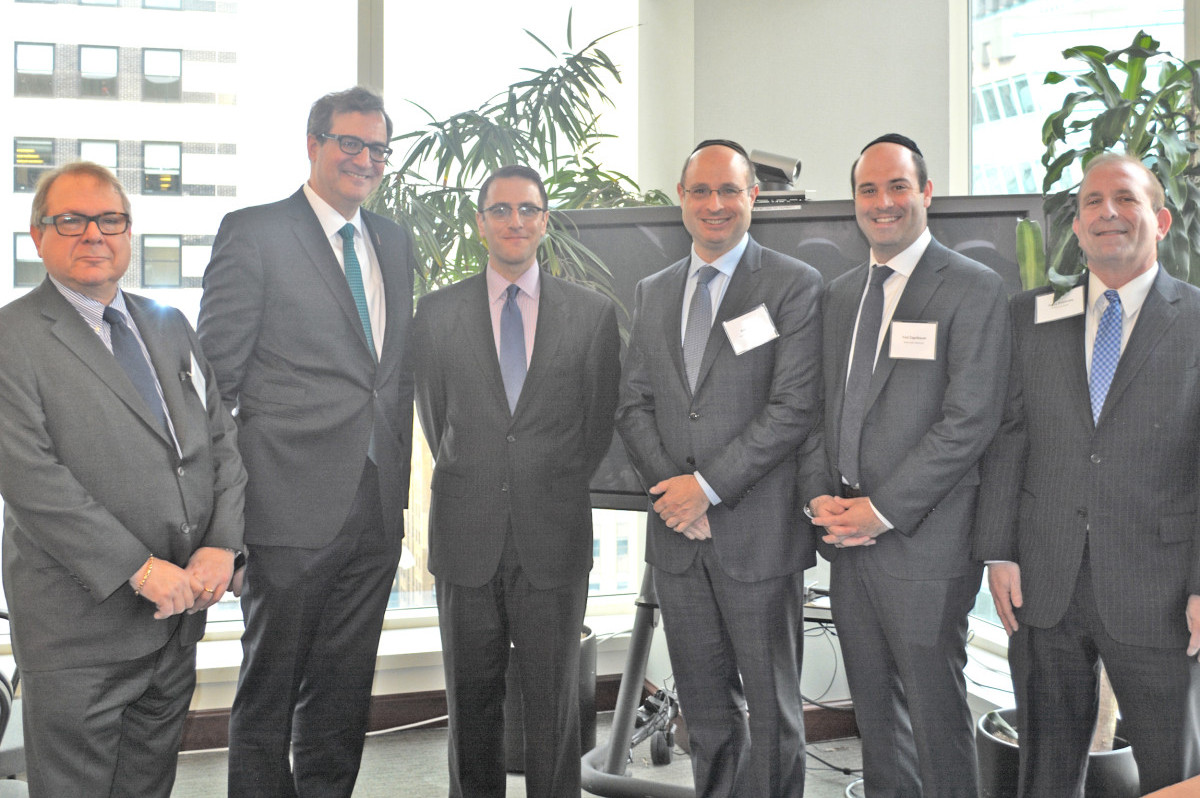 From rising interest rates to instability overseas, it’s difficult to make heads or tails of how commercial real estate might be impacted this year.

“The world is evolving at light speed today, and having an opportunity to hear from and dialog with these two movers and shakers is a fabulous opportunity and a great learning experience for all of us,” Moerdler said.

2015 was a boom year for New York City, Pinsky pointed out. It reached unprecedented heights in terms of population, employment, and tourism, while capital continued to flow into the city from all over the world.

All of those indicate that New York is well positioned over the medium and long term; given global instability, investors are looking to park their capital in places considered safe havens.

“Notwithstanding all the handwringing on the presidential campaign trail, NYC is really is an island of stability,” he said. “All of those reasons are why RXR will continue to invest heavily in the city in 2016.”

Last year, RXR made significant investments in a number of New york City buildings, including purchasing 230 Park Avenue from Invesco and Monday Properties and getting the ball rolling on the purchase of 1285 Avenue of the Americas from AXA Financial and JPMorgan Chase.

But given the city’s success, supply is having a hard time keeping up with demand. The result: skyrocketing prices. In turn, it’s pushing people out into peripheral areas, Pinsky noted. Therefore, RXR is looking more into investing in the outer boroughs and suburban downtowns.

Besides folks in the industry, many people don’t realize how strong a tech mecca New York City is, Herzka noted. The workers want to live in urban areas, “which has driven a lot of the rents and prices with triple effect — in office rents, retail rents, and apartment rents, which reinvigorates the city.” That trend is being felt all over — not only in New York, but California and even markets like Cleveland.

Given it’s a cyclical industry, there will always be market corrections, Pinsky said. Another correction is inevitable; it’s just a question as to when and how much of a correction will occur.

“And the people who don’t prepare are going to suffer the most. We work very hard to be disciplined in our underwriting, making sure we’re sticking to valuations we have faith in,” he noted.

“We have to make sure when we’re structuring deals that we’re putting the right amount of leverage on them so we can ride out a downturn when and if one comes.”

The “when” is the difficult part. But long-term fundamentals for New York City are positive, even if there’s a dip in the short or medium term.

For instance, demand for office space exists even though space per employee has declined. And even with new supply coming online — 15 million to 20 million square feet over the next five years, Pinsky estimated — we’re losing obsolete space to conversions, and not much product has delivered over the past two decades.

“Statistics indicate there’s still, by historical standards, room for the market to run,” he added. “The run-up in rents that have occurred since the trough is barely a fraction of what it usually is in a recovery.

“The biggest questions: Are we able to continue to maintain our quality of life, which is the foundation that underlies our entire success? And can New York remain entirely insulated from global instability?”

The previous real estate collapse was a very short window, Herzka pointed out. “It’s not like the stock market or junk bonds,” he noted. “There was a short period of time that valuations went down, and then there were opportunities because holders of debt were insolvent for other reasons and had to trade out of their assets.”

Today’s sales stem from New York City’s domination by long-term owners and families, as well as more institutional-type owners and those who held on to their real estate without being overleveraged.

“A building a grandfather bought for $100,000 can now be sold for $42 million,” he pointed out. “Those numbers are staggering.”

Herzka warned the market to keep an eye on interest rates, junk bonds, and China’s instability, as they might ultimately affect leverage.

But borrowers, owners, and lenders have been more disciplined throughout the current boom cycle so they can weather the next storm.

“No one’s really over-leveraged today, and if they are taking higher leverage, it’s being priced accordingly with smart money,” he pointed out. “Even if we experience a soft landing, we’ll recover rather quickly.”

However, there are transactions that make Pinsky scratch his head.

“I think some of the speculation in land for development raises some questions, especially in areas outside of Manhattan, where you say, wow, you’d really have to assume a hockey-stock growth in rents to be able to make that work.”

But in general, Pinsky said that the banks he deals with expect buyers to underwrite conservatively and most of his competitors are approaching the market the same way.

“The economy and market will turn at some point, and that’s where we’ll find out who was disciplined and who wasn’t.”

Added Herzka: “As Warren Buffet says, when the tide goes out, we’ll discover who’s been swimming naked. That’s the reality.”

Despite the Fed’s recent decision, Herzka still believes rates are historically low, recalling that when he entered the business in 1983, the market had 16 percent interest rates.

“I had a client who said, ‘Can you imagine, my grandfather got a three percent mortgage. You’ll never see that again in your life.’ Well, we’ve seen that for the last eight years.”

He calls the Fed decision prudent, and while we’ll see increase in short-term rates, he believes the 10-year Treasury will stay within the 2.5 percent mark, barring any global event that might change the course.

Today, investors can get up to 90 percent leverage with several different layers and types of debt, but it’s smart money. “If there’s no real story to a deal, you’re not going to get that,” Herzka pointed out, noting that regulators are getting nervous that the market’s getting a little out of hand again.

He’s noticed pushback on interest-only deals and exit strategies, while in the CMBS market, the demand for paper has fallen.

“A lot of [CMBS] buyers have been looking at their portfolios and ended up with what were really B-rated bonds that are becoming junk, and that’s due a lot to what’s going on in oil and other sectors,” he said.

“We’re definitely seeing some shifts in leverage points as all of these small things are happening. It could correct itself, but the adjustment is not so significant as to cause a major impact on real estate.”

RXR, which tends to capitalize transactions with institutional investors from around the world, has noticed a lot of enthusiasm for investing in New York. “In fact, we’re finding interest from investors from a lot of different corners of the world that we previously hadn’t sourced as investors in our funds,” Pinsky noted. “It’s very encouraging to us and is helping lower the cost of our equity capital.”

Concerns among investors revolve around feeling too exposed to New York City or wondering if they’re buying at the peak, Pinsky noted.

In turn, RXR is more focused on emerging markets within the New York region and explaining to investors that such locations haven’t seen the same run up as core markets.

Pinsky has been tasked to launch RXR’s emerging submarket strategy, which is premised on a “push-pull” observation: as New York continues to attract businesses and core markets become more expensive, people are pushed out; at the same time, changes in the way people live, work, and play are creating a pull from peripheral areas. “We’re looking at those markets in the intersections of those two dynamics.”

“[Residential] demand is so high that we’re not able to keep up with the pace in the city, which is driving up rents and making New York a lot less affordable,” Pinsky pointed out.

“If we want to continue to accommodate this growth and attract the best and the brightest, we somehow have to expand the supply.”

One opportunity: suburban transit nodes. There are great places with efficient access to Manhattan, yet are surrounded by low density or surface parking; think places like New Rochelle, Yonkers, Hempstead, Huntington Station, Glen Cove, and Stamford, where RXR has projects in the pipeline.

“If you keep trying to cram more and more material into the same sized bag, eventually you’re going to reach capacity,” he continued. “So your only option is to increase the size of the bag, and we have the ability to do that with our transportation infrastructure.”

“My view is that some degree of caution is appropriate at this time, and the strategy of looking to the suburban and outer-borough markets for further development will prove to be an excellent strategy in the long-term,” Kaiser responded.

What we’re seeing in the presidential election is reflective of a larger issue we need to address, Pinsky contents: a significant amount of our population feels as if they’re getting a raw deal. “That’s not good for a country,” he noted.

“The bottom line is that it’s important for us to make sure that we, as a country, have policies to address the real concern that people have, even if they don’t always express them in the most constructive ways. Hopefully our history will be a guide to our future, as we’ve generally done a good job as a nation avoiding extremes politically.”

“The average American is tired of being promised things that don’t happen,” Herzka added. “They’re living on a salary and finding that they can’t afford anything anymore, and they’re getting frustrated.”

“This was a particularly interesting discussion by two key and highly respected professionals in the industry, who offer unique perspectives from their different businesses,” Kaiser said. “They are in tune to what’s happening in the marketplace and where we’re likely going.”

The Real Estate Principals Group was formed in 2011 by EisnerAmper director Harry Dublinsky and Moerdler to provide a collegial forum for the discussion of key matters impacting the real estate industry. The event was co-sponsored by Mintz Levin, EisnerAmper, and Riverside Abstract.

Another solid year of office leasing for in demand New York