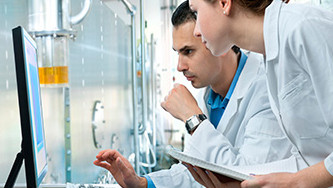 After Amazon’s breakup with Long Island City, a life sciences center may be the rebound the neighborhood needs to get back on its feet.

With a void where Amazon was to build its more than four million s/f HQ2 campus with 25,000 jobs and $30 billion in tax revenue, the industry is wondering what Long Island City’s future will be.

According to James Sullivan, managing director and REIT analyst at BTIG, there’s a lot of possibility for a life sciences center.

“Long Island City clearly has an interesting future, assuming Amazon doesn’t renegotiate to go back in,” Sullivan said. “Long Island City will do fine over time as a center for life sciences.”

Sullivan pointed to a recent $75 million deal that Alexandria Real Estate Equities, a California-based REIT focused on the life sciences sector, closed at The Bindery building at 30-02 48th Avenue in Long Island City.

The owner of the Alexandria Center for Life Science on Manhattan’s East Side also purchased Pfizer’s headquarters at 219 East 42nd Street for $360 million. “Alexandria going there is an affirmation that this makes sense,” Sullivan said about LIC. “Their deciding to go to Long Island City is a vote of confidence in the potential growth of life sciences in Long Island City.”

Lee & Associate’s principal Kenneth Salzman said growth of the life sciences sector in LIC was the initial plan before Amazon came on the scene.

“The New York community is certainly disappointed in Amazon’s decision, however it doesn’t change the fundamentals about why LIC is fantastic,” Salzman said.

“Both the life sciences community and the biotech industry as well as other businesses will fill the void over time that Amazon is walking away from.”

In comparing a life sciences hub to HQ2, Salzman said that the life sciences industry would take a while to develop and establish deep roots to hit Amazon-like numbers, but it would provide a lot of growth for LIC.
Besides Alexandria’s investment, King Street properties, a biotech property owner based in Boston, has teamed up with GFP Real Estate to build a $240 million biotech center in LIC.

The city is trying to push its life sciences industry with LifeSci NYC, a 10-year, $500 million investment to boost the presence here.

The report added that developing 1.5 million s/f of life science facilities in LIC by 2028 would generate more than 5,500 short-term jobs, nearly 15,000 permanent jobs and more than $7 billion in annual citywide economic output.

“I have been reminding people, even when we thought Amazon was coming, that life sciences would’ve been an enormous story,” Elizabeth Lusskin, LICP’s president said.

“All those core characteristics that made it attractive for life sciences are still there and nothing’s changed on our front.”

LIC’s proximity to the many medical and research intuitions on Manhattan’s East Side make it an attractive option, on top of the access to more space to build in Queens, Lusskin explained.

Lusskin said they’ve also received numerous calls following Amazon’s announcement to back out of LIC, including from those involved in the life sciences sector.

“One has to ask if the Amazon decision to not go to Long Island City is not reversible, does that create some nice opportunities for Alexandria to now expand there?” Sullivan
said.