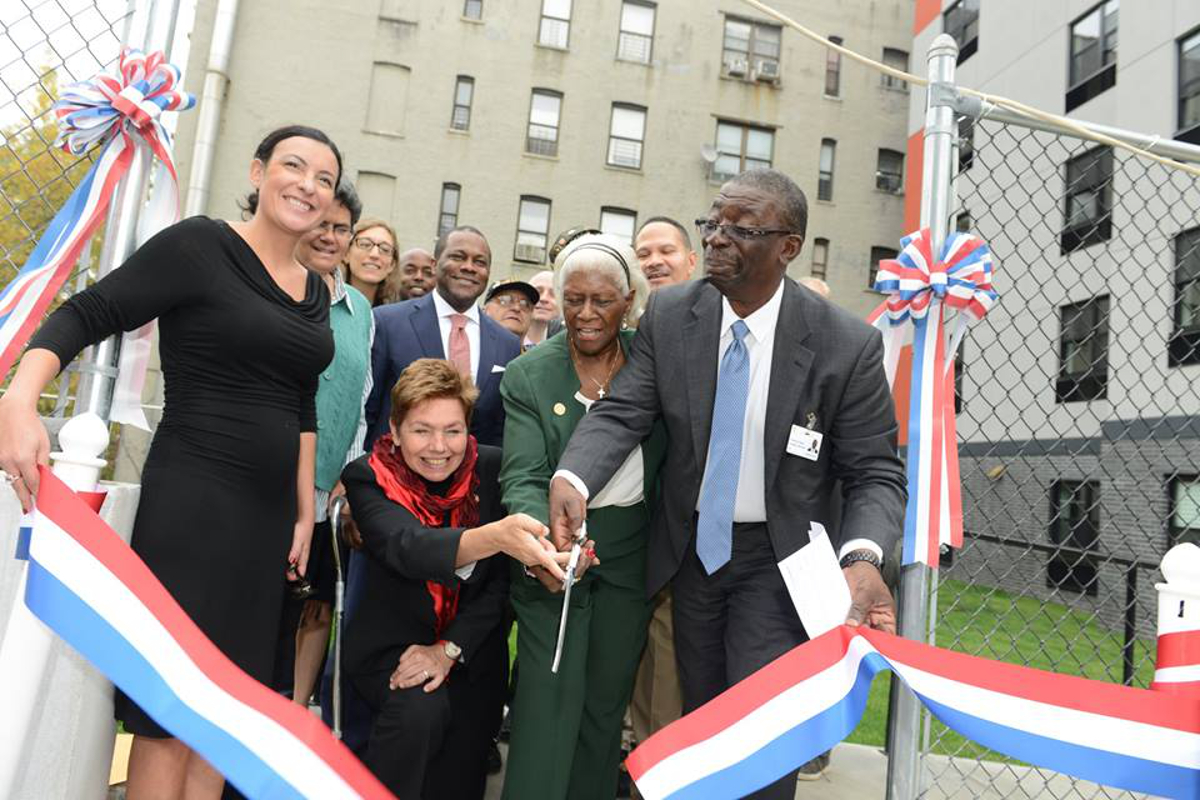 Life-changing moment for veterans in the Bronx

On a dreary Thursday morning last week, Ron Abad and the staff at Urban Pathways, as well as members of the community and media, attended a ribbon-cutting ceremony for a new 43-unit building in the South Bronx that will exclusively house homeless veterans.

But the drizzly weather couldn’t dampen the spirit of the day, which marked a big win for homeless advocates and crucial housing for veterans struggling with homelessness.

The units are badly needed: there are an estimated 1,000 homeless veterans of war in New York City, according to Mayor de Blasio’s office. But the numbers may be even higher.  “The harder part is that so many (veterans) are unidentified,” said Abad, who is the COO of Urban Pathways. “They often come as is, with no documentation.”

Abad, who previously worked at the Department of Homeless Services (DHS), said many people came to the agency and said they had served in Vietnam, Korea, or Iraq — but had no documentation and no surviving family members.

“Historically, vets have been on the streets struggling with mental illness, trauma, substance abuse – and with the added real estate struggle that everyone feels in New York City,” said Abad.

Urban Pathways partnered with Housing and Preservation Department (HPD), Deutsche Bank, Robin Hood and Enterprise on the Boston Road Veterans’ Residence, which had been under construction for the past two years.

The seven-story Boston Road apartments will house chronically homeless and low-income veterans, who are now in the process of applying to live in one of the units.

The apartments are permanent housing, meaning they’ll be on a lease. Subsidies cut the monthly rent down to an average of less than $500.

“We are planning to start moving them in in the next week or so, and we hope to be fully rented up by the new year,” said Abad.

This isn’t the first building for Urban Pathways – the organization has a number of sites they have developed, all of which are for formerly homeless individuals. The agency hopes to create another 300 apartments or supportive housing units within the next two to three years.

The non-profit, which was created 40 years ago, sees hundreds of homeless people a day in their centers around the city, which include drop-in centers, street outreach programs, safe havens, and supportive housing. Urban Pathways provides a total of 580 units of transitional, extended stay, and permanent housing, and currently has 250 units under construction. The agency hopes to have 1,000 units of affordable and supportive housing by 2017.

“We’re a housing first model,” said Abad. “We stabilize someone through a housing perspective, then add the wraparound service – case manager, psychiatrist, linking them up to healthcare, therapy, substance abuse treatment.”

One of those buildings is the Clinton Street Apartments, an 80-unit building adjacent to the Boston Road Apartments.

Gloria Montez arrived at Clinton Street Apartments after living on the streets for months. The Bronx native was one of the first residents to move into the building, where she has been for nearly a year.

“It was a blessing in disguise,” she said. “When I heard about it, I thought it was just another application – filling out, waiting. But I was wrong. They took the initiative to help me fill it out, and I didn’t have to wait too long before I was accepted.”

She found out about the apartments through Manhattan District Attorney’s office, which referred her to Urban Pathways.

Montez served in the Air Force as a military police sergeant for six years in the late 70’s and early 80’s, as well as a year in the Army Reserves. She was stationed in Turkey, and as one of the few females serving, she felt unwelcomed in the foreign country.

“They weren’t used to that,” she said. “It was 1979, and I was military police. It was a challenge, it was a new experience for me, I’d never been away from home that long.” She was introduced to “bad habits,” and struggled with the everyday life of serving thousands of miles from home, in an unwelcome land. When she returned home to New York City after being honorably discharged, she struggled to find a job.

“I wasn’t the same person as when I entered,” she said. “I came out and had a few mental issues. The military gets rough.” Two years out of the Air Force, Montez’s mental and physical health began declining, and it wasn’t until years later that she finally received the help she needed.

Her first night in her brand-new home at Clinton Street, Montez didn’t have a TV or radio yet, but she did have her books, so she lay on her bed and read.

“Tears of joy,” she recalled about that night. “I finally had a roof over my head and my own place.”