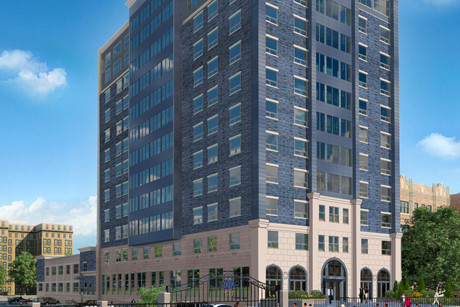 Lenders get on board with transit-oriented NJ development

Cushman & Wakefield announced it has completed $43.5 million in financing for a pair of two residential and mixed-use properties located at 141 and 315 South Harrison Street in East Orange, on behalf of the properties’ owner and borrower, Blackstone 360, a Newark, N.J.-based development firm headed by President and CEO S. Airaj Hasan.

“My team and I are very excited to be working with Amboy Bank towards the continued rejuvenation of East Orange,” said Hasan.

“At the very core, my aim is for these projects to continue to serve and benefit the community at large.”

Over the past five years, Blackstone 360 has developed over $60 million of mixed-use projects along the South Harrison Street corridor, creating a community of residential living that has been at the forefront in modernizing and rehabilitating East Orange.

“The residential market in general continues to be very strong,” said Gnad.

“Amboy Bank was very interested in starting a relationship with Blackstone 360, which, under Airaj Hasan’s leadership, is literally breathing new life into East Orange – and other urban centers – with these kinds of projects.

“The East Orange projects are also in a transit-oriented location, near the Brick Church New Jersey Transit Station,” he said.

“In general, lenders are very keen on getting involved with transit-oriented residential projects, the kind that continues to attract both the younger generation entering the workforce as well as empty-nesters.”