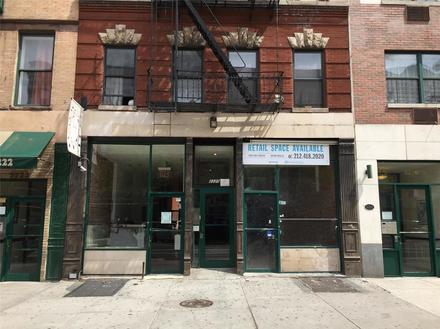 Faith Hope Consolo at Douglas Elliman has arranged a lease for Le Caméléon Restaurant at 2220 Frederick Douglass Boulevard, between 119th and 120th streets, in Harlem.

“Restaurant Row in Harlem is coming into its own, with the great mix of cafes and restaurants and cafés providing the amenities that people in the neighborhood want to see,” said Consolo, chairman of The Worldwide Retail Marketing, Leasing and Sales Team at Douglas Elliman.

Jeanne Mélanie Delcourt, the chef of Le Caméléon, is opening the restaurant with husband Xavier at her side.

A former chef at Camelia, the two Michelin star restaurant at the Mandarin Oriental in Paris, Delcourt was most recently chef at Palais de Tokyo, the Museum of Modern Art, near the Trocadero, in Paris.

Le Caméléon will offer a casual French menu, including fresh pastries in the morning and French-themed cocktails in the evening. The restaurant will be open for breakfast, lunch and dinner seven days a week, in addition to catering.

Arthur Maglio, a senior member of The Worldwide Retail Team, said: “We’re in touch now with many restaurateurs around the city who are aware of the vibrancy of Frederick Douglass Blvd. and contacting us as they consider bringing concepts uptown.”

The thriving culinary and hospitality scene has grown from the legendary Sylvia’s and Rao’s to now include the world-renowned Red Rooster, and is being today followed by The Cecil, Serafina, Mountain Bird, Chaiwali and a host of others.

Harlem’s first Whole Foods is also opening on the corner of Lenox Avenue and 125th Street later this year.