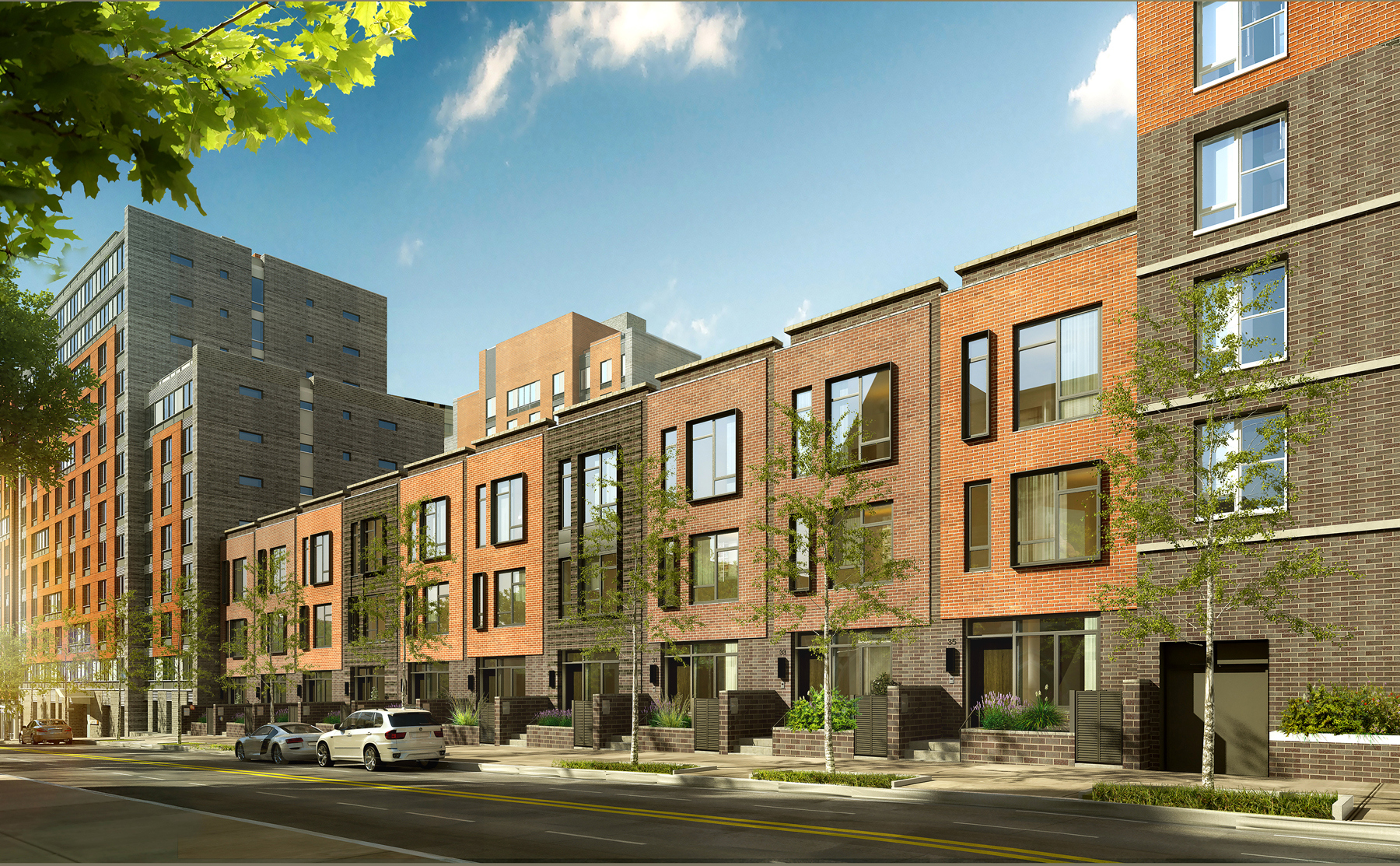 Last piece of puzzle coming together at Navy Green

In waterfront Brooklyn, a residential and retail development ten years in the making is finally nearing completion with a set of townhouses entering the market, marking the last phase of the mixed-use development that encompasses a full city block.

The Brooklyn Navy Yards, a former naval shipyard that manufactured warships for the Navy and at the height of its production employed 70,000 workers, has slowly been attracting retail, residential and commercial development in the past few years.

In 2006, the city held a competition to redevelop The Brig, a site adjacent to the Navy Yards that was formerly a naval prison.

Dunn Development emerged as the winner with their proposal and, after years of planning, designing, rezoning, and obtaining the right permits, the firm first broke ground in 2010.

Dunn formed a joint venture with L+M Development Partners and Pratt Area Community Council to build the project, which consists of 98 condos and 23 townhomes, designed by FXFowle Architects and Curtis + Ginsberg Architects, that circle a 30,000 s/f central lawn. “We liken it to a Gramercy Park — you have to have a key to get in,” said Christine Yoon, project manager at Navy Green, of the central green space.

The Condos at Navy Green, a 421a building, featured 74 affordable units and 24 market-rate, when they were listed several months ago, and have effectively sold out.

“They have basically flown off the shelves,” said Yoon. Those units started at $625,000 for market-rate and at $230,000 for affordable options. They range between one and three bedrooms. The building has a shared roof terrace, bike storage, a cold storage/package room, and access to the common green.

There are also three other completed buildings at the Navy Green complex that were the first to be built when the project broke ground in 2010; the 100-unit affordable building at 45 Clermont Avenue, completed in 2012, was the first, followed by two other affordable buildings, 40 Vanderbilt and 7 Clermont Avenue. The 6,000 s/f of retail at the site has not been announced as of yet.

“The excitement about the project is three things,” said Martin Dunn, president of Dunn Development. “The product is beautiful, the neighborhood is exciting to people, it’s very dynamic right now where things are changing and happening all the time, and the third is the price point.”

The Townhomes at Navy Green all have more than 3,000 s/f and three or four bedrooms, and start at $1.995 million, indeed a value buy compared to the average price of a Brooklyn townhouse in brownstone Brooklyn, which was $2.226 million as of the fourth quarter of 2015, according to a market report by Brown Harris Stevens.

All of the townhomes have either three bedrooms and a private terrace, or four bedrooms and no terrace.
Interiors feature custom white oak floors, laundry rooms, stoops, and private backyards with a gate leading to the 30,000 s/f landscaped central lawn, which is shared by all residents of the complex.

The homes were released in two phases, with the first phase including the 10 townhomes on Clermont Avenue, and the most recent phase, which listed the homes over this past holiday season, the remaining 13 homes along Vanderbilt Avenue. Halstead Property Development and Marketing is the brokerage firm in charge of sales.

Move-ins are expected to begin for the first phase of townhomes by late March.

“It’s been really great because most of the interest has come from young families, and we want people who want to stay in the neighborhood and help us create this community in an emerging neighborhood,” said Yoon.

A big boon to the neighborhood was the announcement that Wegman’s, a grocery store chain, will be opening a store in the Brooklyn Navy Yards, just around the corner from the Navy Green Development, a huge draw for the neighborhood, which not long ago, didn’t have much in the way of fresh food.

Along with Wegman’s, new restaurants and retail have been popping up nearby, including Oaxaca Taco, Brooklyn Roasting Company’s outpost on Flushing Avenue and a Mast Brothers Chocolate production facility on Washington Avenue.

“All of these things were not in place in 2006, it was sort of ‘if you build it they will come,’ and some was just about needing residential there. Now it will be over 400 units to a manufacturing area, and I hope it helps bring local businesses here.”

The Brooklyn Navy Yard’s commercial and industrial development has a lot lined up, including Building 77 on Flushing Avenue, which just revealed that its anchor ground-floor tenant will be iconic Manhattan eatery Russ & Daughters, which will occupy 14,000 s/f. The 16-story will have 1 million s/f once completed. That building, along with two other planned buildings, has attracted so many businesses, the waiting list to get space is reportedly more than a year long.

One of the major deterrents of the neighborhood has always been the lack of a close subway train stop. Though buses serve the area, the closest train station is a 20 minute walk.

However, bike lanes have flourished in the area, and just recently, the announcement of the proposed Brooklyn Queens Connector trolley by Mayor de Blasio mapped the transit line as running directly in front of Navy Green, a move that could add crucial transit to the neighborhood.

“The Navy Yard is blowing up essentially,” said Yoon. “Our perspective was always to create what we could on this block, and now the neighborhood as a whole is opening up significantly.”