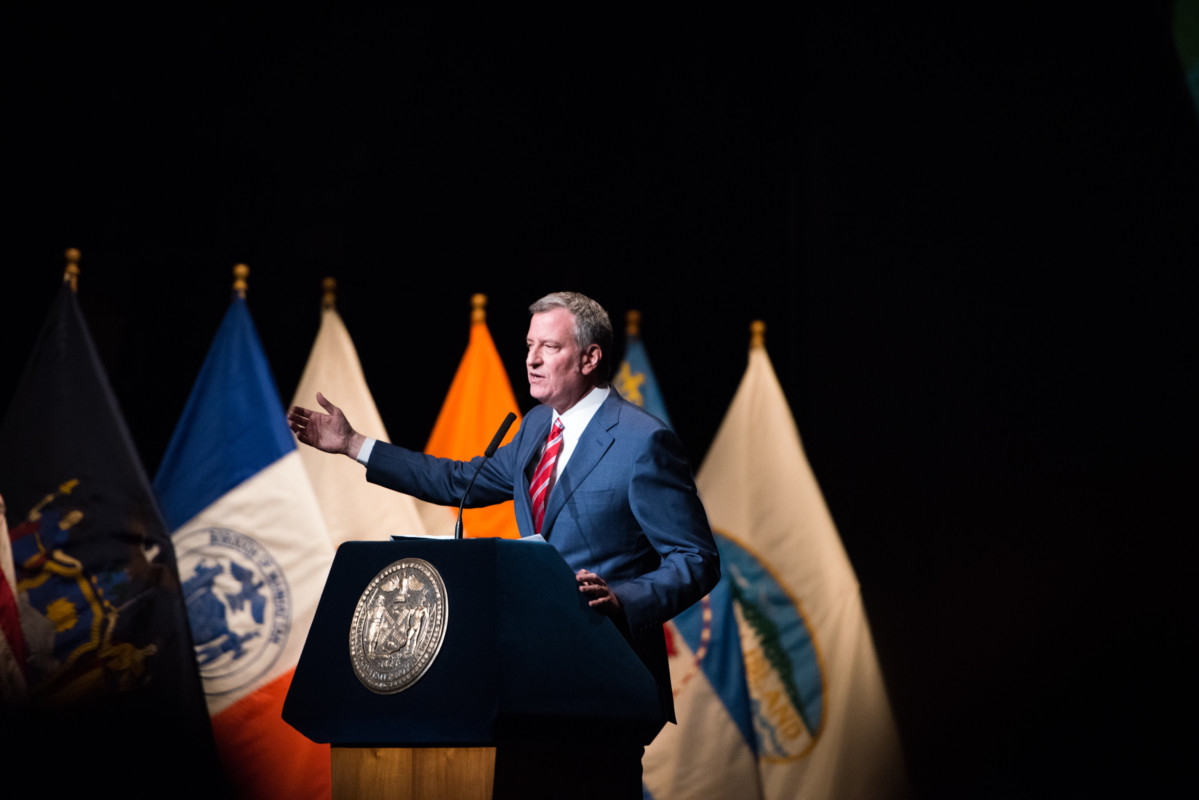 The real estate industry rounded on Mayor Bill de Blasio after a State of the City speech that included plans for a new mansion tax and legal aid for tenants facing eviction.

“We think this is a good concept and a positive step forward, but unfortunately it will serve only to delay the inevitable since the majority of eviction cases involve tenants’ inability to pay rent,ˮ said Joe Strasburg, president of the Rent Stabilization Association of the proposal to guarantee low-income residents facing eviction legal representation.

“This will create a cash crisis among small building owners that will result in their own inability to pay heating oil and repair bills, and the property taxes and water rates that de Blasio keeps raising,” Strasburg added.

In the last three years, the de Blasio administration has increased financing for tenant legal services from $6.4 million in 2013 to $62 million last year.

The effects showed — last year, evictions in New York City dropped 18 percent from 2015, and fell to their lowest level in a decade. De Blasio said in his address that there was a 24 percent decrease in evictions in 2016, and the city is committed to passing legislation guaranteeing a right to counsel for those facing eviction.

De Blasio added that his administration’s affordable housing plan, which has a goal of creating and/or preserving 200,000 apartments, is ahead of schedule, with 62,000 homes already built, financed, or preserved in three years.

However, Strasburg lambasted the Mayor saying, the legal aid proposal “places the burden of rectifying de Blasio’s miserable failure to address the homeless crisis squarely on the shoulders of the largest providers of affordable housing – landlords of one million rent-stabilized apartments in the five boroughs.”

Strasburg suggested the mayor support two proposed bills in Albany that he said would provide “immediate, effective and permanent solutions to the homeless crisis.ˮ

State Assemblyman Andrew Hevesi’s Home Stability Support program would supplement the rents of public assistance-eligible tenants facing homelessness or eviction, while a State Senate bill – Tenant Rent Increase Exemption – would permanently freeze the rents of tenants with annual incomes of up to $50,000 who pay half of that income toward their rent.

“New York City has one of the highest transaction tax costs in the country. An additional tax like the one proposed will suppress sales activity and lead to lower tax revenue for the city,” said Banks.

The state enacted a mansion tax in late 1980’s that currently imposes a one percent tax for homes valued at $1 million or more. The fee, usually paid by the purchaser, is usually around $10,000.
If the new mansion tax passes, buyers of homes that exceed $2 million will pay a 2.5 percent tax, increasing the tax to $50,000.

The Office of Management and Budget projected that in the next year, 4,500 homes worth $2 million or more will be sold, with an expected tax windfall of $336 million, which the city will allocated to affordable housing projects.

“We use that money to provide affordable housing for 25,000 senior citizens in New York City,” said de Blasio during his address, calling the tax something that will “right the wrongs of the past.”
Real estate executive and mayoral candidate Paul Massey, called the state of the city speech a “public spectacle.”

“It was indeed ‘Showtime at the Apollo’ last night,” said Massey.