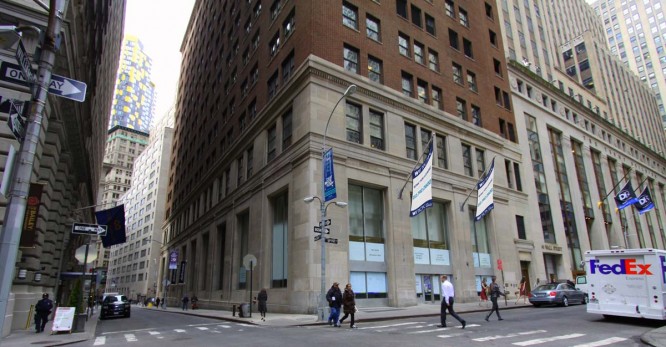 A trailblazer in the field of modern brand building, Joan Creative was founded in 2016 by Lisa Clunie, who had been the Chief Operating Officer of Refinery29, and Jaime Robinson, who served as the co-Executive Creative Director of Wieden+Kennedy’s New York office.

Relocating from 443 Park Avenue South in the fourth quarter of 2018, the agency will occupy a portion of the tenth floor of 44 Wall.

“When seeking Joan Creative’s next home, we wanted an environment that would match our adventurous spirit, foster collaboration, and inspire our team to think boldly,” said Clunie.
“44 Wall’s vivid design and exceptional location in the heart of a vibrant creative community proved to be the perfect fit.”

Equity Office is in the final stages of a modernization program to reposition the historic building as a premium office destination.

Improvements at the 350,000 s/f tower include the construction of multiple pre-built floors designed with a cutting-edge vibe and high-end finishes, and a revitalized lobby featuring artwork by New York City street artist Hellbent, which landed the tower on the Architectural Digest list of “The 12 New York City Office Buildings with the Most Incredible Artwork.”

“Lower Manhattan has been transformed into the preferred location for the city’s most innovative media brands, and the new 44 Wall is at the epicenter,” said Scott Silverstein of Equity Office.

“We are excited to welcome Joan Creative to a growing roster of tenants drawn to 44 Wall’s bold aesthetic and contemporary environment.”

Since acquiring 44 Wall in June 2016 and embarking on the building’s improvement program, Equity Office has attracted a number of creative and technology companies to the tower, including GameChanger, a tech company that produces a digital scorekeeping app; JobDiva, a recruiting software company; and Funny Or Die, the comedy brand founded by Will Ferrell, Adam Kay, and Chris Henchy.
Joan Creative was represented in the transaction by C.J. Heitner and Howard Hersch of JLL. Equity Office was represented in-house by Zachary Freeman and Scott Silverstein, as well as by Adam Foster, Michael Rizzo, Zachary Price, and Caroline Merck of CBRE.