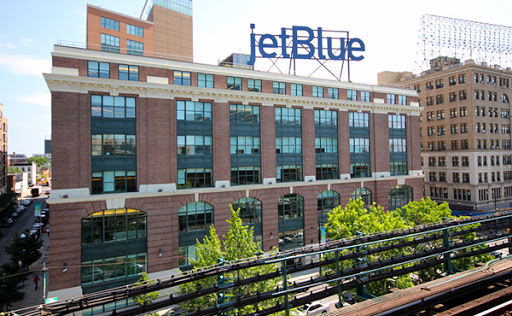 JetBlue today announced plans to double down on its commitment to New York by maintaining its headquarters in the city and advancing plans to expand its flagship terminal at John F. Kennedy International Airport (JFK).

After a competitive bid process, JetBlue said it will keep its headquarters in the Brewster Building at 27-01 Queens Plaza North in Long Island City (pictured top) when its current office lease expires in 2023.

JetBlue intends to negotiate and execute a lease over the next few months and then re-design its office space to be responsive to evolving workplace trends that have accelerated during the pandemic.

The Brewster Building was built in 1911 and is where the Brewster Aeronautical Company manufactured the Brewster F2A the first monoplane fighter airplane used by the U.S. Navy in World War II.

“New York is in JetBlue’s DNA and inspires everything we do,” said Robin Hayes, chief executive officer, JetBlue. “Our comprehensive review found that keeping our headquarters in the city was the right thing for our crewmembers, our brand, and our business.

“We’re confident in the city’s commitment to bring back NYC stronger than ever on multiple fronts, including public safety, economic recovery, and travel and tourism. And at JetBlue we’re ready to do our part as well by advancing sustainability and diversity initiatives in the city, partnering with local organizations across the region, and activating thousands of crewmembers to volunteer in our communities.”

“Today’s announcements from JetBlue affirm New York’s continued recovery from the darkest days of the pandemic,” said United States Senate Majority Leader Charles E. Schumer. “Thousands of new jobs connected to JetBlue’s growing presence at JFK, paired with the company re-affirming its commitment to being NYC’s hometown airline are great news. During the pandemic, I shepherded unprecedented relief to the aviation sector that saved hundreds of thousands of jobs and the entire airline industry. I am encouraged that having survived the worst of it, JetBlue is adding jobs, reinvesting, and recommitting to New York.”

“JetBlue is a true-blue New York company, proudly serving as our hometown airline for more than 20 years and actively promoting travel to all corners of the Empire State,” said Gov. Andrew M. Cuomo, New York. “The company’s commitment to keep its headquarters in Long Island City, Queens and invest in a new, modern Terminal 6 at JFK International Airport is a testament to New York’s position as a global leader in business and travel, and the state’s positive outlook for a post-pandemic economic recovery. New York and JetBlue have enjoyed a productive partnership – one that we intend to continue – and with the construction of Terminal 6, we look forward to welcoming even more visitors, travelers and residents alike to explore all our state has to offer.”

“I’m proud of New York’s Hometown Airline for keeping their team in the greatest city in the world,” said Mayor Bill de Blasio, New York City. “New York City is building a recovery for all of us, and that means keeping iconic companies like JetBlue here at home. We’re excited to keep them around and we look forward to years of collaboration to come.”

David Brause, president of Brause Realty and chairman of the Long Island City Business Improvement District said, “The Brause family is proud and excited to sign this long-term lease with JetBlue to keep New York’s Hometown Airline in New York. Our building, built in 1911 for the Brewster Carriage Company, has always had a rich history for transportation companies. In creating a home in the heart of Long Island City, JetBlue has reaffirmed that LIC is not only the geographic center of NYC, but also the heart of NYC. Given the incredibly challenging year we have all experienced, JetBlue’s decision to commit to LIC is not just a real estate transaction, but proof that companies still need office space in vibrant neighborhoods with access to the best and brightest people.”

In addition to its corporate presence, the airline continues to further plans to bring more air service to New Yorkers across the region’s three airports. Its flagship Terminal 5 at JFK has been celebrated for its customer-friendly design and facilities, and Governor Cuomo today announced that the Port Authority of New York and New Jersey (PANYNJ) will approve plans to develop a world-class terminal on the Terminals 6 and 7 sites.

The new Terminal 6 project will integrate with Terminal 5, building on JetBlue’s customer experience while expanding the airline’s footprint farther into the north side of the airport. It helps secure JetBlue’s long-term future at JFK with opportunities for new gates starting in 2025, and offers partner airlines the ability to co-locate with JetBlue to improve connectivity for customers.

The Terminal 6 project will be developed and operated by JFK Millennium Partners (JMP), a private consortium comprised of JetBlue; Vantage Airport Group, an industry leading investor, developer and manager of award-winning global airport projects, including as a member of the consortium that built LaGuardia Airport’s new Terminal B; American Triple I (ATI), a 100% minority- and woman-owned investor, owner, developer, and manager of infrastructure assets and infrastructure focused companies that seek to spur economic growth and development in markets across the U.S.; and RXR Realty, a leading New York-based real estate operating and development company.

The $3.9 billion, 1.2 million square foot terminal is set to replace aging existing facilities, and will be designed to accommodate both wide-body gates and narrow-body gates, as well as bright and airy check-in halls and arrival spaces designed to enhance the customer experience. Customers will enjoy more than 100,000 square feet of commercial dining and retail amenities, lounges, and recreational spaces. The new terminal will also include critical infrastructure improvements to the airport’s roadways, optimizing traffic flow and transportation access at the airport, and incorporate the latest advances in both sustainability and security.

According to the Port Authority of New York and New Jersey, the development of Terminal 6 is expected to result in over 4,000 direct jobs (both on-site and off-site) and direct payroll wages of $1.9 billion. The total economic activity impact from the project amounts to nearly $2.8 billion in total wages and $6.3 billion in total economic activity.

JetBlue will also expand its footprint at LaGuardia Airport beyond its current space at the historic Marine Air Terminal and partially move into the airport’s recently opened and state-of-the-art Terminal B later this year with plans to move completely in 2022. At Newark, JetBlue will also move, relocating to the new Terminal A in 2022.

JetBlue plans to add more than 1,800 jobs at New York City airports thanks to new flights and destinations it is adding as a result of its Northeast Alliance with American Airlines.