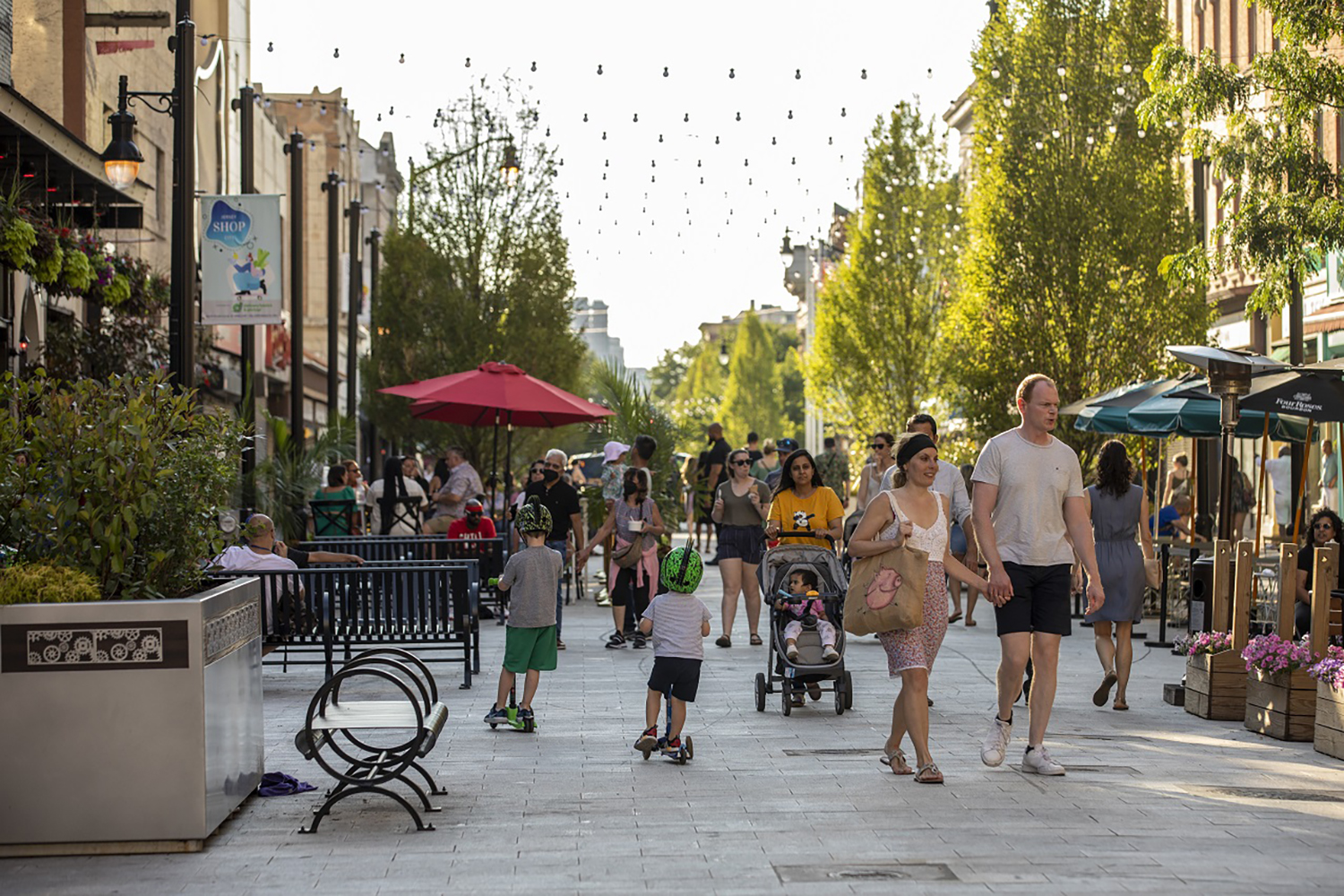 Mayor Steven M. Fulop joins the Department of Infrastructure and the Division of Engineering to accept the award for Municipal Project of the Year from the New Jersey Society of Municipal Engineers (NJSME) after completing the final piece of the Newark Avenue Pedestrian Plaza construction.

The transformation gives “restaurant row” the permanency it deserves, creating one of New Jersey’s premier destinations for shopping, dining, and community events. The City held multiple community meetings to garner public input and incorporate feedback throughout the design.

“After careful consideration, in 2015, we took a chance to establish a safe space for pedestrians where we could foster community and stimulate our local economy. To receive this award from the state-level seven years later further confirms that our vision has become a reality and a major success,” said Mayor Fulop. “This plaza permanency project included more tree plantings, ADA accessibility, built-in seating, bicycle racks, better lighting for improved visibility, and steel bollards near active portions of the roadway to ensure the safety of pedestrians as part of Jersey City’s commitment to Vision Zero.”

“This was a significant undertaking because we really wanted to make sure we met all the community’s needs and wants within the design, especially for our local businesses who stand to benefit in a major way from the permanency project. We also did not want to disrupt the active area during construction. After years of creating a place where residents and visitors know they can go year-round to enjoy the outdoors, the restaurants, the shops, and the overall ambiance, we are very proud to have delivered on this special project and to take home an award in the process is an added bonus I am grateful for,” added Paul Russo, Director of the Division of Engineering.

The existing roadway is now raised to meet the new trench drainage system, which also provides curb-less ADA accessibility to the plaza. Hydronic excavation was used for the footings of the decorative poles, which support the programmable LED string lights that illuminate the plaza, leaving a distinct and welcoming impression on customers and passive users.

The Pedestrian Mall was first closed to vehicles in 2015 as a pilot program to limit traffic and create a pedestrian destination. The plaza was expanded to a second block in 2018. During the COVID-19 pandemic, the plaza was lengthened to Grove Street between Montgomery Street and Christopher Columbus Drive, as well as 1st Street and Newark Avenue. The expanded outdoor capacity helped restaurants and small businesses stay afloat and safely reopen sooner.

“In a densely populated City like ours, pedestrian plazas and open spaces are critical public infrastructure to support not only economic vitality but also the overall health, well-being, and resilience of our communities,” said Barkha Patel, Director of the Department of Infrastructure.  “Following the success of the Newark Avenue Pedestrian Plaza, we have since added several other pedestrian plazas in other areas throughout Jersey City to help our local restaurants and small businesses survive, especially during COVID, with expanded outdoor space to entice more people to shop local.”

Presented at this year’s New Jersey League of Municipalities in Atlantic City, the award for Municipal Project of the Year was accepted by Jersey City’s Engineering team after years of careful planning to create a unique design that meets the community’s needs.

“On behalf of the Society, we commend Paul Russo, PE, on his outstanding work on the Newark Avenue Pedestrian Project and his first place honor. The administration’s innovation has created a transformation of the area, which now allows for the community to enjoy more open space, offers ADA accessibility and pedestrian safety, all while delivering an aesthetically pleasing plaza to the City,” said Matthew Halpin, NJSME Executive Director said of Jersey City’s efforts.

In Jersey City, 2022 is the “Year of Open Space”, emphasizing the community’s need for open space and the opportunity to innovate and create them.