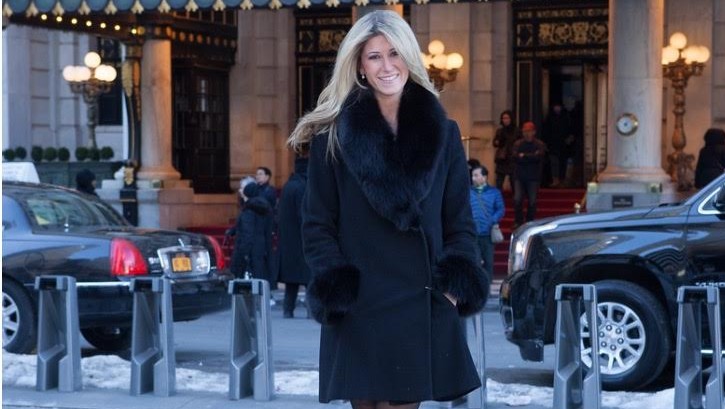 With long blonde hair and model good looks, Stefani Markowitz could have been anything she wanted to be.

Born in Manhattan and raised in Westchester, she grew up in a happy home filled with a bunch of kids, each encouraged to reach for their own star.

Medicine was a mainstay in the house. Mom Hillary is a nurse and sister Jackie is a child life specialist, so it wasn’t really a surprise when an energetic 18-year-old Markowitz headed off to the University of Michigan to study Kinesiology, the scientific field of human movement.

Her interest in medicine, though, was overshadowed by a passion for real estate and an innate desire to learn all she could about the business. Throughout school, she interned at brokerage firms and immediately began working as a licensed broker in Manhattan when she graduated, with honors, in 2009.

Friedman had been best friends and army buddies with Larry Krug, the founder of the powerhouse Florida real estate brokerage, for five decades. The pair had partnered on a plethora of lucrative real estate and Wall Street deals over the years and, in appreciation, Krug offered Friedman the rights to the Rutenberg name in New York.

As Markowitz tells it, her grandfather knew a successful business model when he saw one.

Common in Florida, where the firm began, a 100 percent commission brokerage model was relatively new to Manhattan. New technology and access to listings was changing that, however.

“My grandfather really understood the formula for success,” said Markowitz. “He knew that a real estate firm offering 100 percent commission to its agents was the way of the future. Instead of having to split commissions on a 50/50 basis with a brokerage firm and pay high costs for desk and administrative fees, Rutenberg agents are able to keep 100 percent of their commissions.”

At Rutenberg, residential brokers pay a fixed fee of $99 month and closing costs of no more than $2,000 (applied to sales over $1.5 million.) On any commercial transaction, agents keep 90 percent of the commission.

Friedman launched Charles Rutenberg in 2007 with Joe Moshe — a trustee of the Krug family who was operating the franchise on Long Island — and brought in former Douglas Elliman executives Kathy Braddock, Paul Purcell, and his then son-in-law, Jeffrey Markowitz (Stefani’s father).

His bet proved to be a good one, and the firm quickly attracted agents who were riding the real estate boom along with everybody else — and pocketing 100 percent of their commission.

The money poured in, just as Friedman had predicted, but with it came a series of lawsuits over partnership agreements at the firm.
The disputes were ultimately settled, with Braddock, Purcell and Jeff Markowitz each leaving the firm. Richie Friedman maintained ownership and Moshe continued as a partner, but focused on the Long Island market.

The legal woes and a recession had done little to elevate the firm from its promising early start. But Grandpa Friedman, it seems, had a secret weapon up his sleeve in the form of his blonde granddaughter with the model good looks.

With eight years of high pressure brokerage already under her belt, Friedman believed Stefani was the catalyst required for taking Rutenberg into the market of the millennial.

Stefani Markowitz was appointed president of Rutenberg NYC in 2014 at the age of just 27. She had spent her post college years working at the feet of revered New York brokers Doug Heddings and Adam Modlin.

“My grandfather’s reputation is one of honesty and integrity in Wall Street for over 50 years. No IPO (Initial Public Offering) went public without my grandfather setting the market. I sat by his side as he read through hundreds of prospectuses and real estate ventures,” recalled Markowitz.

“When he had been contemplating bringing the business model of Rutenberg to NYC, he turned to me and said ‘I see Rutenberg being the greatest company that I’ve ever been involved with. Go learn all you can about this industry, the intricacies of brokerage, research the market and pay close attention to every detail. After you become an experienced broker and have great market knowledge, I want you to take Rutenberg to the top’.

“I knew the way to grow in this business was by choosing great mentors. Doug Heddings and Adam Modlin showed me what it takes to be a successful real estate broker in this city. I learned the thrill of closing the deal and the importance of relationships. They taught me that every client is your most important client and every agent is your next potential business partner.”

Markowitz believes her grandfather recognized his own qualities in her. “I think he saw a lot of me in himself,” she said. “The way I value each and every real estate property is the same way he valued each and every company he priced.”

While that could sound like some PR hyperbole, over a recent lunch at a restaurant near the company’s midtown office, Markowitz displayed a passion for both the business and the people that is hard to disregard.

She said she doesn’t “see dollar signs” as she goes about her business, yet is acutely aware of the trajectory of her firm.

In the year since she became president, Rutenberg has grown by 20 percent, from 489 to 620 agents, and is the sixth largest company in New York City, by number of agents. Ranked by number of listings, it moved up from 11th to 9th in the city, according to The Real Deal, and sold nearly $97 million worth of real estate, an increase of five percent on the previous year.

While undoubtedly proud of her bottom line, Markowitz said it’s the people she works with who drive her every day to do better.

She has personally interviewed every single agent who has joined the firm. “Hearing their stories is probably my favorite part of Rutenberg,” she said.

“Each agent and his or her story is important to me. Watching them through a complete transaction and being able to give them their check the same day while keeping virtually 100 percent of the commission, is incredibly rewarding.

“When an agent tells me they are able to pay an expensive medical bill, spend more time with their child as a single parent, or take the vacation they’ve always dreamed about, that is what brings me joy at this job. I love checking the sales report at the end of each month and seeing how much money the agents took home.”

Markowitz has made astute investments in her agents in the form of professional development programs, networking and community based initiatives.

She partnered with the Wounded Warriors project to train veterans in the art of brokerage and, last September, hired Bronx-born former submariner Derrick Torres as the first agent to pass the training program.

She implemented a concierge service, which includes everything from expertly prepared board packages to newsletters, show sheets, announcement cards and mailings.

A new learning center has been opened for agents who are working on — or would like to work on — complicated transactions such as foreign purchasers, working with corporations, or intricate legal issues.

Industry stalwarts Esther Muller and Faith Hope Consolo were recruited to run seminars every week. The two veterans of the business also provide free one-on-one coaching sessions for agents and have drawn on their own legendary dealmaking prowess to bring guest speakers in the fields of branding, technology and real estate.

The Academy of Continuing Education leader believes Markowitz’ maturity level and professionalism far surpass her age.
“I especially respect her values of family, friends and colleagues. Her work ethics are key to her success and I believe she truly represents the new generation of real estate professional,ˮ said Muller.

Consolo calls Markowitz “a leader by example.” The Douglas Elliman Retail Sales & Leasing chairman said, “Since taking over the company, Stefani has attracted some of the best and the brightest agents in the industry and demonstrated a ‘take charge, lead the troopsʼ style that promotes team effort.

“And she’s not a figurehead, but a roll-up-your-sleeves-and-work-hard leader who does her own deals while running the company — not from her armchair, but from her head and her heart.

“She is quick on her feet, has brains and beauty — what more could you ask for in a leader?ˮ

Markowitz said her firm’s commission model is ideal for team building “since only a small transaction fee is taken off the top, there is more money left over to be divided among the team.” With that in mind, she started Team Tuesday at Rutenberg to let agents who want to join teams, or expand their current one, meet other agents and do so.

She added, “The consistency of education in an industry that is constantly changing is crucial. I am a big proponent of teams and truly believe the whole is greater than the sum of its parts.

“The interesting thing about our model is that we attract self-sufficient, experienced brokers. Mostly, these are agents who realize that their network is one they built themselves, and their success is due to their hard work and determination.

As she enters her second year at the helm, Markowitz said she has big plans to expand the company further, increasing the Rutenberg teams specializing in different sectors of the industry.

“I think, for the real estate market, 2015 is now the year to beat, so we’ll be focusing on helping our agents success and keeping all our clients happy.”

When he announced the appointment of his granddaughter as president of Rutenberg, Richie Friedman told Brokers Weekly, “We are excited about the fresh and innovative perspective that Stefani will bring to the firm as we pass the baton to a new generation. With Stefani’s blend of experience and youthful vigor, we are supremely confident that the firm will continue on its impressive growth trajectory and enjoy great success.”

While there is no doubt that her age and good looks might continue to raise eyebrows in the competitive world of New York real estate, Markowitz has already shown she has the chops to run a firm that bills itself as one for “smart brokers.”

At last month’s big Real Estate Board annual banquet, she was the epitome of professionalism and perception among the big league players who crowd the Hilton ballroom for what’s become known as The Liars ball.

She said later the event was an opportunity to say hello to familiar faces and meet new potential business partners. “It is great to be in a room with so many like-minded individuals who all share the similar interest of real estate. I was proud to support REBNY and celebrate its 120th anniversary.”

Pride will likely continue to drive her own success as she carries on her grandfather’s legacy.

She said, “His legacy is to have his granddaughter lead a real estate company the way he led his Wall Street firm, with professionalism, honesty, integrity and ambition.

“When I report to him at our weekly meetings about the company’s growth and record-breaking sales, it makes us both realize what a great team we are.”

And for the record, blonde hair is light in color because it lacks a pigment called eumelanin. Contrary to common folklore, there is no scientific evidence to support the stereotype of “dumb blonde” or the misconception that ‘blondes have more fun.”

Markowitz does concede, however, “I am having fun building this company to be one of the best the industry has seen. It’s hard work, but it’s definitely fun.”