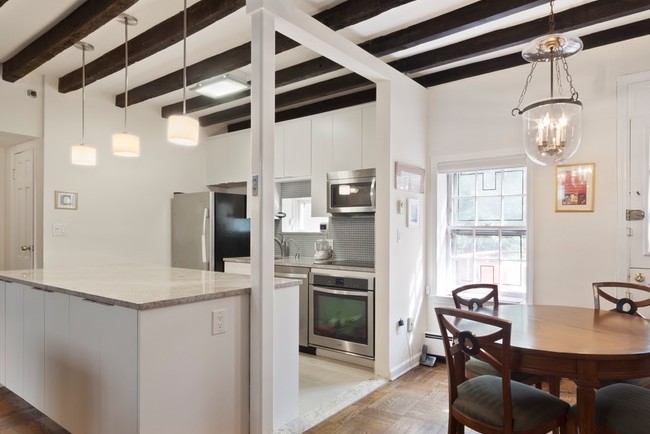 New York Times bestselling author Chuck Klosterman just sold his Boerum Hill condo for $1.325 million, according to property records.
The author, who also writes a featured column for Esquire, has written several books, including 2003’s Sex, Drugs and Cocoa Puffs.
He first listed the apartment at 88 Wyckoff Street in March of this year for $1.369 million. Klosterman and his wife first purchased the 1.5 bedroom condo in 2010 for $960,000.
The unit has a fireplace, open floor plan, and a shared roof deck.

The house used as Anne Hathaway’s character’s home in The Intern has hit the sales market.
20 Verandha Place in Cobble Hill is a landmarked pre-Civil War carriage house that has been converted to a double-duplex.
The property is spread over three floors with outdoor garden and deck areas.
Each duplex is 24 ft. wide and, collectively there are four bedrooms, four bathrooms and two working fireplaces. The ceilings are wood-beamed and there are etched-glass living room windows.
Listing agent Andrew Friedman at Halstead said it wouldn’t take much work to combine the two duplexes and create a unique single family home. He has listed the property at $4,950,000.

Mets’ star pitcher Noah Syndergaard AKA “Thor” is convalescing in his luxurious new two-bedroom apartment at Manhattan View at MiMA, the condominium designed by AD100 star Jamie Drake.
The apartment is over 1,200 s/f with floor-to-ceiling windows overlooking the New York City skyline including the Hudson River, Empire State Building and beyond.
It has high ceilings, an absolute must-have for Noah who clocks in at 6 ft. 7 ins.
There is an the open living room is filled with everything a man needs to recover at home – a big couch and even bigger flat screen TV.