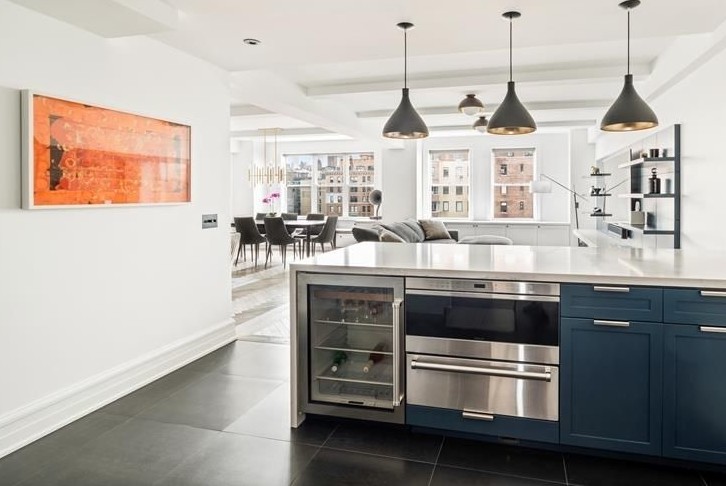 The four bedroom, 3-bath home (pictured top) has a corner master bedroom and open kitchen with custom Japanese cabinetry.
There is two-zone central air, audio and visual surveillance cameras and a built-in surround sound system.
Gans has listed the apartment at $5.4 million.
Dr. Goldstein is the founder and CEO of Bespoke Surgical, the first medical group to specialize in gay men’s sexual health and wellness.
An advocate for the LGBTQ community, he also writes for The Advocate and Gays With Kids.

Weichert, Realtors raised $172,000 during its 17th Annual Charity Golf Outing to benefit the American Cancer Society (ACS) and breast cancer research.
Proceeds from the event bring the grand total that Weichert has raised for the ACS and breast cancer research to $1.212 million since the annual fundraiser began in 2001.
Held annually at the Fiddler’s Elbow Country Club in Bedminster, NJ, the days awards were presented during an evening banquet hosted by TV and radio personality Bill Spadea as the emcee.
Spadea is the morning drive time host on New Jersey 101.5 who also happens to be a corporate vice president for education for Weichert.

CITY CONNECTIONS founder David Schlamm had an unexpected visitor in his backyard recently.

The veteran real estate boss snapped a brown bear strolling across his lawn in leafy Franklin Lakes, New Jersey..
“He or she simply stared at us for a second and then walked away,ˮ said Schlamm, a Long Island native who settled in Jersey with wife Jill and their two grown girls.
“It’s been years since I have seen one in my backyard and they are amazing to watch — if one is inside with the doors locked!ˮ