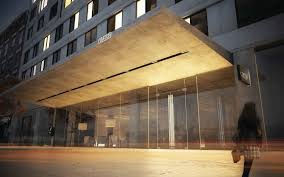 Have you heard… ‘Dexter’ penthouses on the market

A midtown Hotel is trying to sell its top three penthouses where a Saudi prince as well as Rihanna have stayed and where the TV series “Dexter” often filmed episodes.
Sebastian Lopera of Nest Seekers International has the exclusive listing for the top floor units at the Cassa Hotel and Residences at 70 West 45th Street, asking $25 million. Units are available individually, or as a package deal with the option to combine them. They can also be rented together for $70,000 a month.
The building, developed by Solly and Isaac Assa for Assa Properties, is known for its flexibility and short term rentals.
The available units with five bedrooms and 4.5 baths come fully furnished with one of the units being reminiscent of the “50 Shades of Grey” movie set. The buyer or renter will also get 24/7 room service from Butter, a restaurant in the building.

The only residence at The Plaza to have its own private elevator and personal staircase and landing is now available to rent for $46,000 per month.
The residence, Mansion 201, is 4,665 s/f and has four bedrooms and 4.5 baths. It features Central Park views from every window and those windows are soundproof.
Over the years, Plaza Residences have been home to names like F. Scott Fitzgerald, Tommy Hilfiger and Christian Dior.
Mansion 201 comes with with Armani/Casa and Poltrona Frau furniture and Bang & Olufsen audio-visual equipment. There’s also a custom eat-in kitchen with Nero Marquita stone countertops, a Mosaic Calacatta marble backsplash and Viking appliances. There’s also antique limed French oak herringbone and wide plank flooring. Chris Fry and Shea Mena of Elegran have the exclusive listing.

Ian Bruce Eichner’s Continuum Company has just sold a penthouse at Flatiron tower 45 East 22nd Street for nearly $25 million.
The condo duplex unit’s buyer was an LLC called Cloud City, according to sale records on Acris.
The home features over 6,000 s/f of space and has four bedrooms and 6.5 baths along with views of Madison Square Park.

Jersey City is the most diverse city in the country in 2020, a study by WalletHub has found.
According to the report, New York didn’t even make the top five, coming in at sixth behind Silver Spring, MD (fifth) and Spring Valley, NV (fourth). Germantown, MD, was number three and the second most diverse city is Gaithersburg, MD.
“Jersey City has always been a welcoming home and brings a diversity of cultures, religions, and languages together — truly embodying the promise of America,” said the city’s mayor, Steven Fulop, in an email to constituents, adding that immigration policies have “a great deal of impact” on the city.

Done deals: One in (under) a million