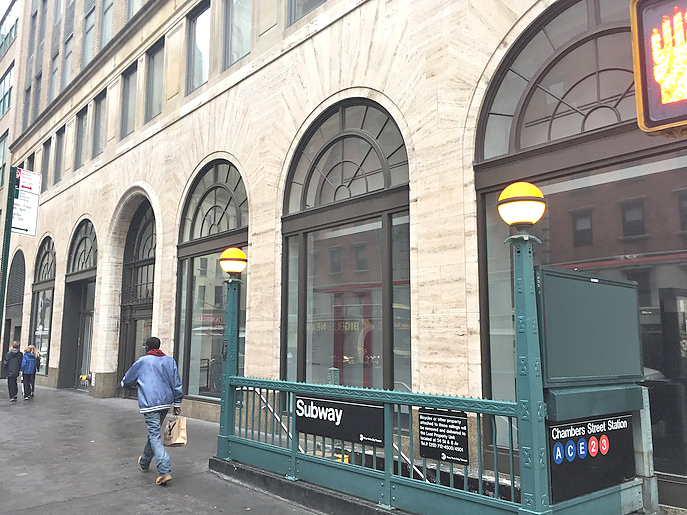 Fisher Brothers has bagged $11 million for a retail condo at 37 Warren just a few months after partner Winston Fisherʼs gym there shut up shop.

HUBB NYC, the firm previously known as Trevi Retail, bought the Tribeca retail condo – its second buy since the beginning of the year.

Cushman & Wakefield’s Will Suarez brokered the sale at the building, also known as 136 Church Street, to HUBB for $11.2 million.

Delivered vacant, Suarez said the space, between West Broadway and Church Street, has 2,847 s/f on the ground level and 1,364 s/f of lower level selling space. It has over 100 feet of frontage and arched, floor-to-ceiling windows.

The sale price equates to $3,934 per square foot, according to Suarez, who noted, “Demand for prime Lower Manhattan retail property has never been higher among both investors and tenants.”

The retail space was previously occupied by the boutique gym, Drill Fitness, which closed last November amid competition from web-based gym membership firms.

In an email to the Tribeca Citizen, founder Winston Fisher said the location was “not economically viable in today’s landscape.”

Fisher, 42, is a partner at Fisher Brothers, the New York-based family real estate company that converted the former office building into an 18-unit loft condo that sold out in April 2014.

Fisher is a dedicated Ironman triathlete who has raised thousands of dollars for Intrepid Fallen Heroes Fund over the years by biking across the country in the six-day Race Across America.

HUBB NYC Properties’ president, Johnny McCarthy, said the firm has already tapped RKF to “attract quality tenants to what we believe is one of the best available spaces in Tribeca.ˮ

McCarthy added, “We do like the neighborhood and the property a lot. But as evidenced by our recent acquisitions, we are really focused on actively acquiring more properties throughout all of Manhattan. In 2016, we would really like to focus on the overall expansion of our portfolio.”

In the past several months, HUBB has purchased a four-building residential portfolio on the Upper East Side, a move that prompted the company name change as it veered away from its retail focus.