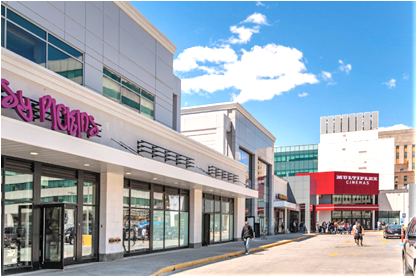 Modell’s, Kidstown, American Stenographic, and Rainbow Stores have leased space at Concourse Plaza as part of the rejuvenation of the 25-year-old Bronx mixed-use landmark, announced The Feil Organization, the complex’s owner and manager. Terms were not disclosed.

American Stenographic has leased 1,800 s/fof office space and Rainbow Stores has leased 7,585 s/f of retail space at the project, located at 200 East 161st Street, just off the Grand Concourse, the major north-south thoroughfare connecting the Bronx with Manhattan.

Feil recently completed an $18 million renovation of Concourse Plaza, which included a new façade, an overall update, and the renovation of the Food Bazaar supermarket anchor, one of the largest grocery stores in the Bronx.

The center is also anchored by a 10-plex National Amusements theater. Burger King and Popeye’s are also coming to Concourse Plaza, as previously announced.

“This center is part of the exciting Bronx revitalization,” said Randall Briskin, vice President of Leasing for The Feil Organization.

“The entire Grand Concourse area is being gentrified, so this was an opportune time for us to reinvest in Concourse Plaza. And that clearly is paying off as we add new retailers and services.”

Serving a population of over 1.2 million consumers within a three-mile radius, the 311,650 s/f Concourse Plaza is one of the premier shopping destinations in the borough, within walking distance of Yankee Stadium and adjacent to a 1,883-unit residential housing community, the Bronx County Courthouse, and Bronx Municipal Building.

Randall Briskin and Nicholas Forelli, also of Feil, represented Feil in the transactions. No outside brokers were used. Feil was advised by in-house counsel Brian Palumbo and Michele Frankel.