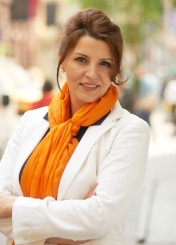 For Anjollie Fedarov, you have to get to know your client before sealing the deal.

Fedarov, a Rutenberg NYC broker, was born in Bulgaria and escaped the Communist country with her family in the 70s. They spent a short stint in Italy as refugees before eventually moving to Brooklyn when she was in the second grade.

Over the years, Fedarov picked up Bulgarian, Turkish, Italian, French and English and her multicultural background is now reflected in the large foreign-buyer base she has in Manhattan.

She worked in that industry for 20 years under big companies Merrill Lynch and Smith Barney, representing high-net-worth and international clients. But the financial crisis of 2008 upturned the industry and her world.

Forced to find another avenue to make money as a single mom raising her daughter, real estate crossed her path after she was helping a broker with her taxes. Fedarov said she was shocked at the lucrative income to be made.

“When I saw her income, I said, ‘How in the world did you make this money?’” Fedarov recalled of her first encounter with real estate. “So yes, because I’m a single mom, I’ve been raising my daughter since she was eight-years-old. She was finishing high school and getting into college and I paid through four years of school for her through my career.”

Fedarov’s real estate career started with smaller brokerages but she quickly realized there weren’t enough learning opportunities and the commission fee was too straining for a single mom.

Instead, she discovered Rutenberg NYC, which offered a 100 percent commission business model and whose executives were far more accessible than the other companies she’d worked for.

“In Rutenberg, everybody is so easily accessible,” Fedarov explained. “When you go into your office and you want your check, you get it within an hour. If you have a question, you get it answered right there. And you get free hugs, you get attention.”

Being at Rutenberg for eight years now, Fedarov has no plans to leave.

“I’ve been recruited by other firms, but I’m staying put because, like they say, ‘If it ain’t broke, don’t fix it,” Fedarov said. “[Other companies] tell me they have more resources, an international market arm, but at the end of the day it’s about the individual.”

Her approach is centered wholly on getting to know the client and what makes them tick, especially for her international clients. From Chinese, to Turkish, to Dutch, Fedarov understands that each of her clients is a different human being.
“For each one of these cultures, each has a different approach,” Fedarov said. “And most brokers don’t know that because they don’t travel enough. They’re in New York too much.”

She’s been able to secure some of her most memorable deals with foreign buyers through her personable approach. Her foreign buyer base has also extended her network as her satisfied clients often find her new deals from other potential international clients.

“You want to court them, spend some money on them, get to know them and ask why,” Fedarov said of her process. “If you focus a little more about getting to know your client, you’ll actually get to do a bigger sale.”

In one of her more recent deals, a Chinese family was looking for a place in Manhattan. Fedarov said the wife went through multiple brokers who insisted on looking at Upper East Side properties. However, Fedarov took the time necessary to build a relationship and spent a lot of time with her client to develop a better profile of what they needed.

“Her husband travels all the time and her son likes acting and music,” Fedaraov said. “If she’s by herself, why would she want to be all lonely on the Upper East Side.”

Instead, Fedarov took her around town at Lincoln Center, a neighborhood surrounded by museums, theatres and performance venues. She said the family bought the first property she showed them.

“If brokers would spend one hour really getting to know the client, it would save them so much more time and their success rate would shoot up to the ceiling,” Fedarov said. “Nobody takes the time because they’re intimidated by the money or afraid that if they ask too many questions, they’ll lose the client.”

In one instance, Fedarov said her client was a Middle Eastern prince looking for a place in Manhattan. While she eventually got him his new digs, their friendship included her making soup for him when he was sick and taking him to his first spin class at Equinox.

Her rapport-building extends past her clients when she wanders around town looking for more deals. With a particular property in mind, Fedarov said she would visit the building with coffee and chat with the doormen and supers.
“Because he’s the doorman, he knows everybody in the building,” Fedarov said. “He’ll make an introduction or he’ll tell me to come back at this hour to meet someone.”

Through her willingness to engage with people, she’s said she’s opened many more doors and gained a deeper understanding of different areas, demographics, and the properties themselves.

“I talk to bartenders, I talk to taxi drivers, I talk to everybody and their mothers, not out of force but because I take interest in people and their lives,” Fedarov said. “If you care, you can’t look at everyone as a dollar sign, but if you take interest, you’d be shocked at who knows who.”

With her recipe for success, Fedarov said any agent can make it in New York City. “These brokers don’t understand; they think it’s such a competitive market,” Fedarov said. “I say, ‘Stop thinking about everybody else, just think of you, think of the people you meet every day and pretend you’re the only agent in Manhattan.’”