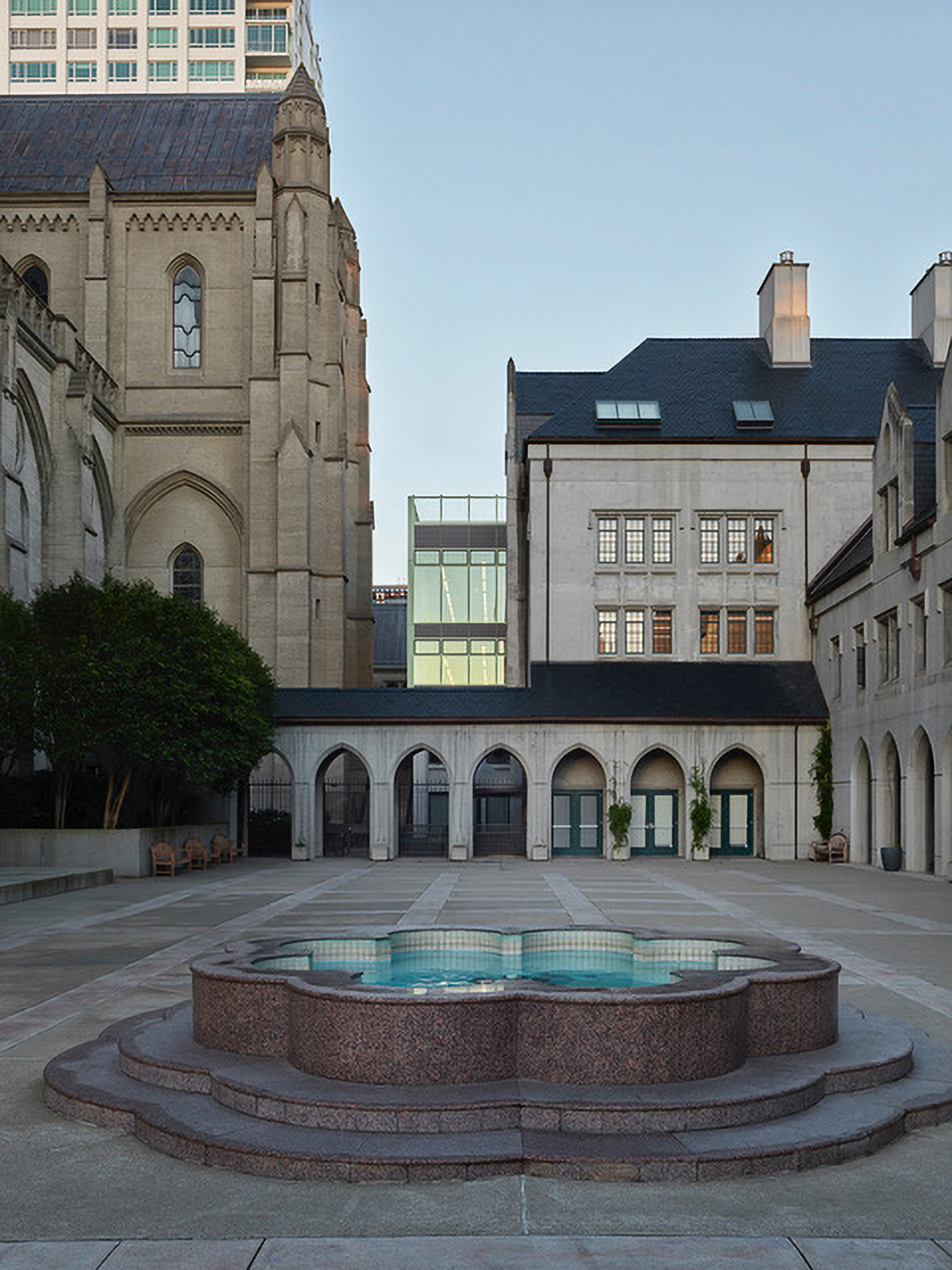 In a successful, sustainable addition and classroom reorganization for a leading Bay Area independent school, the Office of Charles F. Bloszies FAIA has completed a strategic expansion recently unveiled by the Cathedral School for Boys in San Francisco.
The 12,000-square-foot addition and renovation, designed by the architecture and structural design firm, adds a new modern element and creates valuable new spaces indoors and outdoors while reorganizing much of the school’s interior program. Key capital improvements include adding a 4,000-square-foot, two-story addition while reworking 8,000 square feet of academic spaces for the Cathedral School’s Lower School and Upper School.

With an especially challenging and intricate setting, the project required the existing school building to remain occupied and operational while work proceeded in a narrow footprint adjacent to the medieval Gothic-style cathedral, demanding precise and creative logistical planning as well as review by the San Francisco historic preservation community. The Office of Charles F. Bloszies FAIA collaborated with Truebeck Construction and school leadership including the school’s Building and Grounds Committee led by Melisa Seward Block, chief finance and operations officer.

“Today, our school is positioned for success into the future, able to continue its tradition of educational excellence,” says the CFO Block. “This is a transformational addition to the school’s building, not only adding important instructional and gathering space but also enabling the renovation of every existing classroom in the original building.”

Its setting, Grace Cathedral Close, encompasses an entire city block atop Nob Hill with several venerated and beloved historic landmarks. The steel-framed cathedral, encased in concrete, was completed in 1964 and sits amid ancillary buildings that are historic in appearance though constructed during the twentieth century. The Cathedral School for Boys  is perched at the upper-most corner of the site, adjacent to the cathedral’s apse end, presenting a concrete structure built in the 1960s that takes cues from Le Corbusier’s Chappelle Notre Dame du Haut in Ronchamp, France.

“The school’s strategic plan identified the need for new spaces facilitating contemporary learning practices, including where students from different grades could assemble for collaborative studies,” says Charles F. Bloszies, FAIA. “Our expansion and redesign allow for a large Co-Teach room for lower school boys, Kindergarten-3rd grade — doubling as space for social functions — and a Learning Commons for upper school boys in grade 4 through grade 8.”

Given the block was already jam-packed with buildings, Bloszies and his design team worked from a master plan which had identified a sliver of space between the cathedral and the school, where an outdoor terrace structure with classrooms below had been added in 2009. The site also afforded a structurally robust platform, the terrace itself, on which to erect an addition without requiring new foundation work or extensive seismic strengthening of the original building.

While the new addition site flanked the existing school’s footprint, its design elevated it as a new focal point by renovating existing classrooms on two levels and adding a wide hall connecting the main entrance lobby and the new addition. The resulting view into the addition from the entrance lobby, with a glimpse beyond to the cathedral wall and its stained-glass windows, essentially creates a new heart for the school.

Architecture and Structure
The multidisciplinary team at the Office of Charles F. Bloszies FAIA conceived the addition with a glass and aluminum curtain wall, light in appearance and weight, with its pale green color recalling the nearby verdigris building elements — avoiding traditional grey or black mullions which would have presented a dark form when viewed from the cathedral courtyard. From the inside, the addition captures views not seen before of the cathedral and the city beyond.

The structure and interior construction was completed during a three-month summer break, followed by the full buildout of the addition behind a temporary fire wall during the fall term. The unusual choice of a curtain wall system for the exterior reflected the exigencies of the project schedule: it was erected in just over a week, during the pandemic.

An authoritative source on such subjects as sustainability and beauty, urban infill challenges, elegant structures, and new solutions for homelessness, Charles F. Bloszies, FAIA, is a widely renowned architect, structural engineer, educator and writer. His book, Old Buildings, New Designs – Architectural Transformations (Princeton Architectural Press), is  regarded as a textbook for designing additions to existing buildings. His firm is known for ideas and interventions that both respect and enhance historic places and buildings; recent examples include the new San Francisco flagship for Blu Dot and the award-winning, 10-story infill building, 1 Kearny.