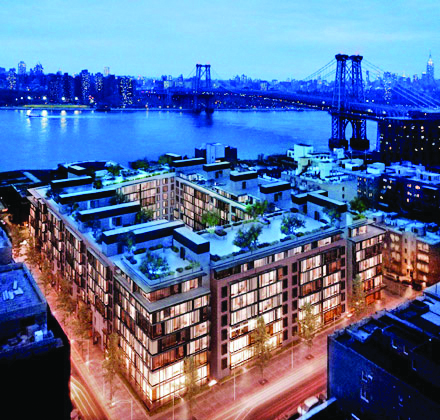 XIN Development, the U.S. arm of Xinyuan Real Estate, is a bit of an anomaly among the growing ranks of Chinese real estate investors in New York.

While its peers rely on joint ventures with local developers when they build in the states, XIN finances and builds its projects by itself.

Most of its executives aren’t Chinese and some don’t even speak the language. And while Chinese buyers have shown a disproportionate interest in Manhattan’s trophy towers, XIN chose Williamsburg as the site of its first major U.S. project.

Oosten, XIN’s 216-unit, $250 million condo development at 429 Kent Avenue, between South 8th and 9th Streets in Williamsburg, launched sales in September. According to the firm, sales are going well, with asking prices for available units ranging from $710,000 to $3.6 million.

XIN’s executive director of acquisition and investment, Omer Ozden, explained why he thinks the firm’s approach to the project is unique and could become a model for Chinese investment in New York real estate.

“This is the first major real estate project by a Chinese company in the U.S. without a local joint venture partner,” Ozden said. “The reason why we can do this is that the company has key people and management that are not Chinese, and are used to U.S.-style corporate governance.”

By relying on local personnel, XIN has the advantage of market knowledge. But also enjoys all the perks of being affiliated with a deep-pocketed Chinese investor.

When XIN bought the Oosten site for $54.2 million in 2013, it put up the entire equity itself, according to Ozden.

He explained that the company’s Chinese ties also give it access to cheaper raw materials — a major advantage in a market where high land prices keep profit margins slim.

But perhaps most importantly, XIN’s Chinese ties give it a certain sales advantage.

Although Ozden stressed that Oosten’s condos are designed to appeal to local buyers, he called the ability to sell units in China with the help of Xinyuan’s connections an important “downside protection”.

Oosten was advertised on Soufun.com, China’s largest real estate site, as early as March. Still, Ozden said most of the buyers so far are American.
For American-born Ozden, who speaks Mandarin and has had numerous stints working in China, Oosten is the culmination of a decade-long process.

He says he first began working with Xinyuan nine years ago, when the firm enlisted his help to raise capital in the U.S. After facilitating a major investment by Sam Zell, he helped Xinyuan become the first Chinese developer to list on the New York stock exchange in late 2007.

When the firm decided to venture into U.S. development in 2011, Ozden helped with the initial capitalization and put together a team in New York.
With XIN’s first major U.S. project off to a successful start, the company is starting to look for its next development.

Ozden said he is looking at one or two development sites in Manhattan and is also interested in developing in the outer boroughs as well as San Francisco, Miami, Los Angeles and Toronto.

To spearhead its expansion, XIN brought on the Turkish-born former architect and Columbia grad Can Tavsanoglu as director of acquisitions and finance last month.

Ozden believes XIN’s model of harnessing local expertise under the umbrella of a foreign development firm could become the norm for Chinese developers in the U.S.

Either way, he expects Chinese investment in New York real estate to continue growing. “This is only the beginning,” he said.

Is our industry too tough of millennials?