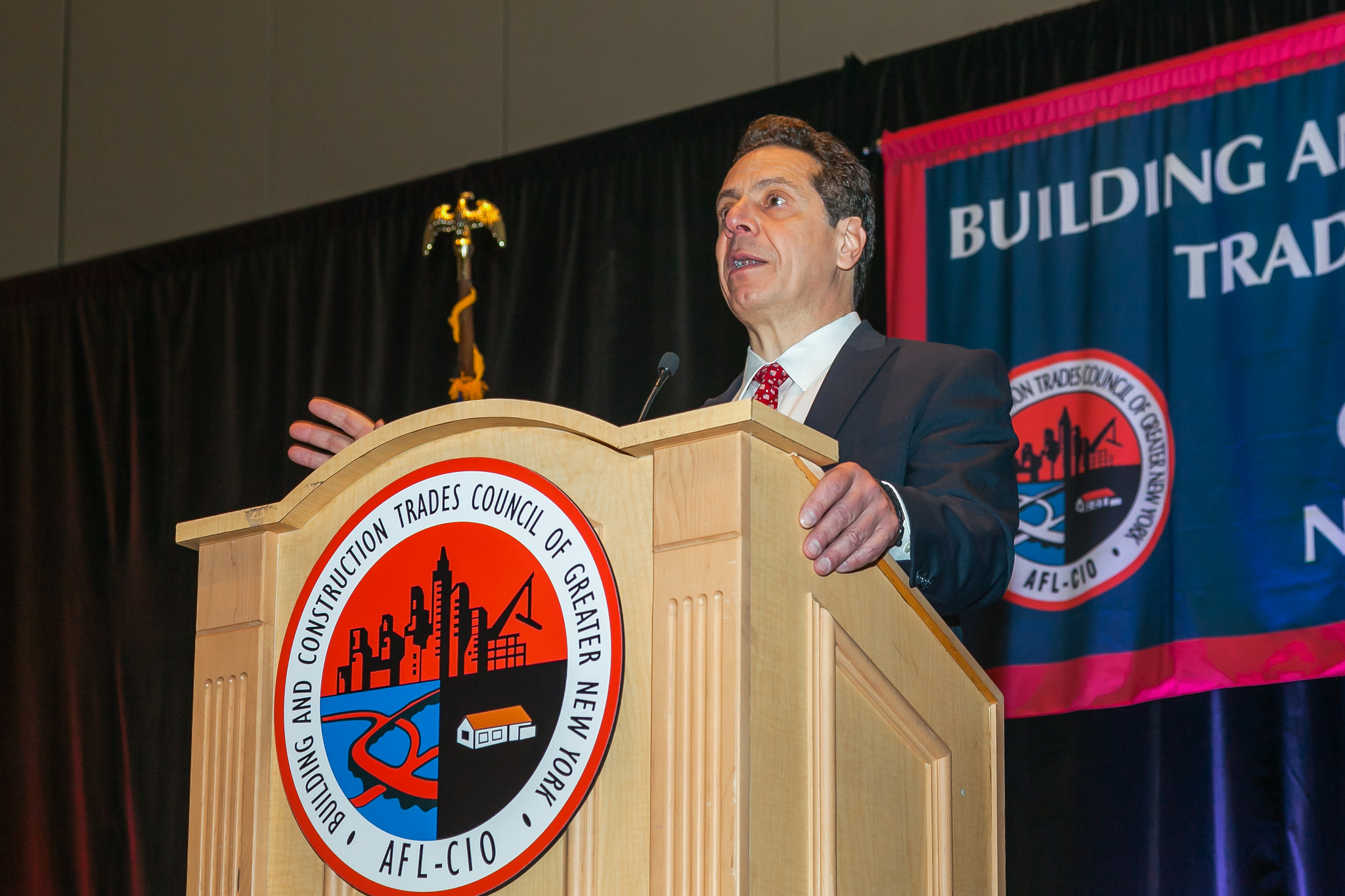 Cuomo vows to veto 421a bill with no union labor provisions

Governor Andrew Cuomo has vowed to veto any 421a legislation that does not include protections for union labor.

In a speech during the Building and Construction Trades Council of Greater New York Winter Conference last week, Cuomo said that the exclusion of a prevailing wage provision is “the camel’s nose under the tent” that may lead to weaker labor unions across the country.

“It is the camel’s nose under the tent. It is the thin edge of the wedge. If you can have New York City saying as a government that they’re going to exclude construction union, then my friends, that is a slippery slope, especially at this time. We’re going to win 421-a because I’m not going to sign the bill without union labor, period,” he said.

Cuomo, who warned that labor unions across the country are under attack, said that the “fight” for the 421-a program is not just about a tax break for residential developers, it is also a struggle over New York principles.

“421a was the City of New York Democratic bastion putting together a housing program where they basically excluded union labor from the program. That’s the fight. Whether government funded programs in New York should be union labor or not. And New York City sent a bill to Albany saying, ‘We’re going to build affordable housing and we’re essentially going to exclude union labor.ʼ And I said, ‘Over my dead body you’re going to exclude union labor.ʼ Thank you. It is short sighted. It is a misunderstanding of what the union construction jobs actually provide.ˮ

Last November, the REBNY and the Building Trades reached a deal to revive the lapsed 421a program.
The agreement, which came 10 months after the tax abatement expired, would require buildings in Manhattan to pay an average hourly wage of $60 for construction workers. Construction projects in Brooklyn and Queens, meanwhile, would be required to pay $45 per hour.

The Building Trades applauded Cuomo’s comments, saying that the governor is pushing for “common sense” legislation.

“We are extremely proud to work with Governor Cuomo, who understands the value of union labor and its role in building an affordable New York,” said Gary LaBarbera, the president of Building and Construction Trades Council of Greater New York.

We support him in the fight for common sense 421a legislation, which will pave the way for the development of needed affordable housing in New York City and the creation of good middle class union construction jobs. His vision and bold leadership on this and scores of other economic development issues across the state has been nothing less than extraordinary.”

Cuomo advanced the replacement plan in January. As part of the initiative, the tax break has been renamed as “Affordable New York.” The proposal is now with the State Legislature. If it gains approval, the plan is expected to create 2,500 units of affordable housing per year and 9,000 units in total.