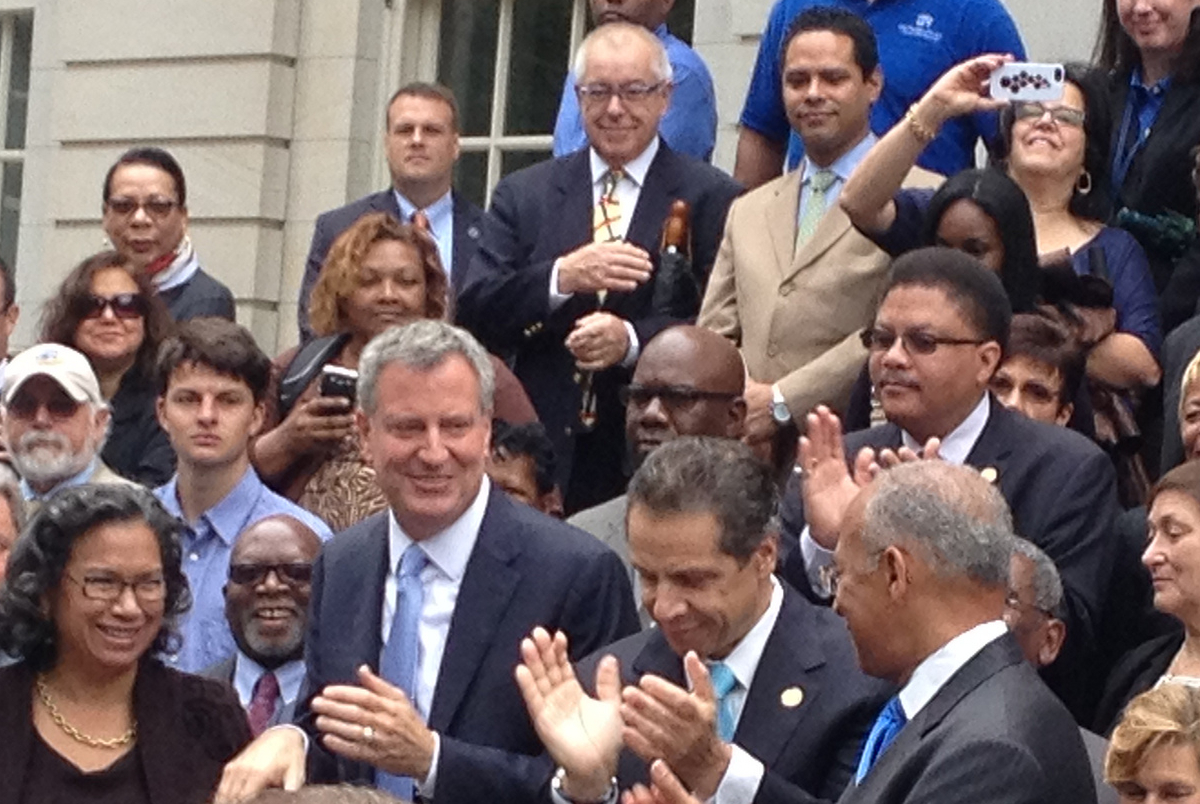 Cuomo, De Blasio unite on worries over expiration of 421-a

Now, however, the two have united in mourning the demise of the 421-a tax abatement program, thereby reversing their earlier strategy of bickering over the tax break.

The program has been a central issue in the spat between the two. They started trading jabs last year as state legislators decided on a package that included rent regulations and the tax break.

“The proposed reforms were a win-win for families in need of stable homes and for taxpayers. ‎It is deeply disappointing that these reforms were not enacted. We are facing an unprecedented crisis of affordable housing, and we must employ every tool at our disposal to confront it. We will continue to move forward with our partners at all levels of government as we implement the City’s plan to preserve and create 200,000 affordable homes,” de Blasio said in a statement.

With the expiration of the 421a program, the two are now working on finding an alternative. During an appearance at the Martin Luther King celebration in Harlem on Monday, Cuomo said that he and the mayor “are going to have to find a way” to stimulate the creation of affordable housing. “Right now, we have no affordable housing program that’s operating in the City of New York, and that is a major concern for the mayor and for myself,” he said.

The tax break expired last week as developers and labor unions failed to agree on reforms. The program has been in place since the 1970s. The biggest barrier during the negotiations was a prevailing wage requirement for construction workers in buildings with 15 units or more. After seven months of talks, neither side was unable to agree on a compromise.

“Unfortunately, despite a good faith effort by all parties, REBNY and the Building Trades were unable to come to a final agreement on the renewal of a 421-a program that would provide good wages to construction workers across the city,” said Gary LaBarbera, the president of the Building and Construction Trades Council of Greater New York.

According to REBNY, the expiration means the loss of 18,000 affordable housing units in the city over the next four years.

“Without a program like 421-a, one can’t build multi-family rental housing with a significant below-market, or affordable, component on a scale necessary to address the city’s needs. We are committed to working with stakeholders to fashion a program that will produce the affordable housing throughout New York City that is so desperately needed, ensures construction workers are treated fairly and creates job opportunities for city residents,” said REBNY president John Banks.

There’s still a chance that the program may resurface later on. De Blasio has promised to push for the resurrection of the tax break, saying that “Albany has a chance to make it right and fix it.”

With the expiration of the program, de Blasio lost a tool in his ambitious push for creating affordable housing. In 2014, he announced a plan for building or maintaining 200,000 affordable housing units over the next 10 years.