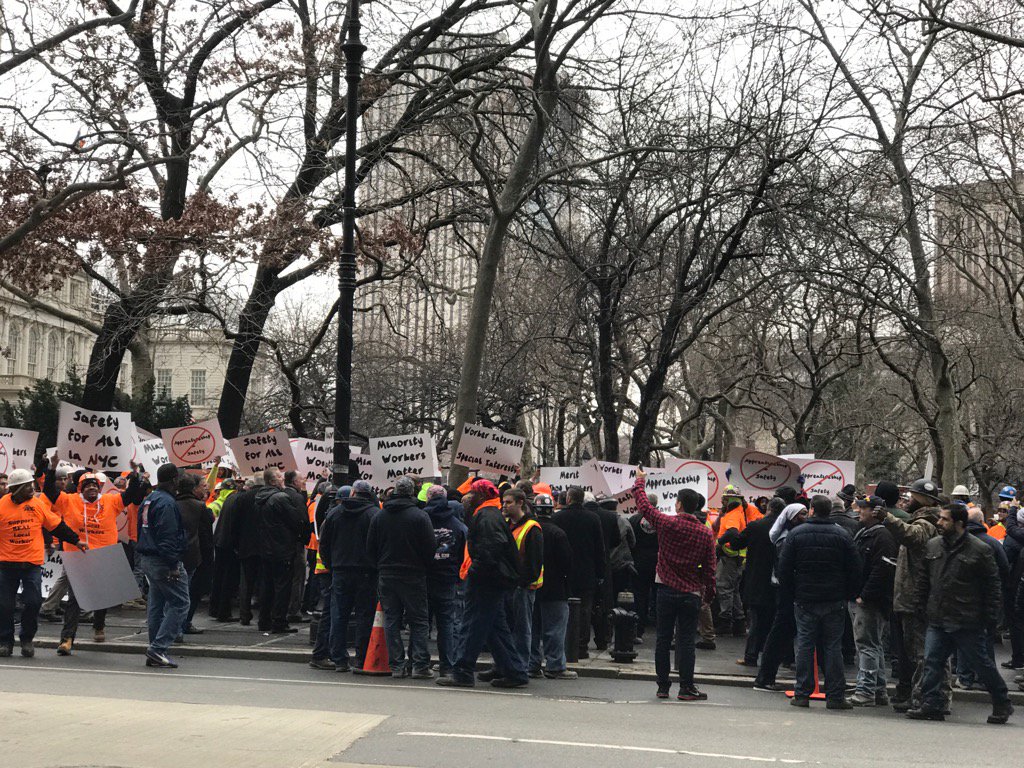 More than 200 construction workers from various trades, along with union officials, labor leaders and supporters rallied in Lower Manhattan this morning to urge the City Council to pass a package of bills intended to strengthen construction site safety.

Citing the rise in construction-related deaths, thousands of construction workers, along with elected officials and community leaders, have called on the City Council to pass the Construction Safety Act, a series of bills that will provide for professional training to improve the safety of all construction workers and the general public.

By midday, photos from the rally on social media showed several participants being arrested by police for blocking the street.

“If 30 people died at their jobs in the last two years in any other industry we wouldn’t have to fight for basic safety measures to be implemented in their workplace, but apparently for the safety of construction workers we do,” said Terry Moore Business Manager Local 46 Metallic Lathers and Reinforcing Iron Workers, in a press release. “So we’re out here today doing just that, fighting for the right of every worker to make it home safely at the end of the day. The question for the administration if they choose to oppose this legislation is, How many more must die?”

In the last two years, 30 construction workers have been killed while on the job. The Greater New York Laborers-Employers Cooperation & Education Trust, (GNY LECET) argue that developers have ignored basic safety requirements and training on job sites throughout the City in the rush to cash in on the real estate boom.

“Today we say enough is enough,” said Mike Hellstrom, Organizing Director, for the 17,000 member Mason Tenders District Council, LIUNA. “Too many workers have left for work in the morning, never to return home. Today we make sure that the dead have a voice in demanding safe work sites for all construction workers, union and non-union. Providing a highly trained, safe workforce on a constructions site, whether they are large or small, is not a political or economic issue; it is a moral issue. Today marks a turning point in our fight for safe jobs. The Speaker and City Council are to be commended for the leadership they have shown.”

The New York Committee for Occupational Safety and Health (NYCOSH) just released a “Deadly Skyline” report attributing the number of deaths to lack of training for the workforce. Of the 30 deaths over the last two years, 28 were at non-union jobsites.

“Improving safety must remain a priority on construction sites across New York City. There is nothing more important than protecting the public and ensuring that workers get home safely to their families each night,” said Banks. “But let’s always remember that good public policy is guided by facts and data – not politics and rhetoric. When it comes to construction safety, that rule still applies.”

“In fact, this proposal would cripple Minority and Women Business Enterprises (MWBE) and limit access to good paying jobs for our city’s large immigrant and non-native English speaking population,” said Banks. Mayor de Blasio also said he does not support the apprenticeship mandate.

This proposal would require apprenticeships on all projects over 10 stories tall. Banks called it an effort to increase market share for those who operate apprenticeship programs, and he points to data to back this up.

The data showed that between 2010 and 2015, the most unsafe projects in New York City were fewer than 10 stories tall. More specifically, 75 percent of all construction fatalities during the time period took place on developments fewer than 10 stories. Additionally, the data showed that after a construction accident occurred and DOB investigated, sites under 10 stories were 43 percent more likely to receive a safety violation.

“If projects below 10 stories are less safe, why are some groups claiming that the best way to improve safety is through an apprenticeship mandate on projects over 10 stories?” said Banks.

“The unfortunate reality is that discussions around construction safety in New York City have too often become mired in politics and battles over market share. That politicization – and the fiery rhetoric it employs – makes it much harder for New Yorkers to understand the facts around safety and choose the best path forward.”

You can read John Banks’ full comments on the issue here.