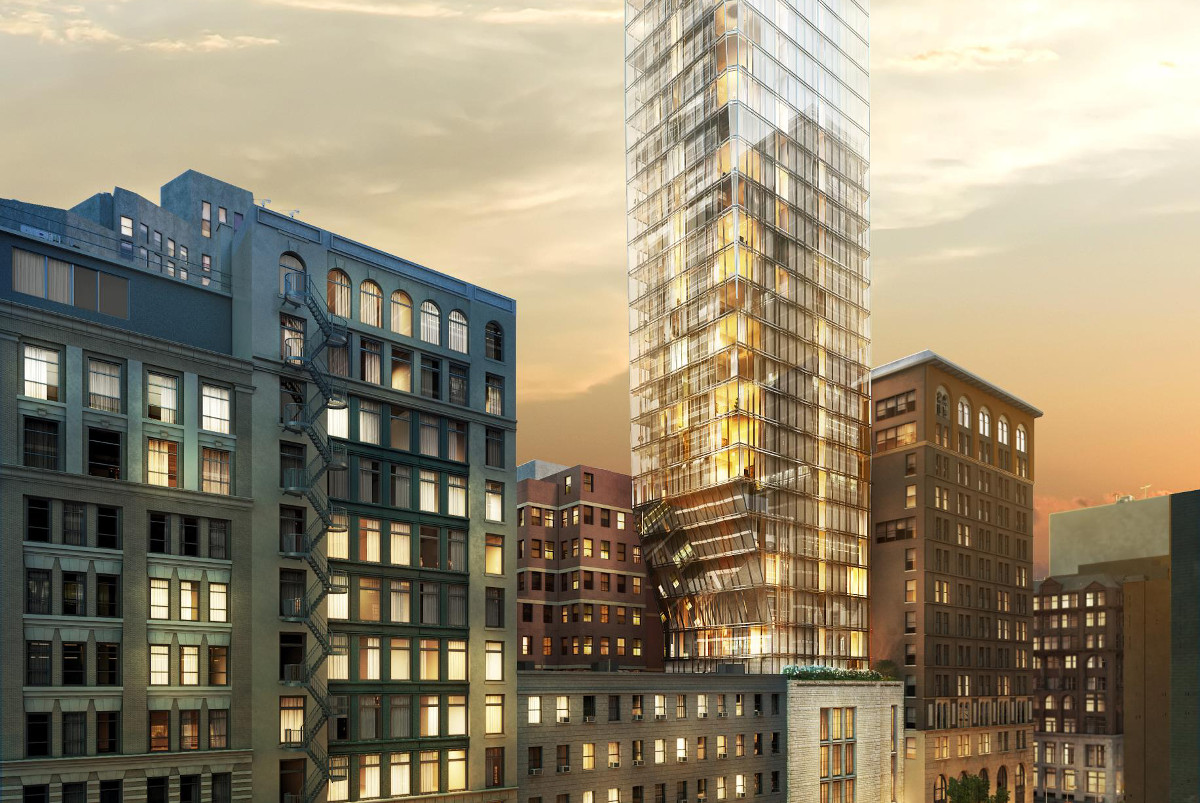 Ian Bruce Eichner’s New York City resurrection is gaining forward momentum, with one of his main projects, the planned glass-covered tower at 45 East 22nd Street, already 35 percent sold with still a year and a half left before the occupancy date.

The 65-story structure, which will stand 777 feet tall, will be the biggest tower in the Flatiron District once it is built, a situation that was more a result of circumstance rather than an active pursuit of size-based glory.

“When you start one of these assemblages, it’s kind of a magical mystery tour,” Eichner said.

“As I kept adding more air rights, I realized that I was basically doing something that wouldn’t be done again in the Flatiron. The chances that somebody’s going to put together a building taller than this, (it’s) very remote.”

Construction for the building is still in its early stages, with workers situated on the fifth floor. Eichner’s firm, the Continuum Company, launched sales for the property last February. Eichner said that they are currently negotiating contracts to hike sales to 40 percent, boosting chances that the property would be fully occupied by the time residents start moving in on January of 2017.

The early success of Eichner’s return may help dull flashbacks to past problems that coincided with real estate busts. He had huge losses during the downturn of the 1990s and the late 2000s, the most high-profile of which was when he defaulted on the Cosmopolitan Resort and Casino in Las Vegas.

In New York, he lost two towers in Manhattan, the CitySpire Center and 1540 Broadway, the 44-story tower located in Times Square. While the investments muted his attractiveness to some lenders, he still has enough clout to generate investments. The East 22nd Street tower is being constructed with $420 million in financing from Goldman Sachs, Dune Real Estate Partners and Fortress Investment Group.

The property is Eichner’s first project in New York City in about 15 years. He attributed his optimism for his new venture on two things: a modest outlook and a lack of competition at the price point he offers. “I’m betting that high-end condo prices will not go down,” he said.

While it’s a conservative prediction, some question whether the supply of high-end condo buyers is starting to run dry. Eichner believes that he is offsetting risks with the advantage his building’s location provides. “Where I would be nervous is if I was in the midtown corridor, in the 50s,” he said. “Doing a project that needed $6,000 or $7,000 per square feet. Because I think that market has a lot of competition. Who am I competing with? If I’m competing with someone in midtown, they’re paying twice as much.”

The structure, which is a glass building set on a granite base, had its design sourced through an architectural competition between three firms. The eventual winner was Kohn Pederson Fox Associates, which designed a tower that grew progressively wider to 125 feet on its way up. However, Eichner, who thinks that a glass tower didn’t fit the design scheme of the Flatiron District, edited the design (the term he used was ‘hand-wrenching’) and directed the installation a special granite base.

The granite used for the base of the building was shipped in from China. Eichner liked the type of granite that was used for the façade of the old US Customs Building (now the Museum of the American Indian). However, the New England mine that supplied the construction for the building had played out by the 1960s. They eventually found a replacement in a Chinese region that had sub-surface conditions identical to New England in the 19th century.

The granite base is not the only part of the building’s that’s sourced elsewhere. The glass that will cover the structure will come from Canada. “We live in a world in which people access materials wherever they can get them,” he said, adding that the glass will be attached to the structure by September.

Once it’s built, the property will contain 83 units ranging from one to four bedroom apartments. The rooms will have ceiling heights between 10 feet to 10.6 feet, with floor-to-ceiling windows that provides views of the Empire State Building and the Chrysler Building.

One bedroom apartments have an area of 1,146 s/f and start at $3.2 million. It ramps up to 4,655 s/f four bedroom units worth $20.75 million. The price of the apartments may change soon. Continuum has already hiked prices three times, and a fourth one is on the way.