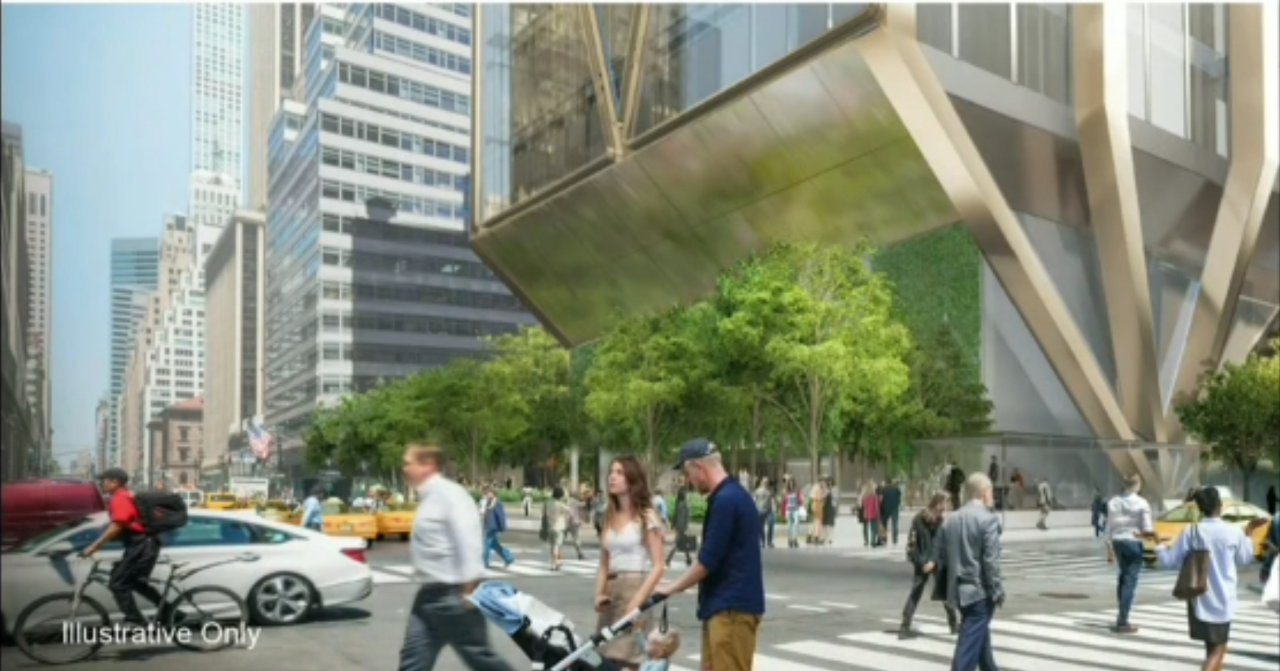 City Council Member Keith Powers led negotiations for improvements at the 270 Park Avenue site, which will result in thousands of new construction jobs for New York City and pedestrian improvements in Midtown.

The bank announced in February 2018 that it would remain in Midtown to rebuild its global headquarters after consideration of locations both in and out of New York City.

As a part of the project, JPMorgan made a $42 million contribution to the public realm improvement fund following an air rights purchase from Grand Central Terminal in 2018, per the requirements of East Midtown Rezoning.

JPMorgan is expected to welcome back 14,000 jobs to its new headquarters upon the project’s completion, serving as the area’s largest employer.

“JPMorgan’s plans for 270 Park Avenue exceed the vision for East Midtown Rezoning,” said Council Member Powers. “This development sets a precedent for what is possible for Midtown. The project fulfills the intention of the rezoning with more jobs and neighborhood improvements. I am hopeful others will use this as an example to bring substantial public impact. JPMorgan has been a conscientious partner in planning its new headquarters, and took input from the City and community in a way that will bring significant improvements to Midtown.”

“Today’s City Council vote is a critical step in making the new JPMorgan Chase headquarters at 270 Park Avenue a reality. On behalf of our company, I’d like to thank the policy makers and public officials involved in the process for their constructive engagement throughout this process,” said Jamie Dimon, Chairman and CEO of JPMorgan Chase & Co.

“City Council Member Powers has been a strong advocate to get to an outcome that is best for our company, the community and the City. I’d also like to thank the Speaker and the committee chairs on their leadership on this important issue. The vote today validates Chase’s commitment to New York City as our global headquarters and helps to ensure midtown remains a world class destination for business and New Yorkers.”

The zoning text amendment was modified through the Uniform Land Use Review Procedure (ULURP) with JPMorgan responding to feedback that increased the amount of public open space on the site from 7,000 to 10,000-s/f along Madison Avenue.

The company has also committed to more than 35,000 s/f of sidewalk enhancements and open space at the street level.

“Today is a major step forward in delivering benefits that were promised to the East Midtown neighborhood and New Yorkers across the City,” said Deputy Mayor for Housing and Economic Development Vicki Been.

“The signing of this text amendment represents a big win for New York City,” said Gary LaBarbera, President of the Building and Construction Trades Council of Greater New York. “We look forward to working on the visionary JPMorgan project, which will be built entirely by union hands and create even more middle-class careers for the hardworking men and women in New York.”

“We are happy to support JPMorgan Chase’s project to build a state-of-the-art, energy efficient tower in the heart of Manhattan,” said Kyle Bragg, Secretary Treasurer of 32BJ SEIU, the largest property service union in the country with 80,000 members in New York. “The projects will bring much-needed good jobs into the community while allowing 32BJ members to build their green building skills.”

East Midtown was rezoned by the City Council in August 2017 to revitalize economic, business, and job growth in the central business district, while improving public open space and transportation in the 73-block commercial area.

According to the Department of City Planning, developers are incentivized to achieve maximum development through pre-identified transit improvements, the transfer of landmark air rights, or the rebuilding of overbuilt floor area.

A significant component of the rezoning included the creation of a District Improvement Fund, also known as the public realm improvement fund, which developers contribute to in order to fund public improvements from the sale of landmark air rights.

Canadian tenant portal expanding in US