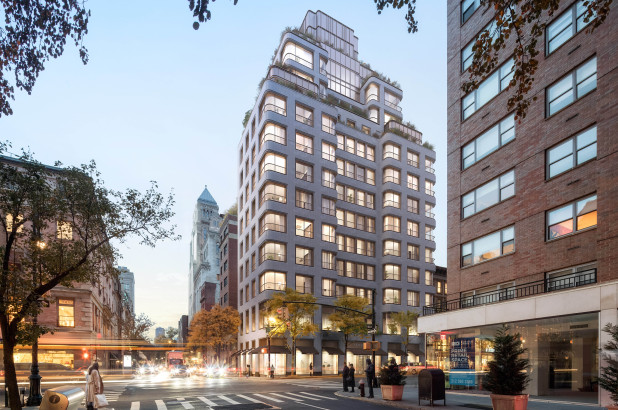 The fully reimagined 97,000 s/f building will be home to a new flagship Giorgio Armani retail boutique and 19 luxury residences designed by Giorgio Armani.
Giorgio Armani will conceive the residential interiors and the designer intends to take up residence within the building upon its completion.

COOKFOX will serve as architect on the project and redesign the new building to “reflect the evolution of the Armani brand.”

Iconographic elements of places and cultures, the appeal of new materials and unusual chromatic ranges have become the key style inspirations for individual interior design projects since 2004, when Giorgio Armani signed a partnership for the first Armani Hotel inside the Burj Khalifa in Dubai. This initiative was then repeated in other cities, from Miami to Istanbul, from Mumbai to Manila, from Tel Aviv to Beijing and London and now New York.

The proposed project is designed to be in harmony with Madison Avenue’s streetscape while reflecting the history of the district. The building’s natural stone materials, including brick and limestone, will contribute to and balance the existing neighborhood.

The new building will include a series of setbacks and outdoor terraces that break up the massing, create definition from the street and provide a visual connection to Central Park.

“New York is one of the world’s major fashion capitals, and Madison Avenue is by definition an iconic luxury location,” said Giorgio Armani. “In the 1980s, when I opened my first Giorgio Armani boutique in Manhattan, I chose this exclusive and refined area because it was perfect for the timeless elegance and attention to detail I wanted to communicate. Today, 30 years later, I still believe this place reflects my philosophy and my aesthetic vision.

“With this special project, I continue the journey I began over 10 years ago with my Armani/Casa Interior Design Studio, through which I look for innovative creative solutions that express my personal concept of luxury and refinement, while respecting the local culture and spirit,”

SL Green, which took control of the building in 2012, will lead the development in collaboration with Armani. “The Armani brand is synonymous with Madison Avenue and we are thrilled to partner with Armani to solidify its lasting presence along one of the world’s most recognized retail corridors while also introducing the timeless

Armani lifestyle to the residences above,” said SL Green CEO Marc Holliday. “Armani’s commitment to Madison Avenue and New York City is unwavering and the brand’s leadership will preserve all that we, as New Yorkers, love about the Upper East Side of Manhattan.”

“This special project is an opportunity to design a modern home for the next generation of Armani’s presence on Madison Avenue,” said Rick Cook, Principal at COOKFOX.

“Our approach is to reinterpret the design sensibility of classic Madison Avenue building, like The Carlton House at 21 East 61st Street and 45 East 66th Street, to create a contemporary and iconic residence and retail building for both the Upper East Side Historic District and the Armani brand.”

The plan will require approval of the Landmark Preservation Commission. Construction is expected to begin in 2020 and be complete in 2023.