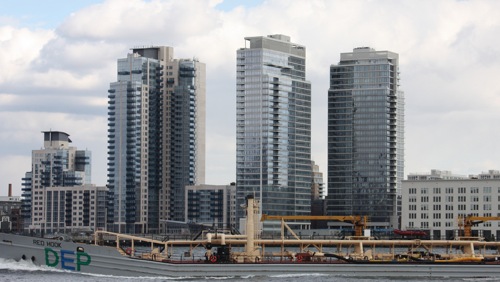 A record sale in Brooklyn and for-sale Queens building are proving once again that the outer boroughs are booming.

TIAA-CREF is buying a six-story residential building at 250 North 10th Street in Williamsburg for $169 million from a partnership between real estate investment firm LCOR and the California State Teachers Retirement System.

The sale of the 234-unit luxury rental completed last year is the largest in Williamsburg so far in 2015. The building was purchased as a development site in 2011 by LCOR and CalSTRS from the Rabsky Group for less

$20 million. Andrew Scandalios of HFF represented the sellers. He had no comment on the deal.
Meanwhile in Long Island City, Citigroup’s 50-story Citicorp building, could go for half-a-billion dollars.
The tower at One Court Square has 1.4 million s/f of office space. Last August, Savanna purchased a controlling stake for an undisclosed amount.

In 2012, an investor group led by David Werner acquired the building from SL Green Realty for $481 million.

Bob Knakal of Cushman & Wakefield is one of the listing agents representing the seller, according to published reports. He did not immediately respond to a request for comment.
In February, Citigroup announced it was selling a development site adjacent to its One Court Square building, a site likley to attract apartment developers, adding to the hotbed of residential development in the Court Square neighborhood.

The New York Times reported at the time that the site could fetch as much $150 million. Jon Caplan and Richard Baxter of Jones Lang LaSalle are leading a team marketing the site.

In January, the Department of City Planning made preliminary plans to upzone parts of Long Island City, including Queens Plaza and Court Square, which would pave the way for more residential development.