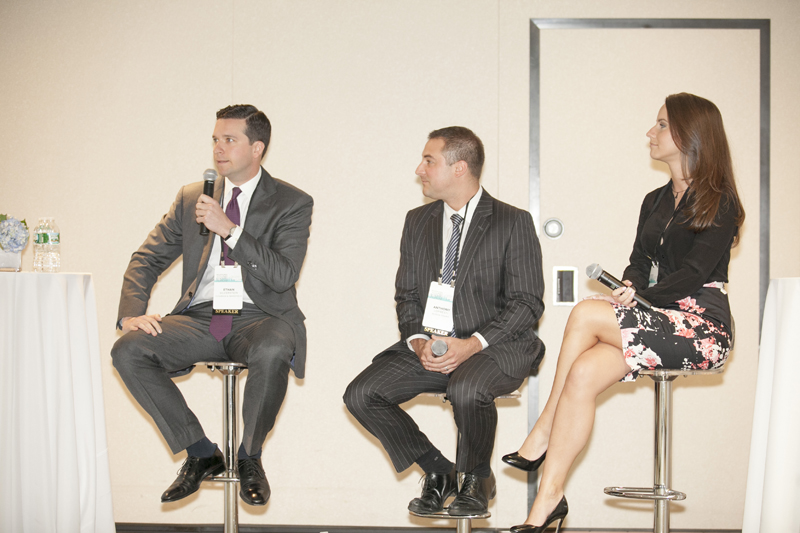 The group spoke about their early experiences in the business and offered advice to those just beginning their careers.

Both LoPresti and Silverstein entered real estate just prior to the collapse in 2009, one of the lowest points in the market’s history.

“There is such a process in this business and there is so many different components and things that you have to learn and there’s no formal training program either,” said LoPresti when describing his early days on the job. “When you start you’re trying to learn and navigate through everything.”

Silverstein was on track to become a lawyer but before diving headfirst into the field, he opted to give working at Cushman & Wakefield a chance.

“It took me about three and half years,” Silverstein said when asked when the career risk began to turn profitable for him.

After closing a deal in which the landlord initially refused to pay the commission, Silverstein considered quitting the industry but after 6 months, he was rightfully paid his due and pushed forward.
“If you do believe in yourself you can make money,” said Silverstein. Miller had a bit of a smoother start, but was soon met with the same reality that most young real estate professionals face.

“I was very lucky. I started as an independent contractor as a sales person,” Miller told the audience. “I was able to close a lot of my very, very first clients, so I thought ‘Wow. This job is easy.’
“And then of course later on I realized that it doesn’t always happen as smoothly for every single client you interact with. There are some rough patches.”

Miller said that she pushed through the eventual bumps in the road by making the job an absolute priority and was often the first one to enter the office and the last one to leave.

“It’s the work ethic that allowed me to make money sooner rather than later,” Miller continued.
“You have to work extremely, extremely hard. The misconception may be that in real estate anybody can do it anybody can get in and anybody can become successful,” she said.

“If you’re going to get into it and not work very hard, you’ll be out of this industry really fast. I think that the most important thing is that you have to be prepared that it’s going to take a while before you see any type of success,” said LoPresti.

“You just need to be prepared that it’s going to take some time and sacrifice. While the rest of your friends are making money and taking vacations, you’re probably not going to be able to do that for a few years.”

All three panelists are optimistic about New York’s future and each was very happy with their chosen career path.