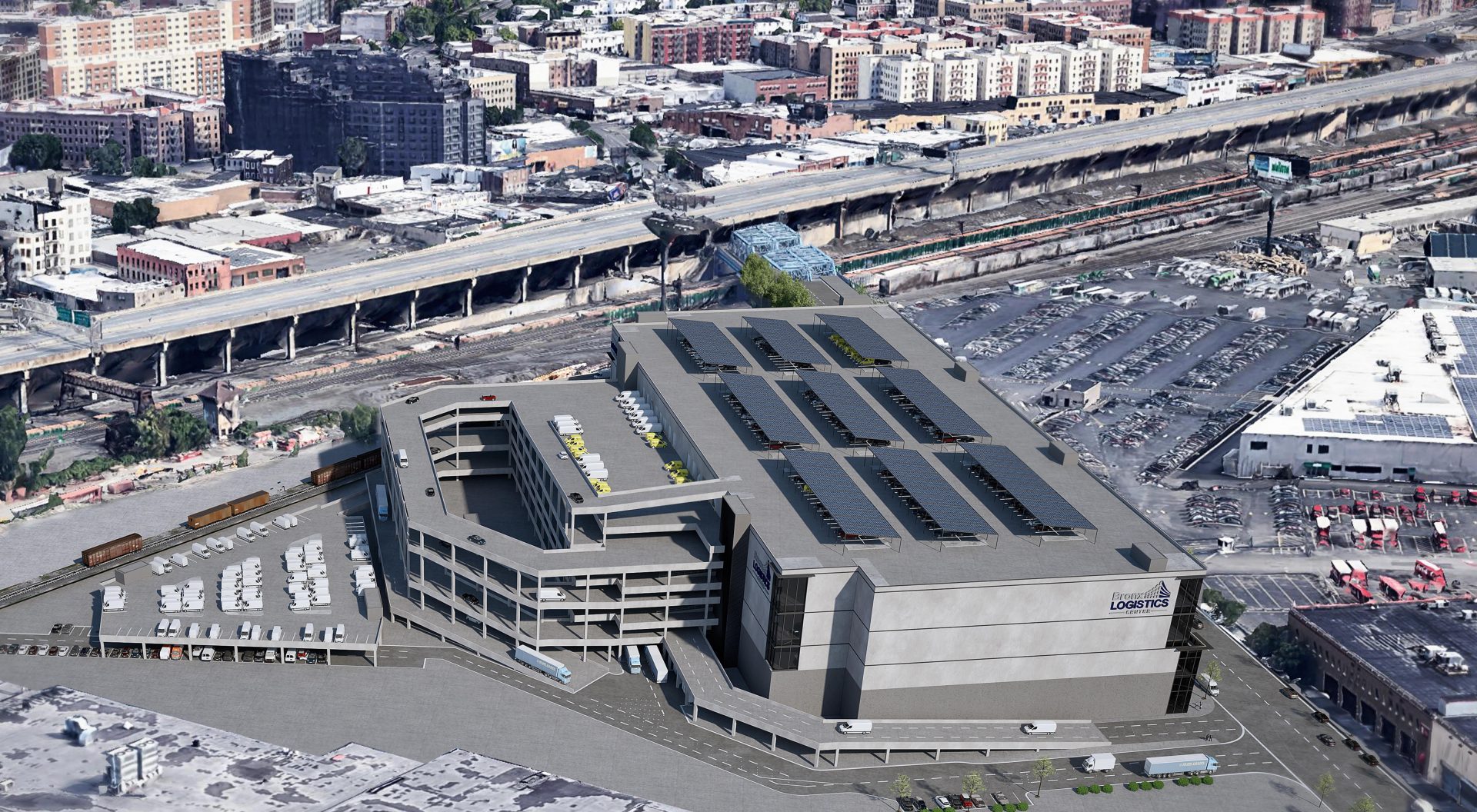 “Last-mile” delivery in the Greater New York area is about to take a giant step into the future.

Because of the large site and topography, Bronx Logistics Center will be one of the very few buildings in the United States that offers separate, dedicated truck ramps to the various levels.

The 1.24-million-square-foot distribution facility, which is located in an Opportunity Zone, will be the largest multi-story distribution facility in the region and the only one that provides a rail transport option. Bronx Logistics Center will also include electric charging stations, dedicated car-pool areas, and an extensive rooftop solar panel system.

“We acquired the last of five parcels in December and plan to break ground later this year,” says Turnbridge Equities managing principal Ryan Nelson. “We are excited to be moving forward quickly, given the incredibly tight market and surging demand for Class-A distribution space in New York City.”

The Bronx Logistics Center, at 980 East 149th Street, will be less than two miles from the massive Hunts Point Food Distribution Center, and served by several major highways and many subway lines. It is just off the Bruckner Expressway, less than 10 minutes from Manhattan’s Upper East Side. LaGuardia Airport lies just across the East River via the Bronx Whitestone or Triboro/Robert F. Kennedy Bridges, and JFK International Airport is only a 20-30-minute drive.

“The site is ideally situated to serve the entire New York City region’s 20 million people, including those in Manhattan, the boroughs, Westchester and northern New Jersey, and will accommodate a very large workforce via public transit,” says Mr. Nelson, who estimates that the Bronx Logistics Center will be operational in 2022. “We’re located within a five-minute walk of multiple subway stations, are adjacent to multiple interstate highways and have dedicated freight rail service into the project, so we’re offering something genuinely unique to the market.”

Bronx Logistics Center will offer market-leading access, with levels one through three each containing dedicated drive-in access ramps for trucks and 17 dock doors per floor. The top level will be accessed by 14 drive-in ramps for vans and automobiles. Floor plates will average 250,000 square feet, with clear heights of 24 to 28 feet throughout. The efficient layout and abundant loading doors and parking will permit one or more tenants per floor, each with dedicated loading areas.  A combination of surface, structured and rooftop parking will accommodate more than 1,400 vehicles.

“E-commerce is growing not merely in volume but in sophistication, and its infrastructure must evolve to satisfy an unprecedented array of demands,” says Andrew Joblon, founder and managing principal of Turnbridge.

“That’s why Turnbridge is creating a truly state-of-the-art center, where tenants can move large inventories with the kind of efficiency that next-day and especially same-day delivery requires. Our objective is to raise the bar on what a logistics center must offer.”

Over the last two years, Turnbridge has acquired and built a 3.5-million square foot portfolio of last-mile industrial space, comprising facilities in New York (Brooklyn, Queens, the Bronx and Rockland County) and in New Jersey (Newark and Parsippany).  Turnbridge has deployed over $1.5 billion in total deal capitalization across all asset classes, since the company was founded in 2015 by Mr. Joblon.

“We continue to be extremely bullish on the industrial market in New York/New Jersey,” Mr. Nelson says. “We leased over 500,000 square feet last year at our last mile properties and will continue to expand our portfolio.”