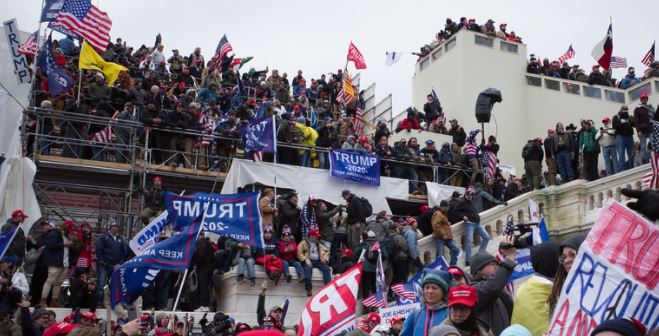 For the first time in its 20-year history, prominent real estate lender Signature Bank has issued a comment on the nation’s politics with a call for President Donald Trump to resign.

“We have never before commented on any political matter and hope to never do so again,” said the New York-based bank led by Joseph J. DePaolo. “However, as Americans we are deeply, deeply saddened by the rioting and insurrection which took place in the most sacred of American institutions, our United States Capitol.”

As well as closing Trump’s personal accounts at the bank, Signature has also warned it “will not do business in the future with any members of Congress who voted to disregard the Electoral College.”

The statement followed multiple reports that one of Trump’s biggest lenders, Deutsche Bank, is also moving to terminate its links with the Trump Organization and brokerage giant JLL is washing its hands of Trump contracts, including the marketing of Trump International hotel in DC.

Deutsche Bank has not issued a formal statement and a spokesman for JLL told Real Estate Weekly, “We decline to offer additional comments at this time.”

But in a scathing rebuke, Signature Bank demanded Trump’s resignation for fanning the flames of hate that led to last week’s attack on the Capitol Building by thousands of Trump supporters.

“As Americans we are deeply, deeply saddened by the rioting and insurrection which took place in the most sacred of American institutions, our United States Capitol,” said the statement.

“To witness a rioter sitting in the presiding chair of the U.S. Senate and our elected representatives being told to seek cover under their seats is appalling and an insult to the Republic.

“We witnessed the President of the United States encouraging the rioters and refraining from calling in the National Guard to protect the Congress in its performance of duty.

“At this point in time, to ensure the peaceful transition of power, we believe the appropriate action would be the resignation of the President of the United States, which is in the best interests of our nation and the American people.”

He said, “Last Wednesday, a mob incited by the President of the United States attempted to violently overthrow our Democracy.   As the gravity, severity and carnage of this sedition has revealed itself, our shock has turned to anger, and troubling questions are emerging of how this appalling event was engendered and transpired.

“What is clear is the value of truth, the danger of demagoguery and the necessity for restoring a more civil discourse. “

The Real Estate Board of New York condemned the violence.  In a statement, president James Whelan said, “The violent actions by rioters at the U.S. Capitol are disgraceful, anti-American and must be condemned by every elected official in our nation, regardless of party affiliation.”

Meanwhile, the PGA has cancelled its plan to hold the 2022 PGA Championship at Trump’s New Jersey golf course in Bedminster.

“We find ourselves in a political situation not of our making,” said Seth Waugh, the CEO of the PGA of America, in a statement. “Our feeling was, given the tragic events of Wednesday that we could no longer hold it at Bedminster.”

It is the second time the PGA has turned its back on Trump after cancelling its 2015 Grand Slam in Las Vegas after he made disparaging remarks about Mexican immigrants.

In New York, the Trump Organization is under investigation by the Manhattan District Attorney’s office and New York Attorney General, both of whom have subpoenaed Deutsche Bank about its lending relationship with the company.

Investigators are looking into whether the Trump Organization misled or defrauded the lender by inflating the value of some of its assets, according to court filings.

In Scotland, where Trump owns two golf courses, First Minister Nicola Sturgeon said he won’t be allowed to visit Scotland to golf during a surge in the COVID pandemic there.

Responding to speculation he might travel to a Scotland to avoid President-elect Joe Biden’s inauguration, Sturgeon said, “We are not allowing people to come in to Scotland without an essential purpose right now and that would apply to him, just as it applies to anybody else.

“Coming to play golf is not what I would consider to be an essential purpose.”

Trump reportedly put his Mar-a-Lago complex in Florida up as collateral to borrow money from Deutsche Bank in 2016 to overhaul Turnberry, his three-links course that overlooks Ailsa Craig.