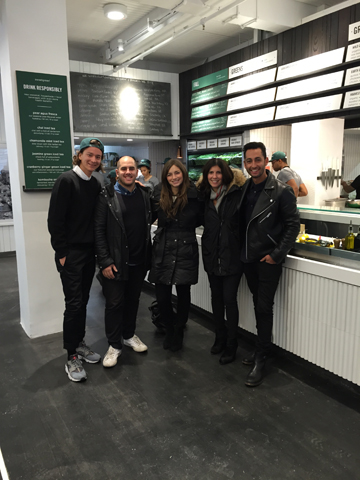 SCG Retail  announced the signing of a 2,400 s/f lease for Sweetgreen, at 100 Kenmare Street in Nolita/Soho.

According to David Firestein, one of three SCG Retail brokers that work with Sweetgreen, “Soho/Nolita is perfect for Sweetgreen’s farm-to-table approach to convenient food. Kenmare is a great location because it’s strategically positioned to tap into the tourist flow, the daytime office crowd, and the residents who are hungry night or day.”

Sweetgreen reinvented the fast-food category with a ‘locally sourced and organic ingredient’ approach in 2007, when its founders, three recent graduates opened its first location in Georgetown. The three incorporate a commitment to community and sustainability into everything they do, from the food, to packaging, even store design. With  22 north east locations, Sweetgreen is poised to revolutionize the category coast-to-coast.

Sweetgreen also takes a unique approach to its NYC location strategy, formulated with the help of SCG Retail. They avoid the highest rents in appropriate areas to maintain the highest quality, locally-sourced ingredients and still offer healthy meals at a reasonable price.

“It’s that combination that makes Sweetgreen an instant success wherever they open,” said Taryn Brandes, another of SCG Retail brokers on the Sweetgreen team. “The food is authentic and so is their commitment to building real relationships in the communities where they operate.”

“We’re all about working with companies that get our values,” said Nicolas Jamet, one of Sweetgreen’s founders. “The people at SCG Retail understand us, food and the city. They were very helpful in demystifying the New York City landscape. We’re very excited about doing much more here.”

One of the reasons SCG Retail was so bullish on Kenmare Street is the food renaissance taking place in the neighborhood. “You’ve got Parm, Rubirosa and Taim doing well on Mulberry Street,” said Brandes, “and there’s la Esquina, Ed’s lobster Bar and Osteria Morini on Lafayette. Sweetgreen adds to the area’s ‘cool food factor,’ and taps into the neighborhood’s demand for healthy, quick options.”

Jacquleine Klinger of SCG Retail also represented Sweetgreen on Kenmare. She was one of last year’s REBNY Deal of the Year winners. Klinger loves working with innovative concepts. “I was so excited the first time I walked into the original Sweetgreen location in Georgetown,” said Klinger. “I just knew they had tremendous potential nationally.”

100 Kenmare Street is owned by Coral Realty and they were represented by Darrell Rubens and Aaron Fishbein of Winick Realty.

SCG Retail is actively seeking more metro area locations for Sweetgreen. “We have a unique combination of attributes that a site must meet for it to be in their portfolio,” added Firestein.

“That’s why we’ve got a team of brokers working on this. The Sweetgreen approach has really resonated here at SCG. People want to feel as if they are part of community and everyone in the office is helping us find them the right places in the city because this is a win/win for all.”