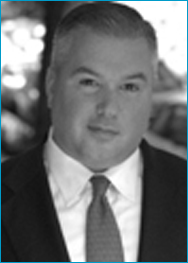 Rutenberg COO Michael Barbolla is working to make his firm even better.

Barbolla, who was recently promoted from general manager to COO, is leading a re-branding campaign for his company, including revamping its website.

A native of upstate New York, Barbolla attended the College of St. Rose in Albany, where he earned bachelors and masters degrees in communications and educational psychology. Following graduation, he moved to New York City in 2000.

While still upstate, he ran a foundation for people with learning disabilities called Wildwood Programs. He also worked at the New York State Bar Association in the membership division.

Once in New York City, he was the director of membership at the New York Botanical Garden. With a solid foundation in non-profit, he decided he needed a career change, and like many people who enter the real estate industry from other fields, the spark came from a friend.

“A friend of mine who had been in real estate at a top firm spoke about it and I wanted a little more flexibility, a little change from non-profit, which had been my background, and thought real estate would be great,” he said.

“In nonprofit, I dealt with people on boards that had means to donate large sums of money and had events at their homes. I always found that to be fascinating. I kind of wanted to be at the helm of my own ship as well.”
He was offered a position at the Corcoran Group, and it “worked perfectly.”

“I’d always been in management for my whole working career, so I thought it’d be a great marriage,” he said.
After two years at Corcoran, Barbolla moved to City Sites and became general managing director. Rutenberg Realty was beginning to form, and he jumped at the chance to work for the fledgling company, where he joined as general sales manager in 2007.

“It was a start-up then and exciting and a chance to work with people I knew,” he said. “Eight years later, it’s been fantastic, and we’ve seen huge growth.”

Barbolla recalled signing the company’s first agent – a woman who came over with him from City Sites.
“We had about three people,” he said. “Now we have 515 people.”

Last month, Rutenberg announced that Stefani Markowitz would take over as president of the firm. Markowitz, 27, is the granddaughter of Richie Friedman, the co-founder of the real estate firm.

She previously worked for The Heddings Property Group from 2009 to 2012, specializing in residential leasing and sales of condominiums, cooperatives and townhouses in Manhattan. Following her tenure at Heddings, she joined The Modlin Group in 2013 where she focused on the luxury real estate market and ran the sales office of a Condominium conversion project in Chelsea.

Barbolla is excited about Markowitz arrival and the company’s future in New York City.

“We have a great model that really works for the agent,” said Barbolla.

“The broker is really at the helm of their own ship,” said Barbolla. “We provide them with listing data and tools to help, but they get the lion’s share of money.”

Last year, one of Rutenberg’s agents had the third largest commission in New York City, netting $630,000. The company’s commission model for rentals is similarly structured.

“I would say we have been the most successful of all of them. I think we opened at the right time and right place and did the right marketing in the beginning (of their specific model) I think it positioned us as a lead player in this model,” he said. “It’s been amazing ever since. The agents do a lot of recruiting for us, they’re like soldiers for us.”

His move to New York City from upstate was one of the big turning points in his career, said Barbolla.

“It exposed me to a different group of people and different opportunities,” he said. “I had a wonderful career upstate, and people that I met down here led me to my current career.”

He called working at Rutenberg “one of the best experiences” of his life.

“Everywhere I’d been was established,” he said. “I had never worked at a start-up in my life. The management team was small, we were incredibly nimble and able to change on a dime, without being encumbered by a holding company or someone who owned the company. Being in that position at the bottom level in terms of starting a firm and seeing it grow has been the most rewarding experience.”

In the future, Barbolla hopes to see 200 more agents come on board at Rutenberg, and is thinking about dipping into commercial real estate as well.