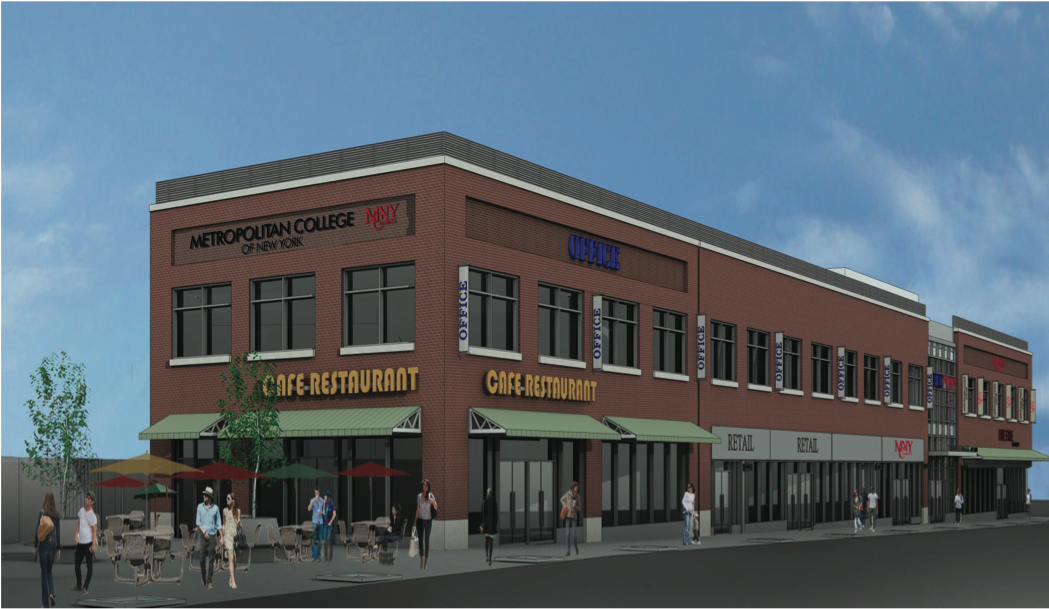 New York-based developer Triangle Equities announced the achievement of several milestones in the development of the $35 million, 88,000 s/f Triangle Plaza Hub at 149th Street in the Bronx.

The project will provide the community with two anchor tenants that fill currently unmet needs.

Fine Fare supermarket will bring fresh produce and quality meats to the neighborhood and Metropolitan College of New York will relocate its Bronx campus to the development.

Additional space has been leased to Vista Optical, a provider of independent eye exams, glasses and contact lenses.

Triangle has successfully navigated an important aspect of the construction process.
Following completion of substantial underground work in immediate proximity to live subway rail tracks, the first steel columns, which will support the two-story structure, have gone into the ground.

The start of structural work comes after months of difficult, but necessary, site excavation and foundation work, but demonstrates the project is moving along on schedule.

“We’re delighted to be moving full speed ahead with what is a special and important development initiative for the South Bronx,” said Triangle president Lester Petracca.

“We’re excited to be making great progress in developing a community-centric location that will both provide essential amenities to a deserving area and, we believe, serve as a catalyst for the continued rejuvenation of the entire neighborhood.”

The development of Triangle Plaza Hub will transform what had been an underutilized municipal parking lot in a generally underserved area into a mixed-use commercial and community facility located at the Hub, a transit center for the Bronx, through which over 200,000 people pass daily.

In addition to the commercial and retail aspects of the development, an 8,000 s/f public plaza will also be constructed. The project will be developed in accordance with energy efficiency and green building principles with a minimum goal of LEED Silver certification.

The Metropolitan College of New York has over 1,100 enrolled students. This development will enable the school to relocate to a new Bronx campus, offering the potential for both new job creation and increased access to higher-education opportunities for area residents.

Triangle partnered with the New York City Economic Development Corporation (NYCEDC), Empire State Development, the Goldman Sachs Urban Investment Group, the Low Income Investment Fund and United Fund Advisors, LLC to make the development a reality.
Petracca noted that the project – which involved numerous approval processes, a highly innovative financing structure based on New Markets Tax Credits financing and a tremendous construction challenge – is complex and ambitious, but one that Triangle was thrilled to take on.

“One of our cornerstones as a development company is that we actively seek out the complex challenges that allow us to create significant additional value,” said Petracca.

“Of course, navigating these complexities requires the formation of a number of effective partnerships, and we’re appreciative of the tremendous support and cooperation we’ve received from all of our partners in this venture.”