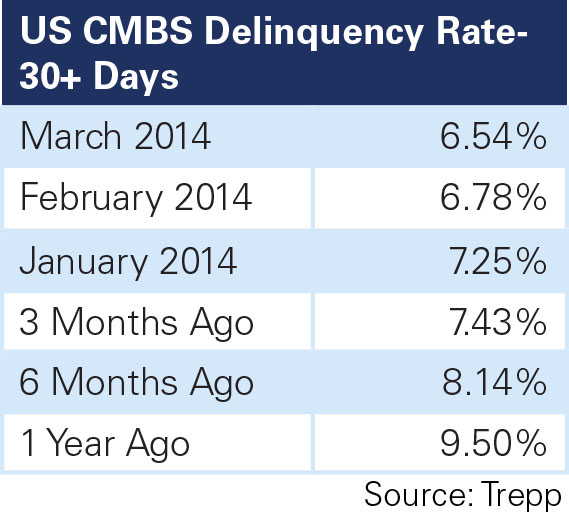 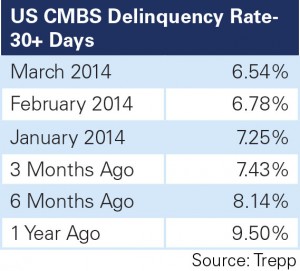 The rate for US commercial real estate loans in CMBS fell 24 basis points in March to 6.54%, according to the newest Trepp report.

The last time the Trepp US CMBS delinquency rate was below this level was over four years ago, in January of 2010. Today’s rate is 288 basis points lower than where it was a year ago.

Trepp, a provider of information, analytics, and technology to the CMBS, commercial real estate, and banking markets, credits some of the month-over-month improvement to the ongoing CWCapital distressed asset sales.

In the first three months of 2014 alone, the CMBS market saw 114 basis points of downward pressure on the delinquency rate due to previously delinquent loans being resolved with losses.

While not all of these resolutions are a result of the CWCapital assets, they have contributed significantly to the rate’s improvement.

“The CMBS market had the pleasure of singing the same happy refrain in March, as delinquencies continued to fall,” said Manus Clancy, senior managing director at Trepp.

“We had anticipated a large drop in the rate due to the CWCapital assets, but that descent has been extended, as the notes didn’t really begin to make it through remittance cycles until the New Year. We suspect the rate will stabilize somewhat in coming months.”

New delinquencies totaled $1.7 billion March, which was up from $1.3 billion in February. The total number of delinquent loans was down month-over-month, as there are now $34.6 billion delinquencies.

All five major property types improved in March. Retail dipped just six basis points but remains the best performing major property type. Multifamily saw a 13 basis-point improvement, but is still the worst performer among the group with the only double digit delinquency rate.

The Numbers:
• The overall US CMBS delinquency rate decreased 24 basis points to 6.54%.
• The percentage of loans 30+ days delinquent or in foreclosure was 6.78% in February, and 7.25% in January.
• The percentage of loans seriously delinquent (60+ days delinquent, in foreclosure, REO, or non-performing balloons) is now 6.28%, down 26 basis points for the month.
• If defeased loans were taken out of the equation, the overall 30-day delinquency rate would be 6.80% — down 23 basis points from February.
• There are currently $34.6 billion in delinquent loans, which is down from $36 billion last month. This number excludes loans that are past their balloon date but are current on their interest payments.
• There are $ 42.7 billion in loans with the special servicer. This represents over 2,500 loans.