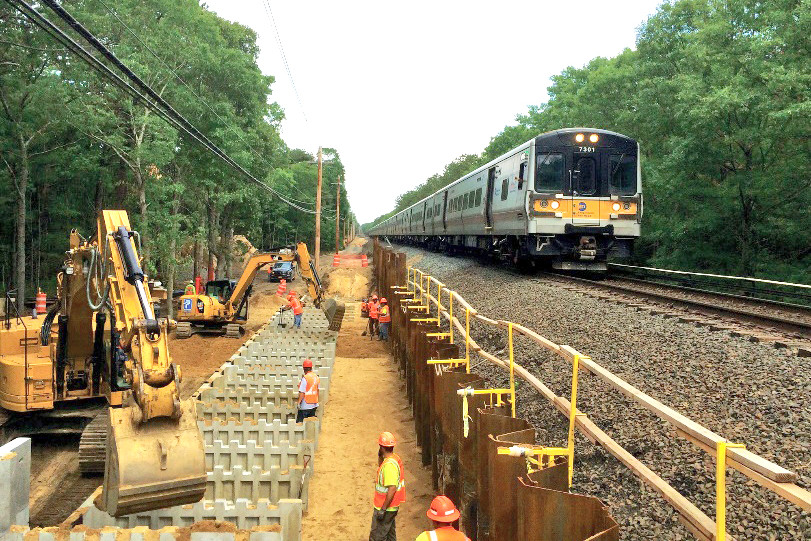 Adding a second track to the stretch of railroad will reduce delays on the LIRR and allow for increased off-peak service in both directions, ensuring more reliable service while reducing the risk of service disruption for the branch’s nearly 50,000 daily riders — more than double the ridership on the line from 25 years ago.
The Double Track project started in 2014 and was completed in three phases.

During the first two phases, Skanska was responsible for the installation of retaining walls to support the new second track and other fencing, the removal of existing tracks and sidings, and the construction of the new track bed and drainage system to accommodate the additional track.

This phase also included the installation of new signal systems and signal huts, upgraded power crossings, and other associated infrastructure.

In addition, Skanska was tasked to oversee the progress on the reconstruction of 14 LIRR stations throughout Long Island as part of the ongoing Enhanced Stations Initiative.

The Double Track project team utilized a design-build approach that, combined with the use of an innovative track construction machine that lays track more than 10 times faster than previous methods, allowed them to expedite the project schedule and deliver the upgrades both under budget and more than a year ahead of the original construction schedule.

During the second phase alone, Skanska’s project sequencing, design-build innovations, and integration of subcontractor schedules decreased the timeline from 21 to 17 months.

The 18-mile stretch of track was previously serviced by just one track, leading to significant delays in the event of a disruption.

The Skanska-Posillico II Joint Venture had an average of 30 construction and management employees on site each day.

With these upgrades, LIRR will be able to enhance off-peak service, with one train every 30 minutes in both directions – a significant improvement from the previous hourly service with a single track only.