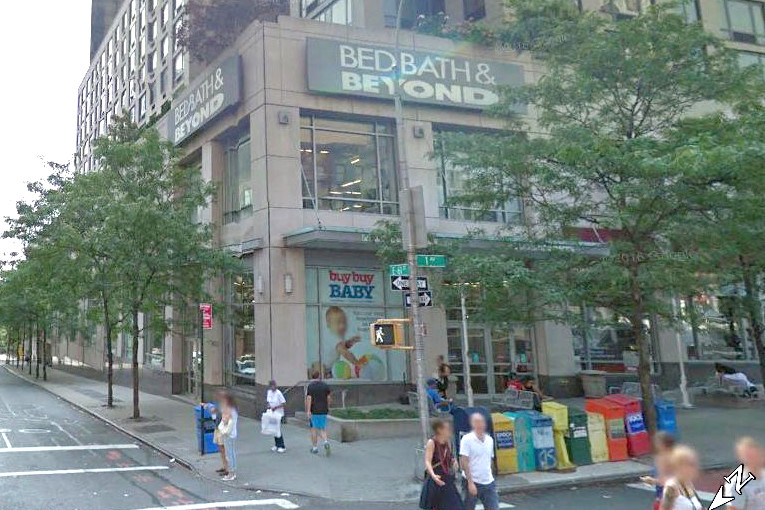 Gazit Horizons, the US subsidiary of Israeli shopping center giant Gazit-Globe has acquired its first asset in the New York market.
The company acquired a three-level, 92,000 s/f retail condominium on the Upper East Side, for $73.25 million, or just below $800 psf.
The property, located at 401 East 60th Street(pictured top)  along First Avenue, is 100 percent occupied by two tenants, Bed Bath & Beyond and Starbucks Coffee.
It was marketed for sale by the CBRE team of Darcy Stacom, Bill Shanahan, Ryan Spector and Carl Shorett on behalf of The Brodsky Organization, which developed the property along with an adjacent garage and residential units in 1999.
“We are excited to acquire our first Manhattan asset, in a neighborhood that we know very well,” said Jeff Mooallem, President & CEO of Gazit Horizons. “Bed Bath & Beyond and Starbucks are companies we have done business with for years, and their longstanding presence in this market was a significant component of the acquisition.
“In addition, we expect the property’s unique location adjacent to the [Queensborough] bridge and the demand for medical and commercial space along First Avenue will allow us to unlock additional value over time.”

Eric Silverstein has closed on the sale of one of the largest apartment buildings in his late’s father’s Bronx portfolio.
Meridian Investment Sales represented Silverstein in the $29.8 million sale of 1555 Grand Concourse in the Mount Eden neighborhood.
Meridian’s Mark Steinmetz and Richard Velotta also represented the buyer, Pistilli Realty Group.
The six-story 139,000 s/f building has 149 units. Built in 1927, it was recently upgraded with renovated elevators, a new intercom system, and a gas conversion is underway.
“As one of the largest properties in the Silverstein family’s multifamily portfolio, 1555 Grand Concourse is a great addition to Pistilli

Realty Group’s holdings in the Bronx,” said Velotta.
“As significant property owners in the Bronx, Pistilli Realty Group is well-positioned to manage this property by leveraging its existing talent and platform to maximize value and make 1555 Grand Concourse accretive to their portfolio from day one.”
The late Harry Silverstein had a portfolio of 14 buildings with 800 apartments in Brooklyn, Queens and the Bronx amassed as early as the 1960s.
According to The Real Deal, the family initially negotiated to sell the entire portfolio to A&E Real Estate Holdings for $275 million earlier this year .
When that deal stalled, they decided to sell it off piece-meal in a series of one-off deals.
TRD reported that investor Justin Lee is buying a 67-unit, 65,000 s/f property at 3971 Gouverneur Avenue for about $15 million.

A portfolio of three buildings in Carroll Gardens, Brooklyn has hit the market with an asking price of $21.5 million.
The properties, with the addresses 61, 63 and 65 3rd Place, are three adjacent multifamily buildings with eight units each. The 21,826 s/f assemblage contains 24 two-bedroom units.
According to TerraCRG, the brokerage firm that is exclusively marketing the portfolio, 23 of the apartments are market-rate. Only one apartment is rent-stabilized.

The market-rate units have an average rent of $3,996. The rent-stabilized unit, meanwhile, is renting for $1,297. TerraCRG said that the properties generate an annual income of $1,118,429.
Adam Hess, partner at TerraCRG, said, “This will give both local and institutional investors an opportunity to acquire bulk assets in a neighborhood where property seldom changes hands.”
Benchmark Real Estate bought the buildings for $12.7 million last year and spent $2.4 million on a gut renovation of the market-rate apartments.
It also paid an additional $500,000 for improvements to the site’s communal areas.

RBH Group has acquired a long-vacant commercial building at 370 Asylum St. in Hartford, for $20 million.
The company plans to redevelop the building into Teachers Corner Hartford, a mixed-use project with market-rate and affordable residential units, space for educational opportunities and cultural performances, as well as restaurant and retail components.
Teachers Corner Hartford represents the first transaction in RBH Group’s national rollout of its Teachers Village concept following the first Teachers Village project in Newark, NJ, a $150 million, 23-acre mixed-use community.
Teachers Corner Hartford is a realization of RBH Group’s continued joint venture with the Goldman Sachs Urban Investment Group and its partnering with Hartford’s Community Solutions and The Prudential Social Investment Group, with funding provided by the City of Hartford and various Connecticut state agencies.
Laurie Grasso and Douglas Hoffmann of Hunton & Williams advised in the acquisition.
“Teachers Corner Hartford represents a unique public-private partnership that will transform an underutilized urban area into a vibrant and important hub of activity,” said Grasso.

John Stewart, James O’Leary and Dylan Torey in Manhattan, along with David Thurston of the firm’s New Jersey office, represented the seller, a private investor and secured the buyer, HUBB NYC.
“A sale price over $1,000 per square foot is a strong price for mixed-use, avenue buildings in the East Village,” said O’Leary. “Below market rents and strong residential rental demand will allow the buyer to add value to this property quickly.”
“East Village is sustaining prices above $1,000 per square foot. We believe this is due to strong apartment and retail rental demand. This property allows the new owner to convert large one-bedroom apartments into potential two-bedroom apartments making the units more appealing to the target market,” added Thurston.
The two adjacent five-story walk-up apartment buildings, located between 7th Street and St. Marks Place in the East Village contain 16 one-bedroom apartments and three ground floor commercial units. The property has maintained continuous ‘Mom and Pop’ ownership since the 1970s.

Florida-base Sterling Organization has bought Huntington Square Plaza, a grocery-anchored shopping center on Long Island.
Located at 3124-3126 East Jericho Turnpike in East Northport, the asset was purchased on behalf of Sterling Organization’s institutional core fund, Sterling United Properties I, LP, for an undisclosed amount.
The seller was Shopcore Properties, formerly Excel Trust, which sold the 116,221 s/f shopping center for just north of $40 million, according to sources.
Built in 2002, Huntington Square Plaza is 100 percent occupied and anchored by Stop & Shop and Best Buy.
“We are excited to have had the opportunity to make this investment, which is our first on Long Island. Huntington Square Plaza is anchored by two solidly performing retailers on long term leases, characteristics that fit the investment profile for SUP I,” said Ed Senenman, senior managing director of Investments and Portfolio Management for Sterling Organization.
The property is Palm Beach-based Sterling’s second acquisition in the New York City MSA.
Holliday Fenoglio Fowler marketed the property on behalf of the seller, with a team that included Jose Cruz, Kevin O’Hearn, Stephen Simonelli and Michael Oliver.

Meadows, Cambridge partner to bring quiet to the modern workplace