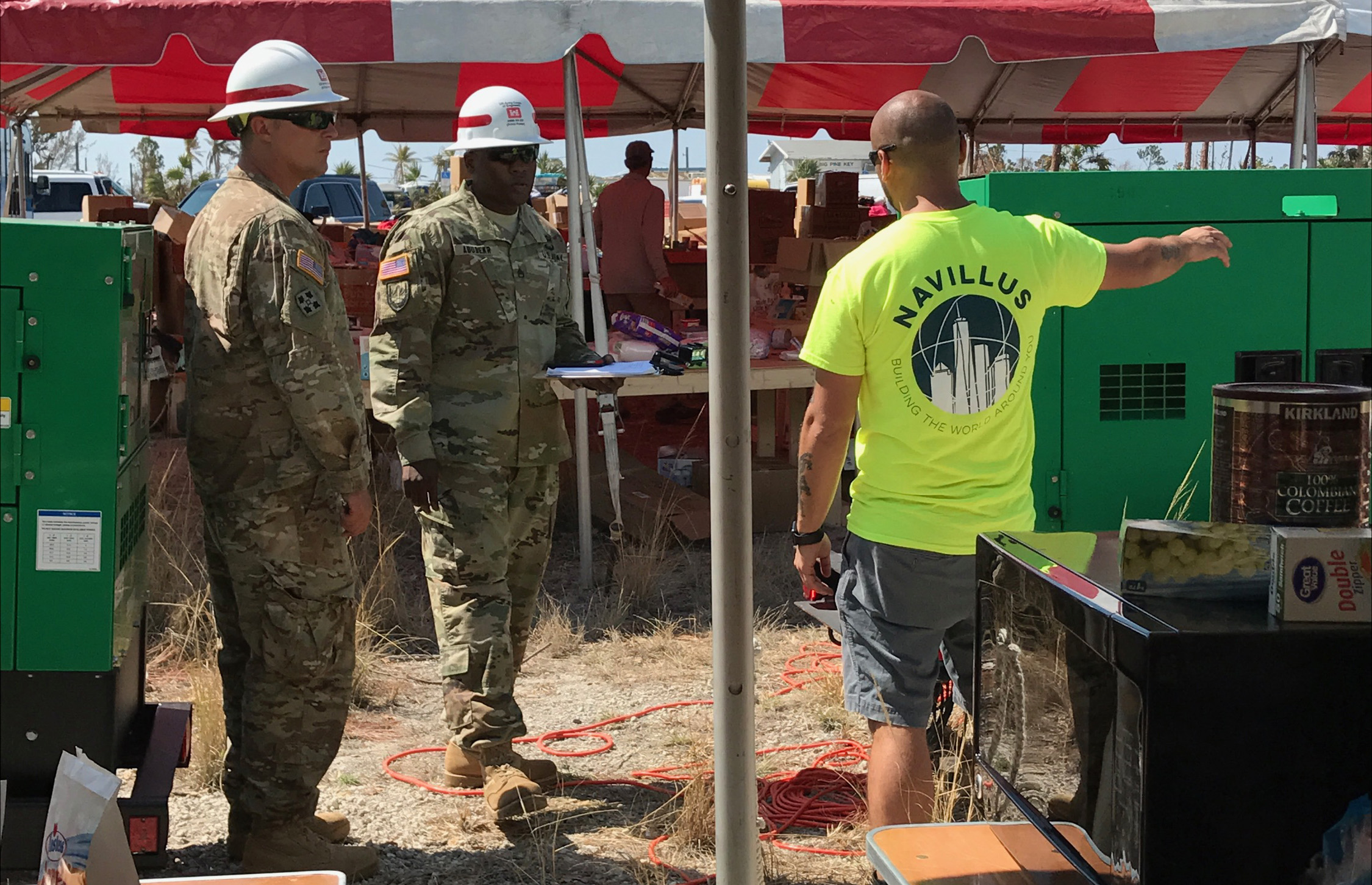 From a helicopter view, natural disasters can appear divisive, with scarcity leading to a mad scramble for resources, desperation and, as has been displayed in the aftermath of Hurricane Maria in Puerto Rico, political strife.

However, those who witness the fallout on the ground level often find the opposite to be true as communities rally together around a common cause and outsiders lend helping hands; outsiders such as Navillus Contracting.

As it did in southern Queens after Hurricane Sandy in 2012, the New York construction firm played an integral role in recovery efforts in the Florida Keys after Hurricane Irma thrashed the islands.

“When human tragedy happens like this, it really brings people close,” O’Sullivan said. “You take the time to know people, you take the time to sit down with someone who’s lost everything and get to know them and that on its own is really amazing.”
Navillus was among the first groups to reach the Keys following Irma, landing just days after the storm ran its course and remaining in the area for two and a half weeks before packing up its makeshift camp on Friday.

Traveling in teams of 10 to 12, Navillus workers distributed hot meals, clean water and other essentials to victims and began the process of clearing away debris left in the storm’s wake.

After working 14-hour shifts for four or five days straight, the volunteers were sometimes reluctant to give way to the next platoon, O’Sullivan said. “The volunteers are great,” he said. “A lot of times they don’t want to leave.”

Just as important as the workforce was the large tent they brought with them. As it had done at a park on the corner of Beach 129th Street and Rockaway Beach Boulevard in 2012, Navillus raised a 150- by 50-foot tent on the grounds of the Big Pine Key Flea Market, turning it into a point of distribution and a joint operating base for the various organizations serving the area.

Aaron Titus, director of Crisis Cleanup, an online network that helps facilitate recovery efforts in distressed areas, said it’s crucial to have a shared space where people can come together and frequently they are established by private entities who able to establish them quicker than government agencies.

“Communities have to lead their own recoveries and they do; it has to happen that way,” he said. “Companies like Navillus can come in and help, and often they do faster than the government because they don’t need to wait for a declaration or instruction, they can simply act.”

Monroe County Mayor George Neugent, who governs the Keys, said he was struck by the proficiency Navillus displayed on the scene.

“Since the time that I saw them come in and set up their point of distribution, I was amazed at how efficient and sustainable they were in doing things on their own,” Neugent said.

“Obviously, they’ve worked other tragic events in the past, so they have experience, but I was impressed, especially since they were doing it on their own dime.”

Indeed, O’Sullivan said he learned quite a bit from previous experiences, but the most important lesson was to never wait for instruction.

A native Irishman who now calls Queens home, O’Sullivan first heard the call to help on September 11, after the attacks on the World Trade Center.

“I was down there that morning, it was horrific what was going on down there,” he recalled. “We offered help, but we didn’t do anything. We offered machines, people, we went to the Jacob Javits Center and we expected someone to tell us what to do, but no one did, because no one knew what to do.”

Waiting for directions is the worst thing someone can do after a catastrophic event, Titus said, because, for the most part, there isn’t a specific plan in place or a person calling the shots. Even if there were, odds are that person won’t be accessible.

“By definition, disasters are overwhelming,” he said. “If it wasn’t overwhelming they would call it an inconvenience, not a disaster.”

When disaster struck his hometown again in the form of Hurricane Sandy, O’Sullivan didn’t wait for instruction. He took to the streets of Rockaway and found what appeared to be a war zone, with deserted blocks left powerless and in ruin. His team stayed on site for the next four months, even serving Thanksgiving dinner beneath the tent.
Ruined homes were easier to clear in Florida, but without them the region faces a major housing shortage, Neugent said, meaning ample construction opportunities lie ahead.

However, O’Sullivan said his company won’t be on those jobs.
Aside from the fact that his firm focuses on commercial projects rather than residential, he said he didn’t volunteer to turn a profit.

Along with aid from Navillus and other groups, the Keys also saw an influx of donations, some of which were delivered in U-Haul trucks by people who live several states away. At times, the supply of goods exceeded the demand and ability to distribute them, Neugent said.

At one point, “diapers were a rare commodity and cleaning products were like gold,” Sarah Fitzpatrick, the Florida-based volunteer who ran point at the Navillus camp, said. But, by the end, she was packing excess supplies and shipping them to next crisis zone in Puerto Rico.

Navillus’s excess supplies are still being shipped to Puerto Rico on a weekly basis, arriving alongside other volunteers from organizations such as the AFL-CIO, New York’s Construction and General Building Laborers’ Local 79 and others.

It’s not uncommon for disaster sites to receive a surplus of individual donations, Titus said, adding that it is common for those goods to end up in landfills or clogging valuable port space. He said this will likely happen in Puerto Rico, where infrastructure was crumbling well before Hurricane Maria hit.

“That’s when Puerto Rico needs your help, when everyone else has forgotten about them.”

In the short term, Titus said the best contribution is money donated to reputable relief funds, which can acquire bulk goods at discounted price and provide direct service to people in need. Another New York development company is doing just that.

The Stagg Group, an affordable housing specialist in the Bronx and Westchester County, will donate $10,000 in cash and $5,000 in building materials to the Acacia Network’s Ayuda Puerto Rico fund, which will use the money to clear roads, distribute health care and assist at-risk populations.

“The tragic situation in Puerto Rico demands that we all pull together and do what we can to help those severely affected by this terrible disaster,” Stagg Group President Mark Stagg said. “We are proud to contribute to the relief effort as well as provide much-needed construction supplies.”