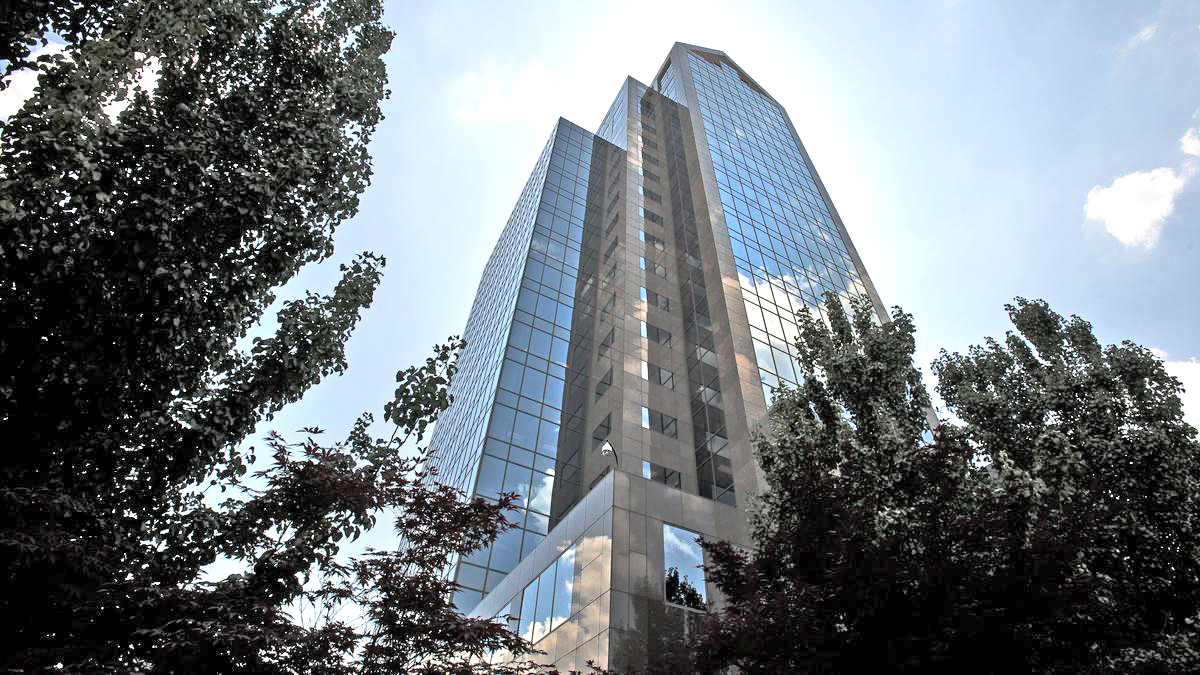 Improvements earned the Energy Star designation for the property and in 2011, the property was named Louisville’s “Most Efficient Building” by the Louisville Energy Alliance.

“Class A office towers in select central business districts have always been a key component of HGI’s acquisition strategy,” said T. Richard Litton, President of HGI, “We are pleased with the performance of the property and the timing of our exit.”

The property is currently 94 percent leased. Completed in 1989 as the headquarters for Louisville Gas & Electric Company the stunning granite-clad, 287,990-square-foot, 23-story office tower is centrally located at the corner of Main and Third Streets, adjacent to the Kentucky International Convention Center. Offering dramatic views of downtown Louisville and the Ohio River, the building is conveniently located near highways I-64 and I-71,and approximately 15 minutes from the international airport. Among its numerous amenities are a 465-space, seven-story parking garage adjacent to the building, and linked by a covered walkway that also provides access to entertainment centers, sporting venues, and riverfront parks. The building plaza also features flower gardens, shade trees and an on-site restaurant.

Park Slope multifamily building up for grabs in Brooklyn

GFI Realty Services, Inc. announced that it has been named the exclusive sales agent for 477 3rd Street, a multifamily building located on a beautiful tree-lined block in the Park Slope section of Brooklyn, New York. GFI Realty Senior Director of Investment Sales Erik Yankelovich will oversee the marketing of the property, with pricing targeted at $12 million.

The 20-unit apartment building is located in prime Park Slope, in the heart of one of the city’s most desirable neighborhoods. The fully occupied walkup contains various amenities, including an on-site laundry room. The property received a J-51 tax incentive, which will expire in 2017. At that time, many of the apartments will become market-rate as per in-place lease riders, which will raise the property’s revenues.

“Well-located within Park Slope, this building is ideal for investors seeking a multifamily property with strong existing returns and a lot of upside due to below market average rents,” said Yankelovich. “477 3rd Street is just blocks from Prospect Park, and we’re confident that our long list of contacts will offer numerous strong bids for the property.”

The five-story apartment building consists primarily of one- and two-bedroom units. It is located between 6th and 7th avenues on 3rd Street, and is proximate to several retail and transit options.

“The buyer is capitalizing on the strength of the overall market and the popularity of Park Slope,” said Yankelovich. “He intends to transition his real estate capital to other up-and-coming neighborhoods. As a result, he decided to put this asset on the market.”

The north Brooklyn neighborhood of Park Slope is one of the most desirable in the borough, and has proven particularly attractive to young professionals in recent years.

“This exclusive assignment is a testament to the confidence that Brooklyn building owners have in our ability to find buyers for their properties,” said GFI President Michael Weiser. “Our team of brokers is actively marketing many properties and development sites across Brooklyn and the rest of New York City, and owners looking to monetize their real estate assets know that we have the personal relationships with investors to provide them with real value.”

CBRE Group has been tapped as the exclusive sales and marketing agent for The Cedarbrook Club, a private country club at 32 Oak Lane in Long Island’s prestigious Gold Coast neighborhood of Old Brookville.  Philip Heilpern, Martin Lomazow, and Dorothy Chung of CBRE’s Long Island operations will oversee the campaign on behalf of the ownership, Old Cedar Development Corporation.

“We are thrilled to work with Old Cedar Development Corporation on such a unique opportunity. It’s extremely rare that such a large parcel of land, especially on the North Shore, becomes available, and it has already attracted a lot of attention,” said Martin Lomazow of CBRE. “While primarily zoned for residential development, the site is also well suited for several other uses, providing prospective buyers with numerous options.”

The Cedarbrook Club, zoned under the Incorporated Village of Old Brookville, is designated R-3A residential, which allows for the development of single-family homes on three-acre lots. The site has limited slope and topography, resulting in lower development cost and environmental impact. An added benefit of the site is its location within the North Shore School District, one of the top on the Island. The property is also ideal for investment, corporate, or individual use.

The property on Oak Lane has a number of access points, including Chicken Valley Road, Piping Rock Road, and Cedar Swamp Road, and is approximately a mile away from Northern Boulevard and Route 107, two major Long Island thoroughfares.

“This is an extremely promising project with substantial value-add potential,” said Jumani. “It is a hybrid building, with a one story flex/office portion housing existing tenants Tyco, RDD and Passaic County, facing on Taft Rd and a two story mixed use section facing on highly travelled Riverview Drive at its own traffic light.

Tulfra is planning a program of more than $5 million of improvements for the company’s latest acquisition, which consists of the 105,000-square-foot, two-story mixed use portion, fronting on Riverview Drive, and a 120,000-square-foot section facing on Taft Rd.

The Riverview space will be retrofitted to attract technical, quasi-retail and recreational tenants,” said Jumani. “The 65,000 sf first floor encompasses four units of 15-20,000 square feet each.  Options for those spaces include everything from child and adult day care, to a gym or fitness center, kids’ amusements, and other retail-type recreational uses.

“The 40,000-square-foot second floor is ideal for training, trade and polytechnic schools, an art gallery, or mini-storage,” he said.

Constructed in 1962 and redeveloped in 1998, Totowa Business Center is situated at the busy intersection of I-80 and Routes 46 and 23. The 17.38-acre site, which offers more than 800 parking spaces, is just 17 miles west of Manhattan, near the region’s other major business districts, a deep labor pool, upper income residential communities and one of the nation’s busiest ports.

“This marketplace is supply-constrained for this type of asset,” said Jumani. “As we proceed with the planned improvements, we anticipate a great deal of interest in the available space.”

New Jersey office space up for lease or $4.2 million sale

Mayor’s DOB reforms are a wise investment for NYC