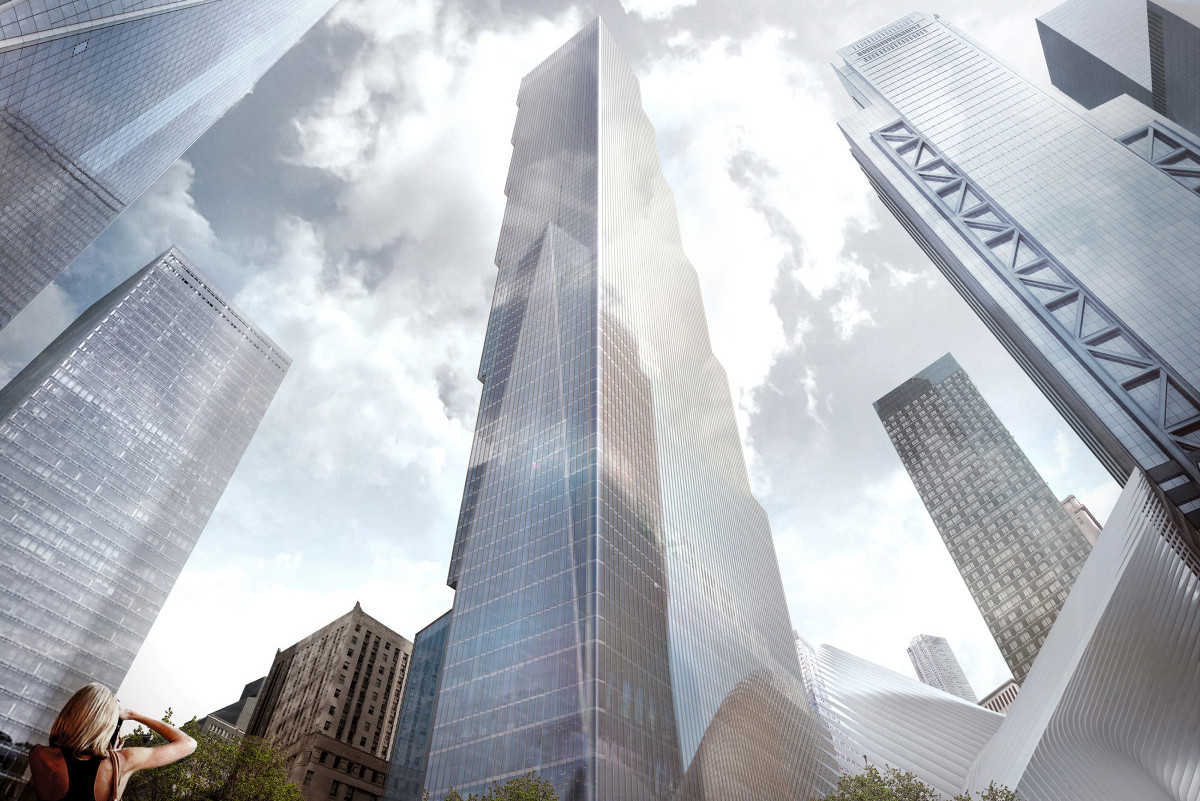 Last week, 21st Century Fox and News Corp announced that they have reached a non-binding agreement with Silverstein Properties (SPI) to locate each Company’s corporate headquarters at a new building to be developed by SPI at 200 Greenwich Street/2 World Trade Center and yesterday the first look at what that new project may look like was granted.

“The completion of the World Trade Center will restore the majestic skyline of Manhattan and unite the streetscapes of TriBeCa with the towers Downtown,” said Ingels. “To complete this urban reunification we propose a tower that will feel equally at home in TriBeCa and the World Trade Center. From TriBeCa, the home of lofts and roof gardens, it will appear like a vertical village of singular buildings stacked on top of each other to create parks and plazas in the sky. From the World Trade Center, the individual towers will appear unified, completing the colonnade of towers framing the 9/11 Memorial. Horizontal meets vertical. Diversity becomes unity.”

According to a joint statement from 21st Century Fox and News Corp, Ingels’ tower will house studios, newsrooms and teams from across both Companies’ businesses.

The new headquarters would provide 21st Century Fox and News Corp with a range of efficiencies as well as the flexibility for future growth,while helping cement Lower Manhattan as a dynamic new hub for media.

“This is a great milestone in the historic effort to rebuild the World Trade Center,” said chairman of Silverstein properties, Larry A. Silverstein.“2 World Trade Center is the final tower planned for the 16-acre site, and when it is done, the Lower Manhattan skyline will be fully and beautifully restored.  For all New Yorkers who never gave up on Downtown, this makes good on our pledge to see the rebuilding through, and gives me a tremendous sense of pride.

“A decision by 21st Century Fox and News Corp to move to the new World Trade Center would cap a seismic shift that has taken place in Lower Manhattan over the past decade,” Silverstein continued. “

This isn’t your grandfather’s Wall Street. While still the international capital of finance, Lower Manhattan has also remade itself into the new media and entertainment capital of America. The area south of Chambers Street now boasts over 800 TAMI (Technology, Advertising, Media, Information) companies, ranging from scores of smaller, ambitious tech start-ups to media companies like Time Inc., Condé Nast and HarperCollins to cutting edge advertising and branding firms like Droga5, Group M and MediaMath.”

Silverstein also pointed to the changing landscape of lower Manhattan while commenting on the new addition to the rebuilt World Trade Center.

“Downtown has also been transformed into the country’s most dynamic live-work urban community – home to over 60,000 people, some of the best schools, parks, shops and tourist attractions in the City.”