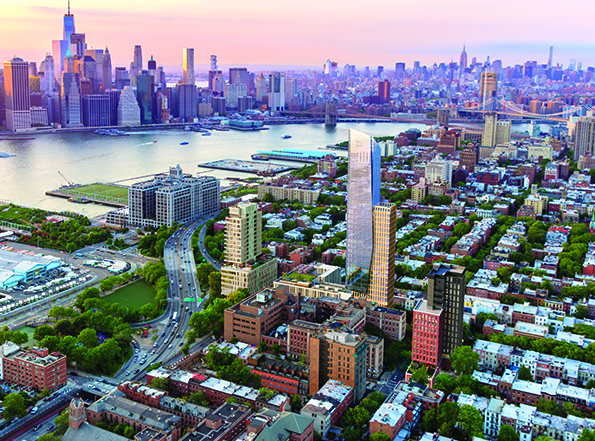 Fortis Property Group has launched the second phase of the River Park master plan, a billion-dollar transformation of the former Long Island College Hospital site, one of the largest transformations since the unveiling of Hudson Yards.

“More than just a residential destination, it is an entirely new neighborhood that will form an iconic element of the Brooklyn skyline. River Park will bring an international private K-12 school and a state-of-the-art medical facility built and operated by New York University Langone Health to Cobble Hill.”

Within the second phase are the first three new towers, 1 River Park, 2 River Park and 5 River Park. This comes on the heels of the nearly complete sellout of phase one, which included the Polhemus Residences and Townhouses, now over 80 percent sold.

5 River Park features contextual design by Douglas Romines and houses 25 residences ranging from one to four bedrooms priced from $1.15 million to over $7 million. Amenities include a children’s jungle-themed playroom and outdoor playground with a tunnel and drawbridge; a game room, acoustically engineered music studio, package room and bicycle storage

Fredrik Eklund of the Eklund-Gomes Team of Douglas Elliman, along with John Gomes, Alex Maroni and Erin Lichy, is leading sales.

2 River Park will enter the market later this year and will feature a tower designed by Hill West. Located on the northwest corner of Hicks Street and Pacific Street, the property will comprise of one- to four-bedroom homes. 1 River Park, located on the southwest corner of Atlantic Avenue and Hicks Street, is expected to come to market in early 2019 and will studio to three-bedroom homes designed by FXCollaborative.

3 River Park and 4 River Park, the final two buildings within the master planned development, will launch as phase three. Sales for this final phase are expected to commence in 2020-21.