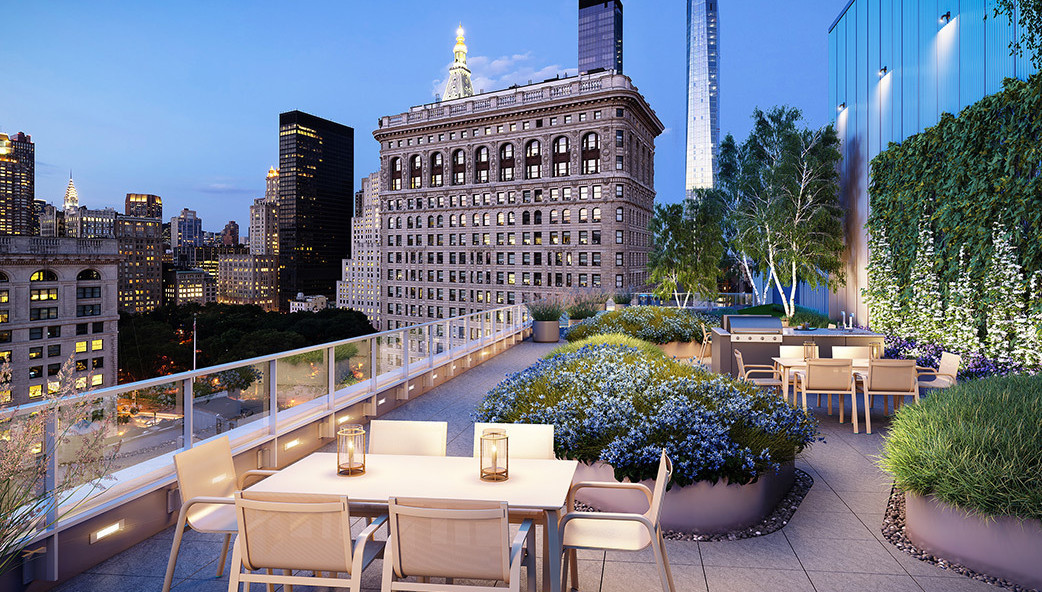 Just over a year ago, 7 West 21st Street was a block-through parking lot in the middle of the bustling Flatiron District. Today, the address is the site of a luxury rental complex with two buildings that share an interior courtyard atrium.

7W21 was developed by Friedland Properties and designed by architect Morris Adjmi. Managed by Rose Associates, the 18-story, 289-unit building is one of the few new development rental buildings in the Flatiron neighborhood, and the development team is hoping to capitalize on the demand.

Though there are several new development condo buildings rising in the area, including Ian Bruce Eichner’s 45 East 22nd Street tower and the Amirian Group’s Twenty1, there are virtually no new development rentals.

“We think of this as our hidden oasis in the Flatiron,” said Andrea Mignone, director of property marketing at Rose Associates. 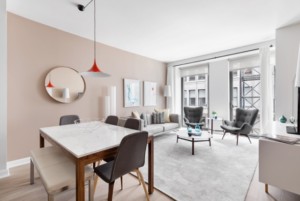 Located between 5th and 6th Avenues, the building is surrounded by big-name retailers in fashion and design, and has the benefit of close proximity to several different subway lines.

Bathroom design giant Kohler will occupy the 3,000 s/f retail portion at the base of the building.

The in-house team at Rose Associates launched leasing in mid-October and, after just three weeks, they had already signed 15 leases in the building. “We got a lot of interest from people in the neighborhood,” said Mignone. “It’s a beautiful building in an amazing neighborhood.”

The units range from studios to two bedrooms, and all apartments come with the same appliances and finishes. Kitchens have quartz countertops and Fisher Paykel and GE appliances, while bathrooms feature Kohler fixtures and floating vanities. 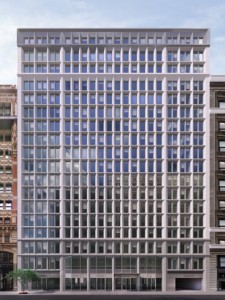 The building also offers an underground parking garage and bike storage, and has a partnership with Spot Canine Club, a service that picks up and drops off dogs at daycare during the day.

The 80/20 rental building features touches like a “transit screen” in the lobby that gives residents a streamlined look at the status of nearby subway lines and other public transit in real time, and a separate package room.

“We’re seeing a lot of traffic without doing any crazy events right now, which we’re excited about,” said Mignone. The team expects the amenities to be fully completed by January. 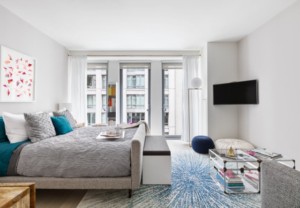 The building is among the many rental buildings that Rose Associates has in its portfolio. When it came to deciding what kind of amenities to include, Mignone and her team looked at feedback from resident surveys that the frequently send out.

“We take a lot of time interacting with residents about what kinds of amenities they want,” said Mignone.

Along with the surveys they send out, they have also held focus groups and asked for feedback on site in building amenity spaces.

Residentsʼ most popular requests were for private space to hold a business meeting within the building, yoga classes, and BBQ grills in outdoor spaces.

“This property has so many fantastic spaces that renters can discover and interact with, from the chic modern interiors to the varied outdoor areas, including the sunken garden, the rooftop and the expansive landscaped courtyard,” said Amy Rose, co-president of Rose Associates, in a press release.