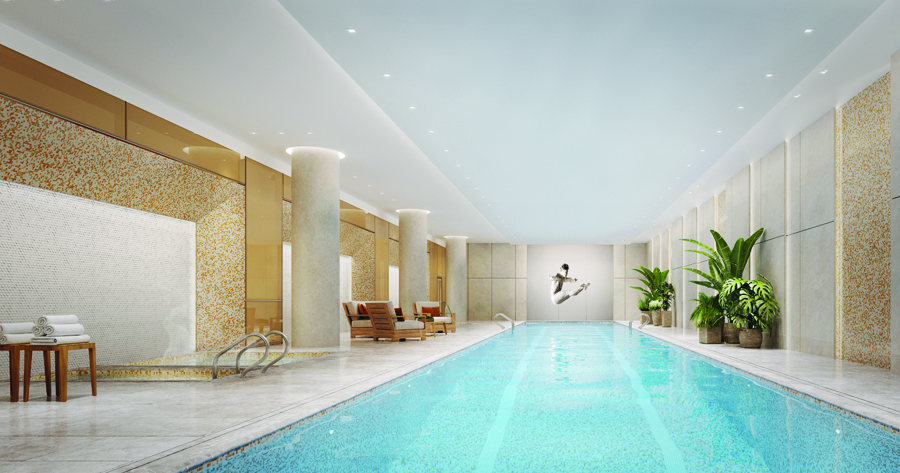 If Richie Rich were in the market for a Manhattan rental, One Hudson Yards would be right in his wheelhouse.

With a basketball court, full-length swimming pool and a game room complete with its own bowling alley all on site, the fictional character would feel right at home in this 33-story Midtown West high-rise.

He’d even have access to a day spa for his dog, Dollar.

Crafted by architect David Brody Bond with interior design work from Andre Kikoski, One Hudson Yards is being developed and constructed by Related Companies on the periphery of its ambitious redevelopment project on the Far West Side.

Amenities abound in this luxury apartment building at 530 West 30th Street, which straddles the border between two of Manhattan’s hottest neighborhoods: Chelsea and the burgeoning Hudson Yards area, for which it is named.

In addition to the recreational offerings on the mezzanine level, residents also have access to a spa area with sauna, steam room, salt pool and hot tub; a children’s play area; a common space with meditation room as well as a row of Apple iMacs and free Wi-Fi plus access to an Equinox fitness center inside the neighboring Abington House development at 500 West 30th Street, which is connected by a subterranean tunnel system.

Although some of the more lavish features are still being finished, the 367 ft. tall tower is nearly half rented, Chris Schmidt, senior vice president of Related rentals, said.

So far, most of the tenants have come from elsewhere in the city, but Schmidt said the offerings in and around One Hudson Yards are appealing to all types of renters, including those coming from suburban locales.

“Amenities are what draw them in because they’re the things that are not typically available to them in their [present] homes,” he said.

“When they realize how much time they save by not having to drive to the gym or to go shopping, it becomes very appealing. It’s a whole lifestyle change that a lot of people are moving toward.”

Another convenience that has appealed to Related’s tenants, Schmidt said, is the Dog City pet care facilities that are offered on-site, or in close proximity to several of their buildings.

Dog owners can take their pets to these facilities for grooming, training and day care services. If someone is stuck working late, they can even arrange to have a Dog City employee feed or walk their pooch.

One Hudson Yards does not have its own Dog City, but residents have access to the location inside Abington House. Other offerings include a turndown service, a doorman, 24-hour concierge and a climate controlled delivery room.

Along with the staff in the lobby, residents are greeted by a large, shimmering ceiling installation and a lounge area with a clear coffee table filled with gold-flecked leafs — that’s real gold on real leaves.  Gold is a common theme throughout the Kikoski interior. “Having him part of a rental building is unique and his pride is shown throughout the property,” Schmidt said. “It’s for those who value high design, you have to value that kind of stuff, but that’s part of why we’ve been so successful so far.”

Ranging from one-bedroom, one-bathroom units, which start at $5,085 per month, to four-bedroom, three-bathroom, which start at $24,500 a month, apartments in One Hudson Yards come outfitted with Turkish marble counter tops and a suite of Miele appliances, which includes a steamer rather than a microwave — something Schmidt attributes to the property’s focus on overall wellness.

Ceilings are tall and window space is ample, offering views of the High Line, Lower Manhattan, Midtown or New Jersey, depending on the location in the building.

While the sharp angle of the east side of the building creates an awkward floor plan for some of the larger units, Related makes good use of the space as a well-lit sitting nook.

Outside the confines of the building, be it on the fifth floor terrace to sunbathe or barbeque, or on the ground level for a stroll to the Chelsea High Line or across the Public Square and Gardens promenade, residents are engulfed by towering buildings that have sprouted on top of the rail yards that once served the city’s industrial corridor, warehouses that have been converted into luxury condos and functional art pieces, such as the Vessel, a winding, honeycomb-like walkway with 154 interconnecting flights of stairs and 80 landings to take in the various views of the city.

Related began leasing One Hudson Yard’s 178 units during the summer and it expects to have the final stages of construction done by early next year, Schmidt said, with the remainder of the Hudson Yards developments wrapping up in 2019.