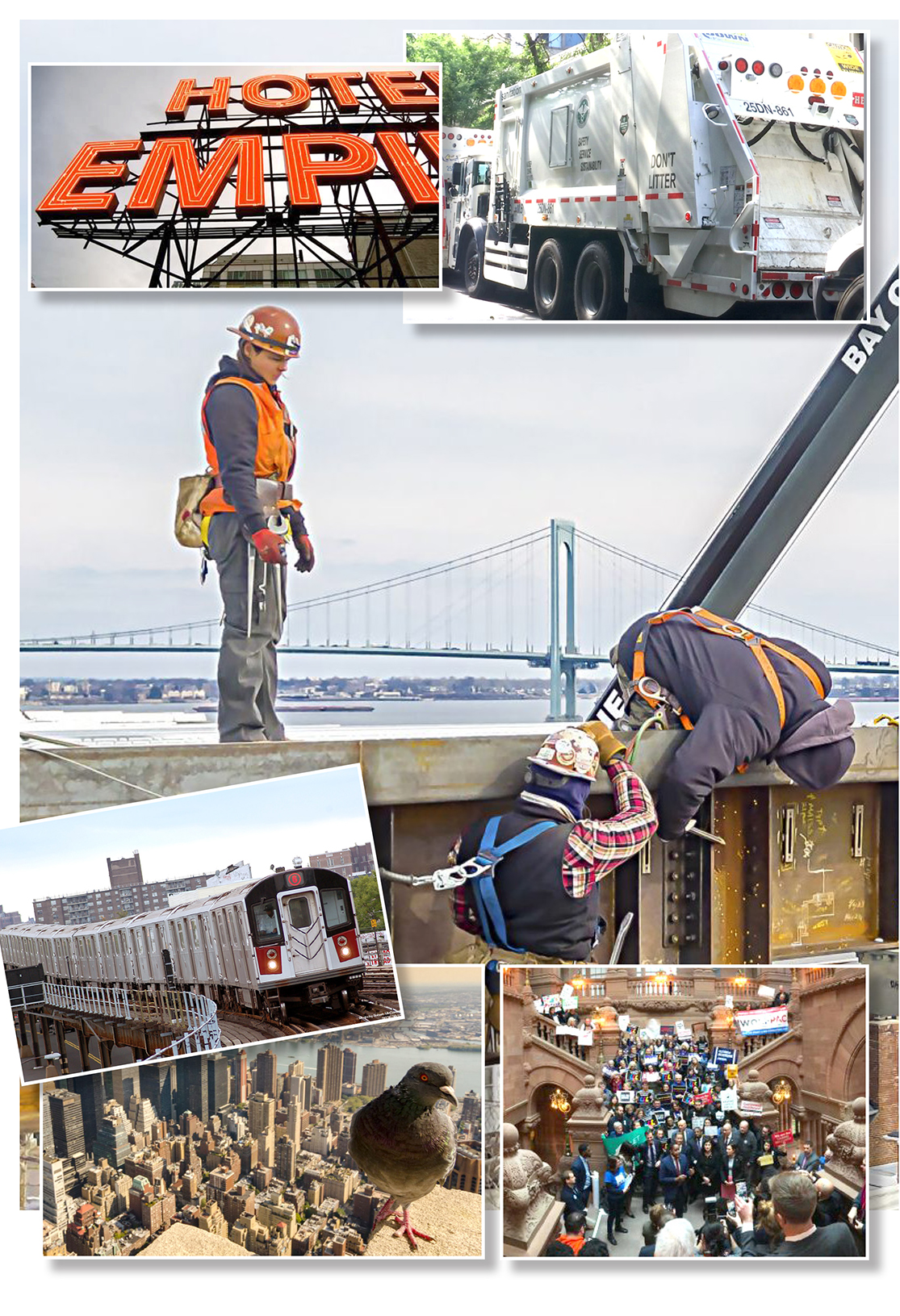 Throughout 2019, REBNY educated policymakers and the broader New York public about misguided City Council proposals to impose commercial rent control on the city’s commercial real estate market, as well an idea by the Mayor to implement a vacancy tax.

REBNY strongly opposes two commercial rent control bills and is leading a coalition of business leaders, home owners, and other stakeholders against its passage.

Our fact-based advocacy and data driven approach continues to demonstrate that many narratives around commercial vacancies simply lack merit.

Driven by our commercial broker members, REBNY helped to move the needle in the public sphere and successfully halted the legislation from advancing beyond its initial stages.

REBNY will continue to advance these efforts in 2020 and beyond.

The City Council introduced several bills regarding commercial tenancy, and REBNY played an active role in shaping the public conversation in each of those cases.

The first of these was Intro. 1472, which requires owners to provide more information to the City regarding their ground and second fl oor retail spaces. This will be a useful public policy tool. Robust data collection helps inform the public and leads to more productive conversations in the future, separating serious policy proposals from spurious ones.

REBNY applauds the Council for its work on this bill.

REBNY also supported Commercial Tenant Harassment legislation that imposes steeper penalties against the harassment of tenants in commercial buildings. The bill will, in other words, punish those actors who are guilty of harassment.

That is good news for all New Yorkers. We again applaud the Council for taking action here, and for listening to our concerns over previous iterations of the bill.

REBNY supported a thoughtful plan to reform New York City’s Commercial Waste franchising system. Our successful advocacy helped to lead to the passage of legislation that addresses several environmental and safety goals while also ensuring that all businesses will have the ability to choose from multiple carting companies.

REBNY has provided critical input during the legislative process to ensure that the fi nal legislation best achieves these goals.

We were pleased that the enacted legislation will continue to allow businesses to select among multiple carting companies. What’s more, we successfully worked to provide building owners who utilize containerized systems with greater choice in their carting company.

As this law is implemented in the years ahead we will play an active role ensuring that businesses receive high-quality customer service.

The two groups jointly created two sub-committees that will effectuate those goals.

The first, a Development Sub-Committee, will focus on creating policies that impact overall development, employment, standards of living, and diversity.

The second, the Legislative Group Sub-Committee, will identify ways to harmonize political and legislative objectives between the two groups and seek additional avenues to jointly consider new laws or regulations in areas of mutual interest.

This new agreement marks a turning point in the relationship between the private sector and organized labor.

By working closely together, as both parties share the goal of stimulating new development in the fi ve boroughs, REBNY and BCTC will help build an even brighter future for New York City.

In 2019, REBNY again led the way on matters of environmental importance by working to create a more sustainable New York.

We remain committed to helping the City and State reach our shared goals of building a cleaner, greener New York.

Our Sustainability Committee, comprised of many of our leading members, spent 18 months across 2018 and 2019 studying the various ways in which the City and our industry could work together to improve building emissions to meet these goals.

Our insight and research on this matter will contribute to City policy for years to come.

In April, the City Council approved legislation to reduce greenhouse gas emissions for buildings. However, the legislation exempts the vast majority of the city’s built environment from its requirements and imposes restrictions on certain buildings that will discourage density and reward buildings that accommodate less people. Over time, the law will penalize owners who lease space to industries such as technology, media and finance, making it harder for those industries to grow and thrive.

As work on this vital issue moves forward, it will be critical that all levels of government – City, State and Federal – be coordinated with the private sector to collectively achieve our shared objectives.

REBNY advocated against an effort to restrict the mechanical spaces needed to develop tall buildings, which would reduce or eliminate middle-class construction jobs, reduce development, and hurt our overall economy.

The City and State are considering proposals to limit the size of mechanical spaces in large buildings. Mechanical spaces house the equipment that is required to run a building. These spaces are a critically important factor in making buildings more livable and environmentally sustainable.

We conducted several building tours with elected officials and advocacy organizations to educate policymakers about the need to allow space for mechanical equipment.

In October, the City Council introduced new legislation that would negatively impact construction and development by limiting the hours for construction activity.

The bill would restrict the applicable hours and restrict the number of days a week for which an applicant can perform construction work.

REBNY opposes this bill and is working alongside various stakeholders, including the Building and Construction Trades Council of New York, to meet with and educate elected officials about the need for such variances to complete vital construction projects on time.

Last year, City Planning, Manhattan Borough President Gale Brewer, and Councilmember Margaret Chin kicked off a public engagement process to rezone SoHo/NoHo. Like the process to rezone East Midtown and the Garment District, an advisory group of stakeholders worked over the course of a year to develop recommendations to rezone SoHo. REBNY participated as an advisory group member. As an Advisory Group member, REBNY pushed for zoning changes that bring some rationality and predictability to the district —specifically changes to allow for as-of-right commercial and retail uses.

The advisory group’s preliminary report was released at the end of 2019 to potentially shape the first rezoning of the two neighborhoods in 50 years. We hope that this is the start of a productive process moving into 2020.

A proposed zoning change would require a special permit for the construction of new hotels subject to the approval of the City Council. The de Blasio administration is currently studying the proposed policy, which would make hotel development one of the most restricted processes in the five boroughs.

Restricting the development of hotels, at a time when New York’s tourism industry is booming, would restrict our economic growth.

REBNY will work with other stakeholders to promote fact-based policies that help New York’s tourism industry continue to thrive in 2020 and beyond.

REBNY supports the City’s goal of achieving a building environment that is more friendly to birds and reducing bird collision, and related deaths, below the tree canopy.

Throughout 2019, we have worked with the City Council to promote a science- and data-based approach to the implementation of any new regulations and legislation.

We supported, for example, legislation that passed the New York State Legislature that would create an advisory council of relevant interest groups and experts on the best practices related to birdfriendly design and construction.

While the Governor ultimately vetoed this bill, the Council moved ahead and the city will lead in establishing design standards in this policy area. We thank the City Council for addressing logistical concerns, inconsistencies with zoning and building code, and ensuring enough time for the development of guidance for implementation of this new rule.

We look forward to collaborating with AIA and the Department of Buildings to frame practical guidance and helping make New York City as bird-friendly as possible.

REBNY successfully sought changes to a law intended by the City Council to serve as a data-driven tool for anti-harassment enforcement and measures.

The law tasked the City of New York Department of Housing Preservation and Development (HPD) to identify those buildings in which tenants may be at a greater risk for harassment.

REBNY worked with HPD to update its “Speculation Watch List” which erroneously captured some buildings and included other properties that did not meet the criteria to appear on the list.

Through the rulemaking process, REBNY successfully argued for changes to ensure that certain properties be excluded so that the list is appropriately focused in the future.

REBNY played a leadership role working with a coalition of business, environmental, transportation, and labor groups that successfully advocated for a toll on vehicles that enter Manhattan south of 60th Street.

Revenue generated by congestion pricing will help to improve subway service, increase vehicle speeds, and reduce pollution. The inclusion of the provision in the State Budget was a major step forward for New York. Our economy requires reliable transit networks in order to grow and thrive.

The fee will be implemented starting in 2021, although significant details regarding the program and its implementation must be worked out.

In 2019, the Governor and State Legislature enacted changes to rent laws intended to enhance protections for tenants. Unfortunately, the changes did not directly address the City’s affordable housing crisis. They did not ease vacancy rates or create a single new affordable unit.

We are deeply concerned that the new rent laws will lead to deteriorating housing conditions and discourage the creation of new stabilized housing.

The investment climate on multifamily buildings in New York City cooled sin 2019. We estimate that, within five years, more than a quarter of the city’s one million rent-regulated units will be under significant financial duress.

We predict that the policy changes to rent stabilization could reduce annual property tax revenue by almost $1 billion per year. That’s less revenue to pay the salaries of police officers,fire fighters, schoolteachers, and fund other public services that every New Yorker expects and deserves.

In December, REBNY filed an amicus brief in support of the constitutional challenge to the application of New York State’s rent regulations. We will continue to seek changes to the new framework in the upcoming legislative session.

REBNY continued to oppose the implementation of a prevailing wage mandate on the construction industry and was pleased that an expansion of current requirements was ultimately ot enacted.

REBNY members undertake private sector developments that are built with union labor and staffed with union building service workers. We support fair wages and benefits for workers across New York.

The State Legislature can and should take steps to ensure a living wage for all construction workers in New York, rather than passing legislation that would not achieve that goal and would instead exponentially increase forward with a recurring pied-aterre tax and instead agreed to make changes to the New York State transfer tax and the Mansion tax to raise revenue.

These tax changes will result in a substantial outflow of resources from the real estate sector to the region’s mass transit network.

REBNY will monitor the impact these tax changes and other tax and policy changes on the federal, state and city level will have on investment, job creation, and property tax revenue generation.

With that said, we appreciate that State leaders did not move forward with a misguided recurring pied-aterre tax that had the potential to have significant adverse impacts on job creation and property tax revenues.

REBNY supported the continuation of the partial tax abatement for cooperatives and condominiums, which was signed into law by the Governor in 2019. The extension of this program was essential to ensuring the equitable tax treatment of coops and condos.