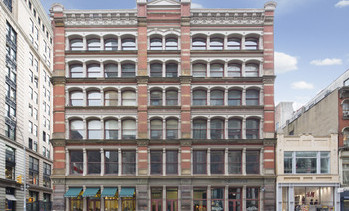 Donna Vogel of Newmark Grubb Knight Frank represented the ownership in the lease.

“We are delighted to welcome Thrive Global to our recently modernized office and retail building formerly known as 560 Broadway, a property that was infused with capital and has undergone a massive transformation,” said Steinwurtzel. “SoHo remains one of the premier luxury districts in Manhattan and the area immediately surrounding 100 Crosby continues to be one of the most sought-after locales in this neighborhood.”

Thrive Global’s three core components are: corporate trainings and workshops that bring the latest strategies and tools around health and well-being to organizations; a media platform that serves as the global hub for the conversation about well-being and performance with an emphasis on action; and, a commerce platform that offers a curated selection of the best technology and products for well-being. Together, the three components create an integrated behavior change platform that empowers people to make sustainable changes to their daily lives.

Built by Willam B. Astor II in 1884 as a store, Thomas Stent designed the Neo-Grec detailed façade which spans ten bays on Broadway, fourteen Bays on Prince Street and ten bays on Crosby Street.